ETF assets make up a sliver of these asset managers' overall business, but their own stock performance bears watching.

We spend a lot of ink (electrons?) in this column evaluating exchange traded products. Not much space is devoted to the issuers of these investments. We aim to rectify that oversight today. And we intend to look at these firms as investments in their own right. A couple have provided market-beating returns in 2019 and all seem poised for gains, to one degree or another, next year.

There are a half-dozen publicly traded ETP issuers in the S&P 500 Index: 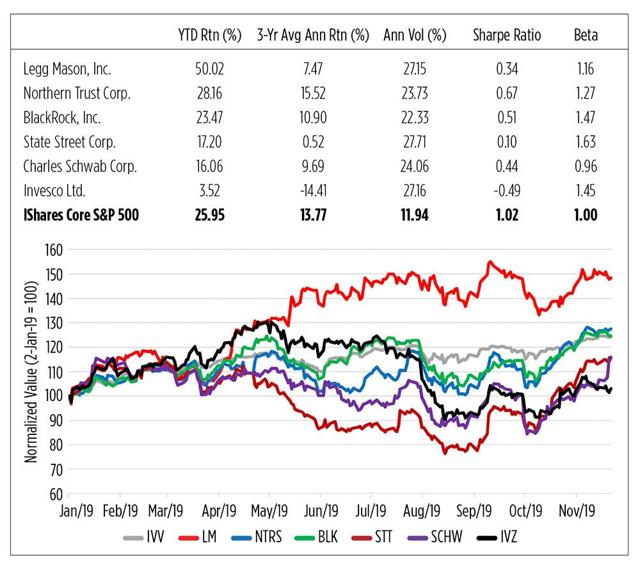 With a 50% gain, this year's top performer is Legg Mason, Inc. (LM). A relative newcomer to ETFs, Legg Mason launched its first exchange traded product suite in late 2015 and now sponsors 10 ETFs with combined assets of $830 million and an average expense ratio of 47 basis points. More than 70% of ETF assets are concentrated in a single portfolio - the Legg Mason Low Volatility High Dividend ETF (LVHD) - which has earned premium Sharpe and Sortino ratios over the benchmark iShares Core S&P 500 ETF (IVV).

No doubt, LVHD's launch was well-timed. LVHD appeals to investors seeking higher income than that offered by bond funds, together with the potential for inflation-beating capital appreciation. Since inception, the fund's market price has appreciated 32% as it spun off a 2.8% dividend yield.

Still, ETFs account for just 1% of Legg Mason's total managed assets, so it's hard to assess the real impact of these funds on its stock price. No matter, so far. There's a strong confluence in Legg Mason's and LVHD's price trajectory. Both are strong dividend plays and in today's market, that seems to be an ideal strategy.

Legg Mason has increased its dividend five times in the past five years for an average annual increase of nearly 20%. The most recent earnings report confirmed that the trend was likely to continue.

The other market-beater in the table is Northern Trust Corp. (NTRS). Twenty-nine ETFs with a combined heft of $16 billion are stabled under the Northern Trust banner. The largest is the $6.6 billion FlexShares' Morningstar Global Upstream Natural Resources Index Fund (GUNR), a fund that's gained 11% this year.

The average expense ratio for a Northern Trust ETF, at 37 basis points, is 10 ticks lower than Legg Mason's but the bottom-line impact is offset by the larger share of company assets in exchange-traded portfolios. For Northern Trust, 16% of assets are held by these funds. That may account, in part at least, for NTRS having the highest gross margin among S&P 500 financial services companies.

Legg Mason is now trading at the $39 level and seems likely to pause for some consolidation before making another advance. Technically, though, the upside appears limited to a challenge of the $42-$43 level.

While the big move seems behind Legg Mason now, Northern Trust is quite another story. Trading near $107, the Chicago-based money manager's stock has the potential for strong gains going forward. Northern Trust now seems to be readying for a test of $150, a 40% jump. If history is any guide, the stock will have to work its way upward. It could shape up as another market-beating performance. And an ETF-beating performance, too.

Brad Zigler
1.82K Followers
Brad Zigler's stints as a contributing editor for the Corporate Communications Broadcast Network, the Journal of Indexes, and CRB Trader set the stage for his role as managing editor of Hard Assets Investor and later as alternative investments editor of Wealth Management (formerly Registered Rep.) magazine, the most highly subscribed publication for financial advisors. Brad's feature articles have appeared in Registered Rep./Wealth Management, Mutual Funds, Financial Planning, Financial Advisor, Futures and Ticker magazines, TheStreet.Com and MarketWatch Web sites, and in journals published by Institutional Investor. After heading up marketing, research and education at the Pacific Exchange's (now NYSE Arca's) option marketplace and Barclays Global Investors, Brad became a financial correspondent for the European Press Network, and a Public Broadcasting System/National Public Radio affiliate. He continues his work as a financial research and communications consultant for a number of private and public organizations.
Follow
2 Comments