DouYu (NASDAQ:DOYU) remains one of the unique companies that are well-positioned for the secular growth trend in sports media. Following the Q3 results in which it reported an in-line revenue and a slight EPS beat, we believe that the current entry level remains attractive. We reiterate our bullish view on the stock, and $11/share target price, implying a 45% upside from the current level.

We believe that sports media is continuously being redefined by technology, hence we are bullish on the outlook for video game streaming as a whole given the shift in media consumption, changing preference/attitude towards sports and sports media, gaming as a form of mainstream entertainment and the emergence of eSports. DOYU and its peer HUYA (HUYA) are two key streaming platform pure-plays that give investors this kind of exposure. That said, we like DOYU’s positioning as a leading video game streaming platform in China which should allow it to ride on the eSports theme with upside in user monetization. However, we reiterate that the competitive risk from HUYA as well as from short-form video sites are two key concerns for investors to be aware of.

DOYU continues to deliver one of the best operating profiles in the industry with MAU growth of 15% to 164m of which mobile grew 26% to 52m, implying mobile penetration of 31%. Three factors drove the MAU increase: First, The International 2019, which is the annual Dota2 tournament that featured $34m in prize money and attracted almost 2m concurrent viewers, resulted in higher engagement on the platform. In addition, this high profile event also attracted a large number of previously inactive users. Second, given that Q3 had some overlap within the summer holidays when most of the younger viewers are off for the summer break, DOYU saw a large number of mobile viewership. Finally, and to a lesser extent, new mobile device launches from Huawei, Oppo and Vivo resulted in incremental engagement due to better viewing experience. 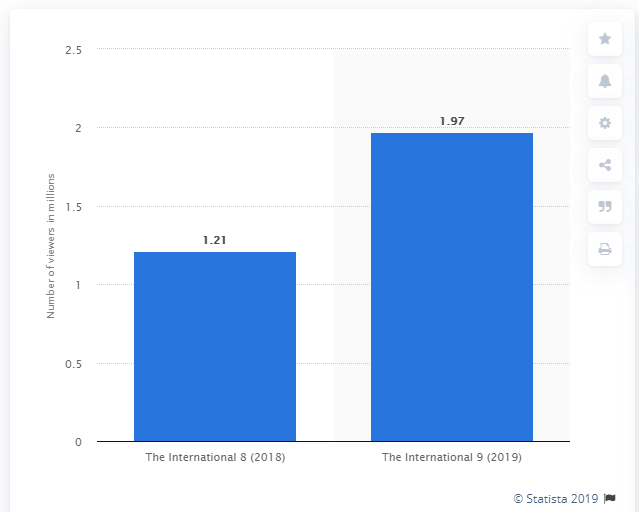 The rising viewership and improving engagement resulted in solid monetization with quarterly paying users growing 66% y/y to 7m which resulted in a 1.3ppt increase in paying ratio to 4.3% vs. 3% last year. In addition, ARPPU also saw a 10% increase to RMB237.

Key to DOYU’s monetization continues to center around fan and streamer engagement that promote users to pay via micro gifts. We note that back in August, DOYU launched a super fan club that was well received by the users, which resulted in better engagement and a higher-paying ratio. We expect DOYU to gradually build a virtuous cycle that deepens fan engagement to sustain its current monetization trend.

DOYU continues to invest in eSports by exploring both the upstream and the downstream of the total value chain. In Q3 alone, DOYU self-organized and live-streamed over 50 tournaments as well as broadcasted over 70 large-scale eSports events such as CS:GO Major Championship and The International 2019. Given the importance and the significance of these events within the eSports community, DOYU was able to attract a tremendous number of viewers and convert them into users.

Besides broadcasting, DOYU also signed several exclusive streaming partnerships with eSports teams in an effort to cultivate top streamers but more importantly create differentiated content to attract more paying users. Where we believe could be a bigger differentiator is the non-professional streamers that DOYU has been focusing on. We note that DOYU continues to sign exclusive contracts and leverage the talent agency model to maximize the effectiveness of its streamer management network. For example, DOYU is working closely with talent agencies to target the mid-tier and the long-tail streamers that may be overlooked but have great potential of becoming the next hit streamer. DOYU is able to obtain them at a lower contract cost while attracting bigger viewership and improving engagement.

We believe that DOYU is on the right track, but we cannot ignore the competitive risk from short-form video platforms such as TikTok and Kuaishou. So far, Kuaishou’s entrance into the game streaming market has not materially disrupted the competitive dynamic as short-form video sites only show the highlights of particular tournaments and games while platforms such as DOYU deliver a more comprehensive coverage. Although some viewers may just consume the highlights instead of the full content, we do not expect short-form video sites to have a significant impact against the more established sites.

Terracotta Investments
1.59K Followers
Many stocks are not well-covered by the traditional sell-side brokers in that their research lacks a proper view of the stock.The goal is to provide thought-provoking and actionable ideas on equities for investors globally.The focus will be on Chinese and US companies in the TMT and consumer sectors.
Follow