Will It Happen Again?

Human beings tend to remember emotional events, especially painful events. December 2018 falls into the painful category, given the S&P 500 (SPY) lost 14.92% between the end of November and Christmas Eve. Thus, it was unnerving for investors to see red screens in early December 2019. 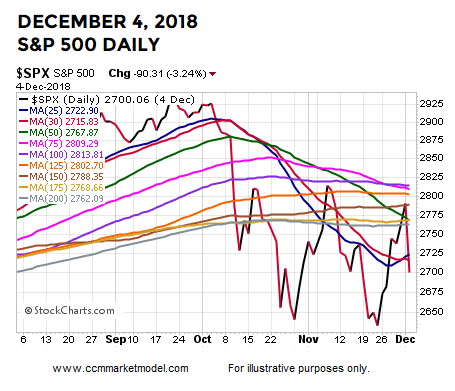 In the 2019 case, the S&P 500 (IVV) is trading above the 25, 39, 50, 75, 100, 125, 150, 175, and 200-day moving averages, which tells us large institutions are optimistic about future market and economic outcomes. If we were taking a technical analysis test and were asked is the chart below an uptrend or downtrend, we’d think that’s easy, choose uptrend, and move to the next question. In real time, it is a bit more difficult because of the news cycle and our personal biases; regardless, the answer is still easy and it is still uptrend. 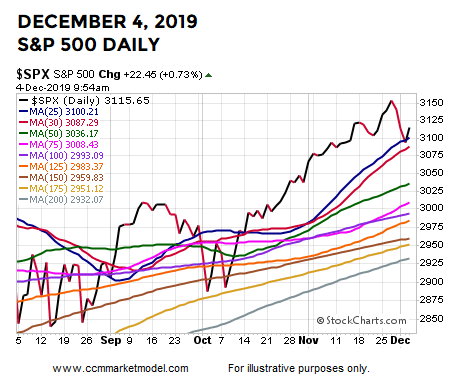 How About Weekly Trends And Momentum?

In the 2018 case, the S&P 500 was below a 50-week moving average that had a “we are concerned” look. Weekly MACD was in a “bearish cross” state and below zero, which told us the intermediate-term trend was at a higher risk of flipping to a sustained bearish trend. 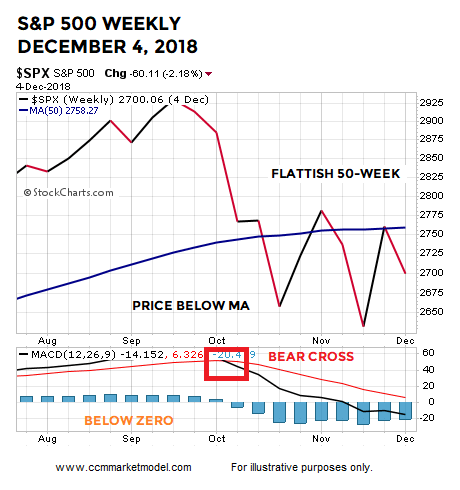 The concept of a mirror image comes to mind when comparing the 2018 chart above to the 2019 chart below. In the 2019 case, the S&P 500 is above the 50-week moving average that has a “we have been getting more confident” look. Weekly MACD is currently in a “bullish cross” state. Weekly MACD is above zero, which tells us the intermediate-term trend is up and recent pullbacks have been countertrend moves. 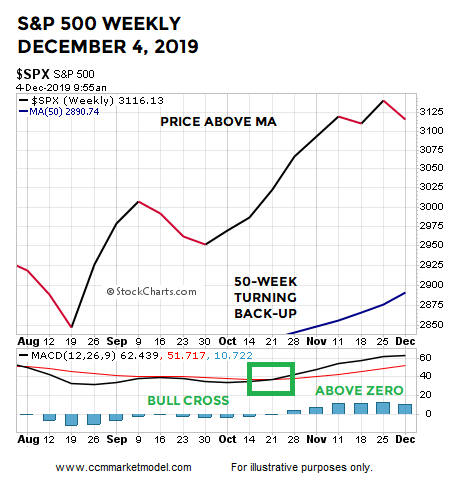 On December 4, 2018, the S&P 500 was below a “flattish to in jeopardy of rolling over” 10-month moving average. The market had recently experienced a bearish monthly MACD cross, telling us a bearish countertrend move was taking place. 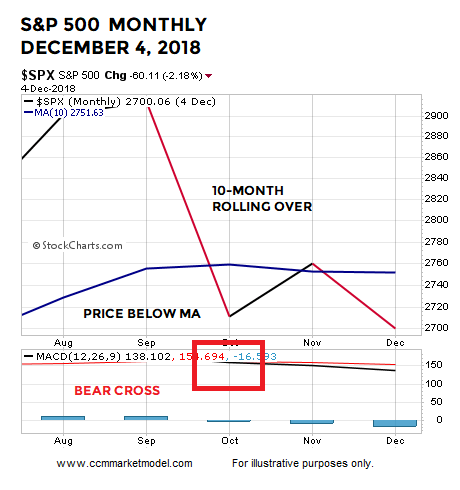 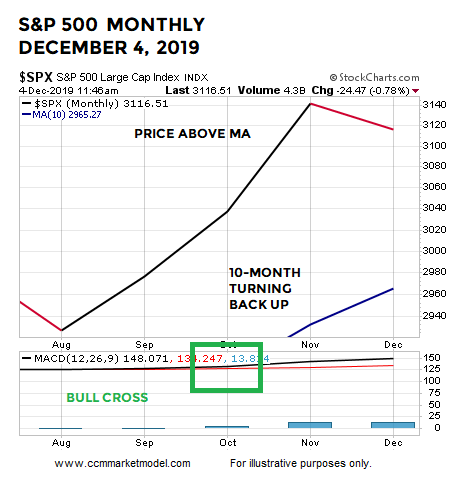 It is extremely important to note, the look of all the 2018 charts shown above was BEFORE the S&P 500 lost an additional 12.64%, telling us the odds of really bad things happening was significantly higher a year ago relative to the present day.

These Concepts Were Helpful In January 2019

Charts cannot predict the future; they simply help us assess the probability of good things happening relative to the probability of bad things happening. December 2018 was the worst December since 1931 and the plunge in Q4 was rare from a magnitude perspective. It would have been easy to remain in cash for the first few months of 2019, given the weak data on December 31, 2018 and the severity of the Q4 2018 decline. Charts like the ones shown above were helpful in terms of helping us get back in line with the market. For example, the charts below were covered in a January 11, 2019 video and presented as part of a bull/bear road map that proved to be valuable throughout 2019. 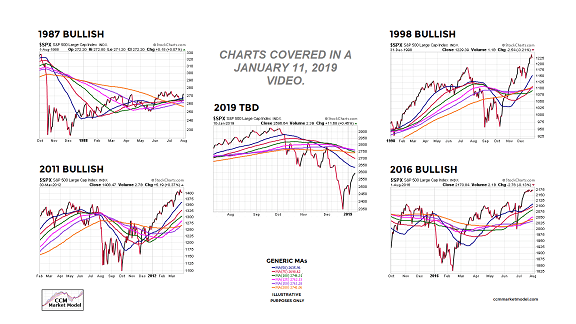 The chart in the middle of the image above is dated January 10, 2019. If we looked at the same chart on April 1, 2019 (below), we can see how the evidence gradually improved between January 10, 2019 and April 1, 2019. The chart below said the odds of a sustainable uptrend were quite a bit better on April 1 relative to early January. Thus far, the uptrend has remained in place, meaning the April 1 chart was helpful. 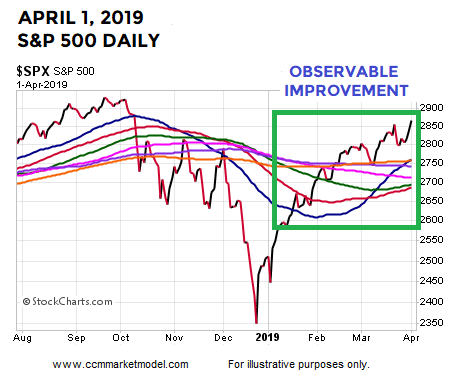 Other Forms Of Helpful Evidence In 2019

Moral of The Story

The evidence we have in hand continues to favor higher highs in the months ahead relative to a prolonged series of lower lows in the stock market (VTI).

Chris Ciovacco
9.64K Followers
Chris Ciovacco is the founder and CEO of Ciovacco Capital Management (CCM), an independent money management firm serving individual investors nationwide. The thoroughly researched and backtested CCM Market Model answers these important questions: (1) How much should we allocate to risk assets?, (2) How much should we allocate to conservative assets?, (3) What are the most attractive risk assets?, and (4) What are the most attractive conservative assets? Chris is an expert in identifying the best ETFs from a wide variety of asset classes, including stocks, bonds, commodities, and precious metals. The CCM Market Model compares over 130 different ETFs to identify the most attractive risk-reward opportunities. Chris graduated summa cum laude from The Georgia Institute of Technology with a co-operative degree in Industrial and Systems Engineering. Prior to founding Ciovacco Capital Management in 1999, Mr. Ciovacco worked as a Financial Advisor for Morgan Stanley in Atlanta for five years earning a strong reputation for his independent research and high integrity. While at Georgia Tech, he gained valuable experience working as a co-op for IBM (1985-1990). During his time with Morgan Stanley, Chris received extensive training which included extended stays in NYC at the World Trade Center. His areas of expertise include technical analysis and market model development. CCM’s popular weekly technical analysis videos on YouTube have been viewed over 700,000 times. Chris’ years of experience and research led to the creation of the thoroughly backtested CCM Market Model, which serves as the foundation for the management of separate accounts for individuals and businesses. Copy and paste links into your browser: Market Model: http://www.ciovaccocapital.com/sys-tmpl/ccmmarketmodel/ More About CCM: http://www.ciovaccocapital.com/sys-tmpl/aboutus/ YouTube: http://www.youtube.com/user/CiovaccoCapital Twitter: https://twitter.com/CiovaccoCapital CCM Home Page: http://www.ciovaccocapital.com/sys-tmpl/hometwo/
Follow

Disclosure: I am/we are long SCHX. I wrote this article myself, and it expresses my own opinions. I am not receiving compensation for it. I have no business relationship with any company whose stock is mentioned in this article.