Nigeria seems fully committed to the implementation of its quota as agreed with OPEC+. According to the country's minister for state of petroleum, Nigeria's compliance has improved since August. Production of crude stood close to 1.8 million b/d in October, much lower than the 1.96 million b/d produced in June, when production from the new Egina field ramped up. Lagos has been arguing that Egina barrels should be excluded since condensate is not subject to OPEC limits.

The country's grades remain popular, with the export programme for December already down to its last cargoes, as the global market remains quite thirsty for both lighter and heavier Nigerian barrels. Improved demand has been supported by robust gasoline cracks and price increases in competing grades. Demand for West Africa's few heavy sour grades is quite strong as shipping hubs get prepared for 2020. Prices for Bonga and Egina reached record highs as refiners target grades producing more low-sulphur fuels.

Meanwhile, China has been importing more crude oil from West Africa, but primarily Angola, with flows having reached 1.48 million b/d according to IHS Markit Commodities at Sea. In total, Asia has been importing around 2.4 million b/d of West African crude oil so far in 2019. India and the rest of Asia have been absorbing more during the last couple of months, while flows to North West Europe remain strong.

In parallel to the production cuts and the decreasing flows from Saudi Arabia to the rest of Asia (excluding China), the continent had to rely more on alternative suppliers, with West Africa having partially filled the gap after Venezuela's collapse. Asia's appetite for West African grades has also been supported by oil prices, with Middle Eastern oil having become relatively more expensive compared to other grades. 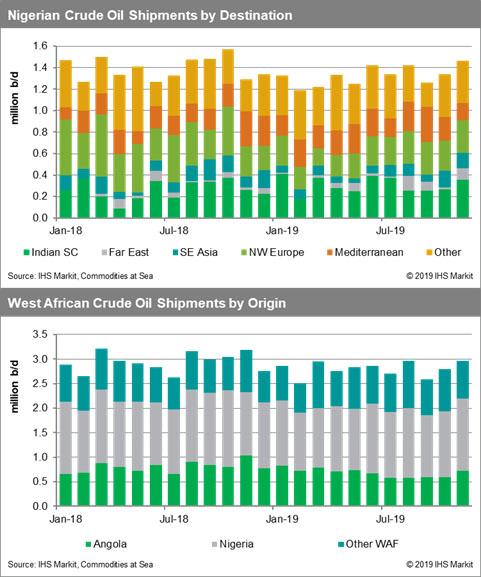 Markit
2.3K Followers
IHS Markit (Nasdaq: INFO) is a world leader in critical information, analytics and solutions for the major industries and markets that drive economies worldwide. The company delivers next-generation information, analytics and solutions to customers in business, finance and government, improving their operational efficiency and providing deep insights that lead to well-informed, confident decisions. IHS Markit has more than 50,000 key business and government customers, including 80 percent of the Fortune Global 500 and the world’s leading financial institutions. Headquartered in London, IHS Markit is committed to sustainable, profitable growth.
Follow
3 Comments
To ensure this doesn’t happen in the future, please enable Javascript and cookies in your browser.
Is this happening to you frequently? Please report it on our feedback forum.
If you have an ad-blocker enabled you may be blocked from proceeding. Please disable your ad-blocker and refresh.