New York (December 4) - We have warned about the risk of China’s Offshore Corporate Dollar Bonds since at least January of last year. Our fears then were based on reportage from November 2018, by the South China Morning Post warning of $3 trillion in OCDB and warnings by Nomura Securities.

The risks about which we have warned have become more acute in the last several weeks.

Late last month, Bloomberg reported that Tewoo Group Co., Ltd., a state-owned conglomerate with interests in infrastructure, logistics, mining, autos and ports in China, with a footprint in Singapore, Japan, the USA and elsewhere that ranked 132nd in 2018’s Fortune Global 500 list, is set to default on more than $2 billion in OCDBs.

It is telling that Tewoo, a state-owned enterprise, is in default, as it likely signals Beijing is unwilling or unable to grant carte blanche guarantees of SOEs, particularly those owned by municipal or provincial governments. That should concern holders of Chinese debt and others with exposure to Chinese debt. Other state-owned or state-affiliated enterprises are also likely to default. It was reported only today that state-owned Peking University Founder Group - rated AAA - had defaulted on a debt payment, citing a liquidity crunch. According to Fitch, the default rate for private, non-state businesses in China was a record 4.5%. The rate for state-owned companies is just 0.2%, owing to government guarantees. It is reported that China’s businesses had defaulted on $17.3 billion worth of bonds so far this year and will almost certainly exceed last year’s record defaults. While these annual defaults amount to just a small portion of the country’s $4.4 trillion onshore debt market, there is risk of contagion and, as always with China, a risk from its chronic lack of financial transparency. The slowing Chinese economy has likely reduced the value of leveraged assets for yuan debt as well.

(Source: YCharts USD:CNY for One Year)

The precipitous decline in the value of the yuan relative to the dollar puts additional pressure on OCDB. Moreover, word this week that President Trump is prepared to wait on a China trade deal might further reduce the USD:CNY rate, as China has, in the past, reduced yuan values to accommodate US tariffs while maintaining stable US consumer prices for its exports. Investors should beware high-yield China bond funds and search out reliable alternatives with lower risk if the funds have high exposures to Chinese bond debt. Financial institutions and bond funds with significant OCDB exposure should be monitored very closely, especially for signs they could be affected by contagion. The risk is greater because of the increasing appetite for banks, funds, and institutions to invest in China debt because of its higher yields. 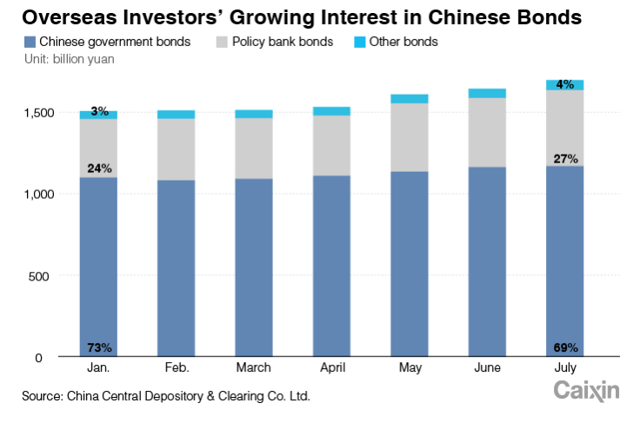 Note: Our commentaries most often tend to be event-driven. They are mostly written from a public policy, economic, or political/geopolitical perspective. Some are written from a management consulting perspective for companies that we believe to be underperforming and include strategies that we would recommend were the companies our clients. Others discuss new management strategies we believe will fail. This approach lends special value to contrarian investors to uncover potential opportunities in companies that are otherwise in a downturn. (Opinions with respect to such companies here, however, assume the company will not change.) If you like our perspective, please consider following us by clicking the "Follow" link above.

Additional disclosure: The views expressed, including the outcome of future events, are the opinions of the firm and its management only as of today, December 4, 2019, and will not be revised for events after this document was submitted to Seeking Alpha editors for publication. Statements herein do not represent, and should not be considered to be, investment advice. You should not use this article for that purpose. This article includes forward looking statements as to future events that may or may not develop as the writer opines. Before making any investment decision you should consult your own investment, business, legal, tax, and financial advisers.