HC2 Holdings (HCHC) is an investment holding company founded in 2014 by Philip Falcone. After publishing a string of positive news for the stock in October 2018 (the initiative to explore "strategic alternatives" for Global Marine, the acquisition of GrayWolf Industrial for the construction business subsidiary and the breakthrough-status device granted to MediBeacon), I recommended going long the stock. However, a sudden tightening in capital markets in November coincided with HC2's long-awaited debt refinancing, forcing the company to issue new debt at even higher costs and pushing the share price down, as investors were disenchanted with the prospects of holding longer a story that has been frustrating for the last four years. The increasing lack of coverage of the name at Seeking Alpha is, I think, testimony of the mood among investors.

Although undoubtedly Falcone's timing in restructuring the debt was poor (but it must not be forgotten that the bonds had a steep early-call provision at the time, so it was reasonable to wait a little longer to refinance the bonds), the operational performance of the different businesses has been really good, but the shares have been overwhelmed by the weight of a very high-cost capital structure, and they will not rebound unless investors see a material path to deleveraging.

In this article, I will refresh the investment case, the operational performance of the various subsidiaries, the main news over the last twelve months as well as providing an update of the sum-of-the-parts valuation of the company. The bottom line: the valuation I presented last year has barely changed (actually, it has increased mainly due to Continental Insurance and MediBeacon), because the value of the different businesses is either crystallizing (Global Marine) or becoming more obvious (Continental Insurance, Pansend). We may be near an inflection point in the story when (and if) the rest of the Global Marine business is sold (presumably, before the end of the year) to deleverage the capital structure.

I will not go into the detail of HC2's different businesses - but a reader with insufficient background can check my previous article from a year ago. Rather, this article is an update of my previous thesis and so I will comment on the most important news of the last twelve months:

As I mentioned last year, it is worth remembering that Philip Falcone is an investor with longer time horizons than most other investors, so some of his ideas take time to materialize. This is the case with the recently formed broadcasting subsidiary, which in the last conference call Falcone mentioned that it will still take some time until they have a fully-fledged portfolio of stations ("we may look to acquire trade or sell stations in certain circumstances to optimize our geographic breadth and depth"), so some of HC2's businesses are still in the building phase. In some of these cases, a valuation is hard to come by, and Falcone is the best assurance that some of them will play out (bet on the jockey).

In this section, I provide an update of the valuation I undertook last year. The numbers are updated as of the end of 3Q'19 but adjusted for the sale of HMN. As I indicated last year, SoTP valuations have some drawbacks, such as: i) uncertainty about value realization, ii) lack of disclosure and relevant financials to correctly value some of the subsidiaries and iii) under the bearish and the bullish scenarios, you end up piling up pessimistic and optimistic assumptions, one on top of the other, so the NAV is distorted. Here I will take the base case scenario as a target price and will apply a 20% discount to reflect the uncertain timing of the deleveraging.

Some comments to the valuation update:

I arrive at a valuation of $12.8 per share, a number very much in line with the one I reached a year ago (after the 20% discount mentioned above the target price would be roughly $10 per share). In other words, the NAV has not changed much over the last year, but I would argue that its quality has: i) the integration of GrayWolf so far has been smooth, ii) the value of Global Marine has been partially crystallized and with more to come, and iii) the insurance business has proven to be a positive contributor to the results (at least so far).

The valuation is as follows: 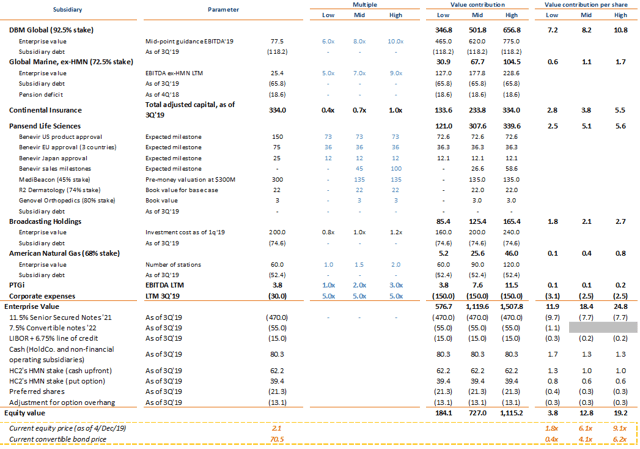 After the full sale of Global Marine, HC2 will begin to dent its heavy capital structure, and that may be the trigger the share price needs in order to reflect the current reality of HC2's subsidiaries' performance. Even if only the $100M raised with the sale of HMN (and not additional proceeds from the full GMS sale are assumed) is applied to reducing the 1st liens, around $95M of debt will be reduced (there is an early call provision until June '20 at 104.5), implying a reduction in interest payments of $11M. The full sale of GMS would bring interest payment savings even higher. And, as pointed in the 3Q'19 Conference Call, some creative partial monetization (i.e. releasing excess capital) of Continental Insurance cannot be ruled out.

It is important to note, however, that capital markets for distressed debt remain somehow shaky, so the sooner HC2 tackles the balance sheet the better in order not to repeat the missteps of 2018. Falcone is a savvy investor and is well aware of the problem, but so far, the task has been proven to be elusive. Nonetheless, I am optimistic that 2020 may finally be the year where all the pieces of HC2's balance sheet puzzle come finally together.

Disclosure: I am/we are long HCHC. I wrote this article myself, and it expresses my own opinions. I am not receiving compensation for it (other than from Seeking Alpha). I have no business relationship with any company whose stock is mentioned in this article.