A good case can be made that given the current state of the economy, as captured on the BaR Analysis Grid©, a recession is extremely unlikely to occur in the next 12 months, and probably beyond that.

In my July 2019 Seeking Alpha article, based on the position of the MoC on the BaR Analysis Grid© at that time, I wrote that if the economy were to start falling apart then, and I mean seriously falling apart, a recession was unlikely for at least a year and a half, which would be the end of 2020.

At the end of September, in my last article, I pointed out that although there is growing weakness in the economy, there was a range of favorable indicators that countered negative trends. These positive elements included:

In the most current BaR Analysis Grid©, shown in Grid 1, the mean of coordinates (MoC) remains well above the baseline (recession threshold). At the end of September, the MoC was 24.5% above the baseline. The MoC is now 22.9% above the baseline, a 6.5% decline in two months. (If you are not familiar with the BaR, read more here.) 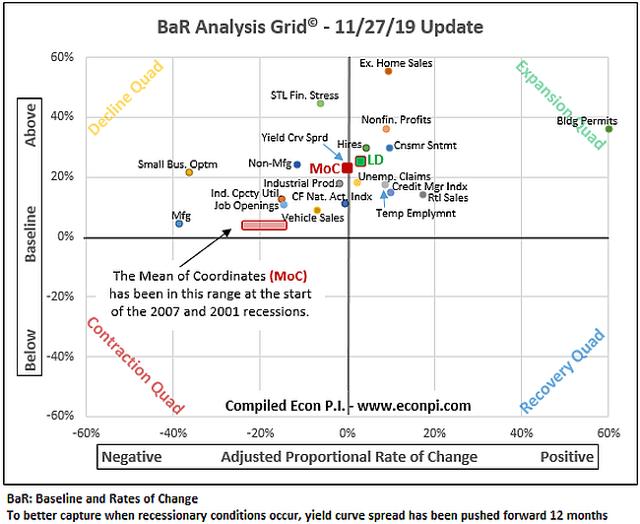 When the leading indicators drop below the MoC, the MoC will begin a more rapid deterioration, signaling a distinct weakening of economic activity and/or sentiment.

MoC position prior to previous recessions

Table 1 shows that the MoC was 20.3% above the baseline one year before the start of the last recession. At that time, the MoC was plotted with all but one of the indicators that are now used on the BaR. This suggests that the MoC levels for the current business cycle and the previous ones should be fairly consistent. That is not true for earlier business cycles when not as many economic measures were tracked and the composition of the MoC was based on fewer indicators.

With the MoC currently at 22.9% above the baseline, this indicates that even if the economy were to now fall apart, a recession in 2020 is unlikely. Strengthening that outlook is the fact that the housing bubble had burst prior to the last recession, leading to a financial crises that accelerated the economy into a severe recession. There is not a comparable asset bubble ready to erupt at this moment, nor is there likely to be over the next year. In my last article, I addressed the concern about student and auto loan delinquencies, neither of which pose a threat that is anywhere near the danger of the housing or dot.com bubbles.

Of the favorable factors I identified earlier, the first four bullets – deficit spending, interest rates, asset bubbles, and energy prices – have not substantially changed from September.

For the remaining items on the bullet list, in Table 2, I’m showing the percent change over the last three months and year-over-year. For real weekly median earnings, the dollar amount is being used because it isn’t an indicator that is tracked on the BaR. The other indicators are tracked on the BaR. For them, the percent that the MoC is above the baseline is being shown. In addition to the indicators I bulleted earlier, I’m adding private building permits. Housing is another sector that continues to plod along favorably as interest rates remain low.

Building permits have trended particularly well over the past three months, which is consistent with other housing indicators. Low interest rates benefit this sector of the economy.

The bottom line for the indicators shown in Table 2 is that there are sectors of the economy that are still improving or holding strong. As long as this continues, the leading indicators are likely to stay above the MoC because corporate profits, the STLFSI, unemployment claims, and building permits are included as leading indicators on the BaR. Favorable trends for these indicators signal that the economy will continue with a slow unwind, at least for now.

Household debt has been improving

In addition, as shown in Chart 1, household debt as a percent of GDP continues to decline. If the economy were to slow, debt levels are substantially lower than they were prior to the last recession. This will help keep the economy plodding along and soften the blow of a recession when it hits. 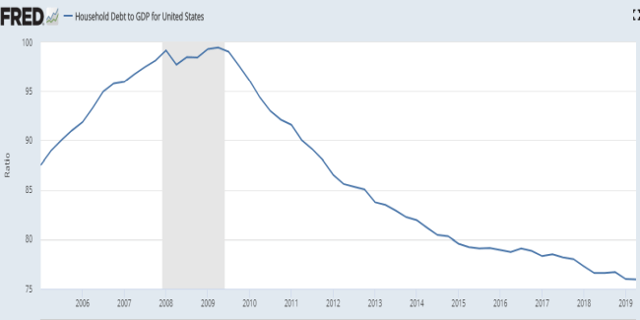 Why recession timing is important

Table 4 shows some of the most severe market corrections that occurred without a recession. The average decrease of these worst-of-the-worst corrections is 17.3%, almost half of the average for recession-related market crashes. Still, there are some serious corrections shown in Table 4, and investors spend great effort trying to forecast these types of business cycle corrections. Knowing when a recession is near makes forecasting a stock market crash quite simple.

Historically, as shown in Table 5, the stock market crashes that happen just before recessions, on average, occur just 1.5 months before the official recession start. If we exclude the crash before the 2001 recession, which came earlier than normal because of the dot.com bust, the average time of the crash before a recession is only 0.6 months. Whether the stock market will peak just before the next recession is yet to be seen, but the historical evidence suggests it is likely. 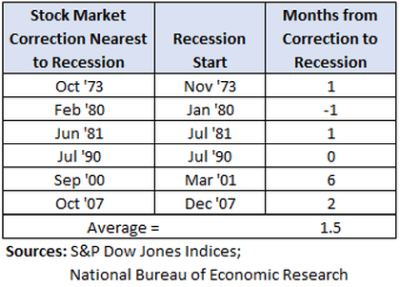 Consequently, if a recession is 12 or more months out, then the stock market is unlikely to peak until shortly before then. The movement to a new peak in 2020 may be similar to what was seen in 2019 - mostly sideways with some sharp corrections.

The first thing to watch for on the BaR is when the leading indicators move below the MoC. As I stated earlier, this will indicate greater weakness in the economy. But, such an event won't signal an immediate recession. As those who follow the BaR know, there are numerous mini-cycles during a business cycle. We may still be two or three mini-cycles away from the last fatal cycle before a recession.

The second thing to watch, is when the MoC gets below 20%. At that level, the economy has probably reached a point where recovery is difficult. This isn't saying that the BaR is predictive. Rather, it identifies a point at which recessionary conditions are building.

However, this business cycle is unique. We can't rule out that Trump may finally realize that trade is good for the U.S., and if interest rates stay low and the global economy gets back on track, the MoC could maintain its current position, or even move upward.

Yet, this goes back to mini-cycles. After a favorable cycle, when most indicators will peak, they will then stall or decline. During the downside of a mini-cycle, if the MoC is near 20%, it could drop to 15% above the baseline. When it gets to that level, history suggests a major slowdown or recession is likely, but it is probably not imminent. Looking back at Table 1, when the MoC hits 15%, the period until a recession could be around six months.

This doesn't mean there will positively be a recession six months after the MoC goes below 15%. Just that it is possible. A shot across the bow, so to speak. Something investors should know.

David Rice
985 Followers
My career has involved developing and contracting with health care delivery systems. I currently work at a small college, focusing on my economic and market interests. I've developed the Econ P.I. website (www.econpi.com) to accurately show economic conditions and determine how financial markets might be impacted.
Follow