CBL Properties (NYSE:CBL) put out a press release announcing the suspension of dividends on both common and preferred stocks through the end of 2020. The preferreds dropped about 40% on this news. Was this reaction appropriate and what impact does this move have on fundamental value? This article will explore the investment outlook for CBL preferreds.

Preferred dividend suspensions are rather rare among REITs, so many investors may not be aware of all the mechanics of the situation. Thus, we shall begin with a quick overview.

Most REIT preferreds are cumulative, and this is the case with CBL's preferreds as seen in their 10-K.

The only scenario in which the preferred holders are not eventually paid $25 plus accrued dividends would be if there is simply not enough capital to pay them. For example, if there is a liquidation bankruptcy and the proceeds do not go far enough down the waterfall to make the preferreds whole. Whatever value goes beyond the debt will be split pari passu between the preferreds. At this moment, there looks to be enough value to fully pay off the preferreds with enough left over for the common to get a nice payoff. That said, bankruptcy looks unlikely to us.

Source of the dividend suspension

I believe much of the price drop was related to the market reading into the announcement. There is a general assumption that when a company cuts or suspends its dividend that it is a sign of fundamental troubles. That may often be true, but in this instance, I believe the market has badly misread the situation.

The board of director's fiduciary duty is to common shareholders, so debt holders usually only have the power to influence decisions when the company is in trouble and covenants have been breached. If the company is not trying to get its debt renegotiated, there is no reason for the board to do anything for the bondholders.

In CBL's case, most of the decision-making power rests in the hands of Michael Ashner, an activist investor who holds a large chunk of common shares. He was recently granted board seats and has significant influence in the company's efforts to turn things around fundamentally.

In our experience, Michael Ashner is highly skilled with troubled real estate. We owned Winthrop Realty as Ashner used his role as CEO and profitably liquidated the company's assets resulting in significant gains for shareholders. CBL management has responded amicably to his presence and seems to be working with him toward the shared goal of turning the company around.

We suspect the decision to suspend the preferred dividend was approved or perhaps even introduced by Michael Ashner. While the common is not fully aligned with preferreds, both classes benefit from the same outcome. As a large common holder, Ashner must be banking on the common eventually getting paid through either a favorable liquidation of the portfolio or a reinstatement of dividends. On either pathway, the preferreds are made whole first.

In our opinion, the most likely outcome is that the capital saved from not paying the dividends will go toward redevelopment and this will eventually help the company turn around. 2020 looks to be the year of bottoming with 2021 being the first year of positive organic growth. Most of the redevelopments are completing late in 2019 or during 2020 after which it will take a bit of time to backfill vacancies and improve occupancy. It will be a slow recovery and it could be a few years before dividends are reinstated. Given the extreme upside to eventually being made whole, I am happy to wait, however, long it takes.

The other outcome is that CBL no longer sees a path to long-term recovery and begins to liquidate its portfolio. In this scenario, the outcome for preferreds depends on the value gleaned from the assets.

From the perspective of the preferred, secured debt and unsecured debt are both senior, so we lump them into a single liabilities bucket along with other obligations such as accounts payable. CBL has paid off a substantial amount of debt in recent years with liabilities now sitting at $3.959B. 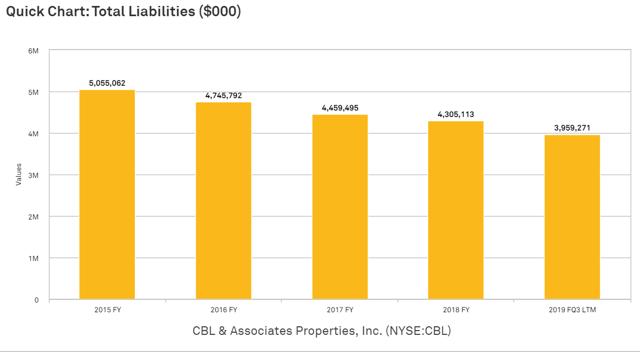 The preferreds have a combined liquidation preference of $626.25mm.

Thus, to be made whole, the preferreds would require properties to have at least $4.585B of liquidation value (liabilities plus preferred liquidation preference).

With LTM NOI of $534.8mm (NOI number from SNL Financial), property values are as follows depending on cap rate.

Even with a 12% cap rate, the preferreds are made mostly whole each getting about $20 per share.

This basic NOI valuation does not take into account the value of assets that are not currently generating NOI such as CBL's renovation pipeline. 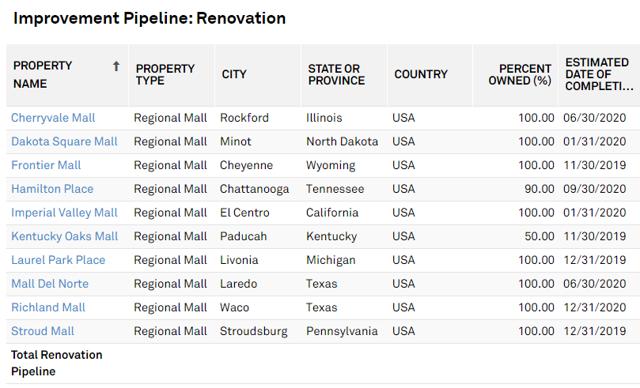 It also does not include CBL's roughly $35mm of cash.

Bears may counter the property value argument with the following chart. 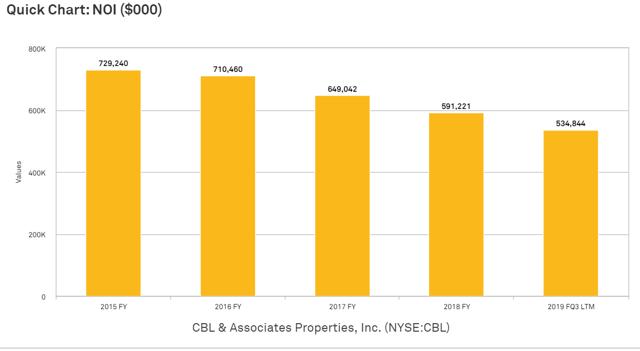 If this trend is extrapolated, one could argue that NOI is going lower which would reduce future property value.

However, we must remember the reasons why NOI has fallen so much.

The current reduced state of rents suggests renewals going forward will be in a positive direction and vacancies can be filled which would increase NOI.

I think the most overlooked concept is that the culling of weaker assets reduces the market cap rate of the remaining portfolio. CBL's portfolio is not monolithic in nature. It has some strong assets, some acceptable assets and some weak assets with cap rates ranging from 6% to as much as 20%. Most of the 20% cap rate type assets have already been sold or foreclosed upon.

Thus, while CBL's NOI has gone from $730mm to $534mm, the quality of that NOI has greatly increased. Its former portfolio may have gone for a cap rate closer to 14%, but its current portfolio looks to be worth closer to a 10% cap rate.

If one gets made whole, this represents a roughly 350% gain plus over 30% from accrued dividends for each year you have to wait. Thus, the market is projecting a very low chance of recovery.

We see recovery through fundamental turnaround as slow, but likely. Even if that fails, the outlook in liquidation appears to be better than $5.50 a share. Thus, we see CBL preferreds as opportunistic.

2nd Market Capital and its affiliated accounts are long CBL, CBL-D, and CBL-E. I am personally long CBL and CBL-E . This article is provided for informational purposes only. It is not a recommendation to buy or sell any security and is strictly the opinion of the writer. Information contained in this article is impersonal and not tailored to the investment needs of any particular person. It does not constitute a recommendation that any particular security or strategy is suitable for a specific person. Investing in publicly held securities is speculative and involves risk, including the possible loss of principal. The reader must determine whether any investment is suitable and accepts responsibility for their investment decisions. Dane Bowler is an investment advisor representative of 2MCAC, a Wisconsin registered investment advisor. Commentary may contain forward-looking statements that are by definition uncertain. Actual results may differ materially from our forecasts or estimations, and 2MCAC and its affiliates cannot be held liable for the use of and reliance upon the opinions, estimates, forecasts, and findings in this article. Positive comments made by others should not be construed as an endorsement of the writer's abilities as an investment advisor representative.

Conflicts of Interest. We routinely own and trade the same securities purchased or sold for advisory clients of 2MCAC. This circumstance is communicated to clients on an ongoing basis. As fiduciaries, we prioritize our clients' interests above those of our corporate and personal accounts to avoid conflict and adverse selection in trading these commonly held interests.

Disclosure: I am/we are long CBL, CBL.PE. I wrote this article myself, and it expresses my own opinions. I am not receiving compensation for it (other than from Seeking Alpha). I have no business relationship with any company whose stock is mentioned in this article.

197 Comments
To ensure this doesn’t happen in the future, please enable Javascript and cookies in your browser.
Is this happening to you frequently? Please report it on our feedback forum.
If you have an ad-blocker enabled you may be blocked from proceeding. Please disable your ad-blocker and refresh.