We all know what a PMI is - a purchasing managers index - and why we might be interested in it. It's one of our few forward looking measures of how the economy will do in the immediate to near future.

However, we do need to be careful about how much weight we put upon the results from the survey. Especially so in the US where there are two such surveys and one, historically, has been much more accurate than the other. The slight problem being - or the opportunity if you prefer - that it's the less accurate one that carries the greater weight currently.

Thus we should disregard the market reaction to the current numbers - or, if you prefer again, trade against it - and react instead to the more accurate numbers.

Just a couple of examples of how the latest numbers are being reported:

Manufacturing activity continued to lag in November amid a decline in inventories and new orders, according to the latest ISM Manufacturing reading released Monday.

Stocks fell on the report, with the Dow Jones Industrial Average off more than 200 points in late morning trading.

That wouldn't be an inappropriate reaction if the number were correct of course. Another example:

November manufacturing output remained below par for the fourth consecutive month, according to data issued by the Institute for Supply Management (ISM), in its Manufacturing Report on Business, today.

It's entirely true that this is what the Institute of Supply Management version of the manufacturing PMI is reporting. We can see it here:

Moody's Analytics then gives us this:

U.S. manufacturing continues to struggle given the weakness in the global economy, past appreciation in the U.S. dollar, and trade tensions. The ISM manufacturing survey slipped from 48.3 in October to 48.1 in November, weaker than either we or the consensus anticipated. 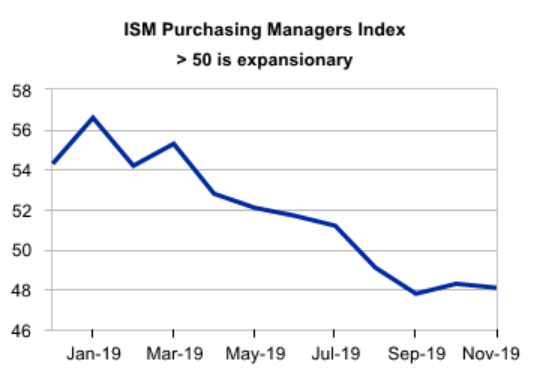 (US manufacturing PMI from Moody's Analytics)

Well, yes, but is the number accurate?

That's the big question for us, is this number accurate? It's more than a little out of line with what we've got from other sources. For example, last quarter GDP growth was at 2.1%, this is indicating 1.5%. That would be a substantial slowdown. And, well, really?

The thing being we've got another manufacturing PMI for the US.

We have this other attempt at reading the same data from the economy. The sample and survey is different but it is trying to understand the same phenomenon. It's also giving a rather different reading:

This is not just a mild difference. 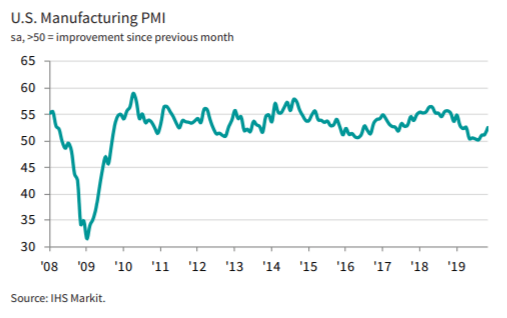 (US manufacturing PMI from IHS Markit)

One is showing deterioration at the same old pace, the other is showing expansion and an expansion that is getting gradually faster. This is a significant difference.

So, who to believe?

We cannot say that either is absolutely correct of course. Any survey of anything as large as the US manufacturing sector is going to have a margin of error. But we do know something more about this.

This isn't the first time that there's been a divergence between the two numbers. Which means that we've also already got an explanation for it. It's in the population being surveyed here. The ISM surveys only members of the Institute of Supply Management. This, by the very nature of older business organizations and professional bodies means a weighting toward older and larger companies. IHS Markit is instead at least attempting to have a properly weighted sample of the whole economy.

We'd expect the second to be more accurate but expectations aren't proof. The thing is we can see how this has influenced readings in the past:

The surveys use different panel structures: ISM data are based only on ISM members, and as such are likely to only reflect business conditions in larger companies, with small- and medium-sized firms under-represented. In contrast, IHS Markit's survey includes an appropriate mix of companies of all sizes (based on official data showing the true composition of manufacturing output).

We can also test this: 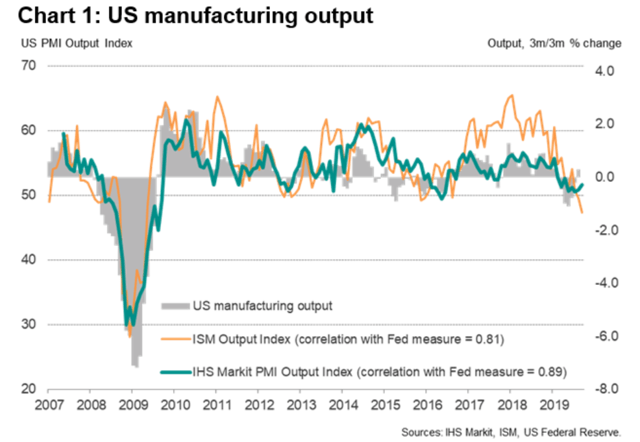 I am convinced that the IHS Market reading is more accurate here. The ISM is being overly gloomy, relying as it does on responses from larger and older companies.

Given the difference between the readings I don't therefore think that US manufacturing output is shrinking at all, I read it as being a gentle expansion.

If manufacturing output is falling then we might expect the Fed to do something about it. Or, even, that we'd better be prepared for a fall in reported GDP. Which is how the market has responded to these figures.

However, if IHS Markit is right then we've got an expansion going on. This makes Fed action less likely and, obviously, we've got better GDP growth. This is thus a buying opportunity. The market is depressed by the statistic people are believing, that statistic which is misleading.

The economy is doing better than ISM is measuring. Act accordingly.