Since publishing our short thesis on Seeking Alpha in March 2019, emerging markets solar developer and independent power producer (IPP) Scatec Solar ASA (SSO:NO and STECF:US) has not behaved as we had expected. Shares have rallied ~25-30% to new all-time highs despite a koldtbord (Norway's version of the smörgåsbord) of new risks to project economics and policy compounded by the impending threats detailed in our prior article.

Previously, we focused on the elevated risk of slashed subsidies on Scatec's existing South African assets (which government officials reiterated as recently as December 3, 2019) and of eroded projects economics on Egyptian assets due to elevated costs. We provide further damning evidence on these factors below. However our short thesis has been further buttressed by a bountiful koldtbord of new risks which have surfaced over the nine months since last publishing.

We suspect that investors remain largely unaware of these as the sell-side continues to promote Scatec while ignoring any evidence that counters their bullish view.

Esplanade views the likelihood that South Africa renegotiates above-market renewable energy power purchase agreements ("PPA") (including Scatec's 190MWs) of generously subsidized solar assets as even greater than when we posted our March 2019 piece. As we were about to post this update on December 3, 2019, South African government officials publicly reiterated their push to renegotiate "costly renewables contracts".

Given shares sit near all-time highs, Scatec shareholders are discounting a much more optimistic scenario for the most profitable assets in the company's operating portfolio (representing 16% of operating megawatts but ~25% of Power Production segment TTM EBITDA).

Though we applaud management for finally recognizing that South Africa will likely slash overly generous PPAs, we believe this likely restructuring could bankrupt the 190MWs of solar assets by impairing its ability to service debt.

Today, Scatec receives ~US$0.21 from Eskom for each kilowatt-hour produced at its 190MWs of projects in South Africa; Eskom can self-produce electricity for ~US$0.02 per kilowatt-hour, and Eskom awarded renewable PPAs at ~$0.068 per kilowatt-hour in the last subsidy round, Bid Window 4, in June 2015. As context, global solar PPA pricing has collapsed to $0.015-$0.03 per kilowatt hour including including Scatec's winning $0.0244 per kilowatt-hour bid this July in financially distressed Tunisia.

If Eskom marks the legacy PPAs to current global solar PPA rates, these 190MWs and likely the 258MWs under-construction Upington solar project default on their debt as project-level EBITDA heads to zero. Should Eskom merely mark the legacy solar PPAs to Bid Window 4 levels of US$0.068 (over 2.0x current global solar PPA awards and Eskom self-generated electricity costs), then Scatec's 190MWs of operating assets still will not be able to service the project debt. Esplanade estimates that debt service coverage ratios would plummet from ~1.8X on a TTM basis to 0.4X.

Esplanade's point-of-view is further strengthened by the chaotic series of events that has plagued South Africa and Eskom since our March 2019 article. 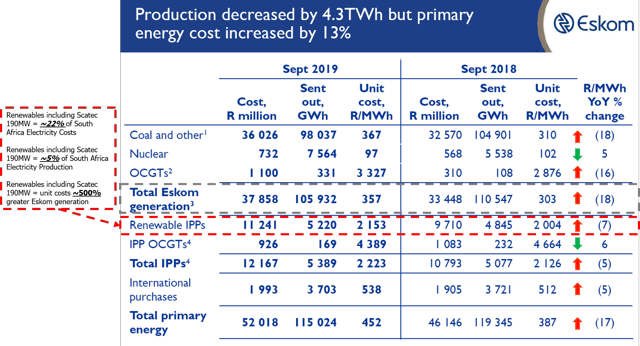 Egypt: Costs Up & Project Size Down

We previously highlighted that the Egyptian government put significant incremental cost on all developers in its signature 1,465MWs Benban solar park of which Scatec claimed 400MWs. Sell-side analysts and Seeking Alpha commenters pushed back sharply on our analysis by regurgitating management's talking points that incremental costs in Egypt, if any, should be considered immaterial (one sell-sider suggested a very specific US$5.6M figure). 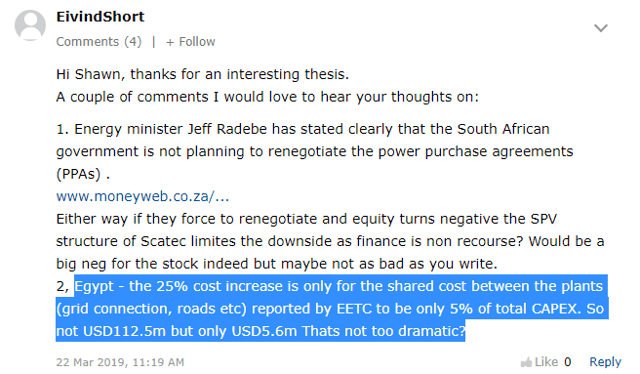 With Scatec's Egyptian assets now completed, we can objectively benchmark our critical claims. When signing their PPAs with the Egyptian government in April 2017, Scatec specified six (6) projects totaling 400MWs requiring total investments of US$450M. In fact, Scatec repeated these figures through their Q1 2019 filings.

However in their Q2 2019 filing, management quietly decreased the project size from 400MWs to 390MWs with almost zero attention paid by the sell-side. More telling, Mohamed Amer, Egypt Country Manager at Scatec, publicly declared that the company had invested US$500M in a November 24, 2019 interview, a US$50M increase from their public filings (10.0x what Scatec communicated to covering sell-side analysts).

Incorporating these material but largely ignored changes into our models, we estimate that Scatec's equity (levered) IRR on this massive project collapsed from ~19% to ~11.5% well below their stated 15% IRR targets (until Scatec discreetly lowered these targets in Q3 2019 as we detail later in this article). 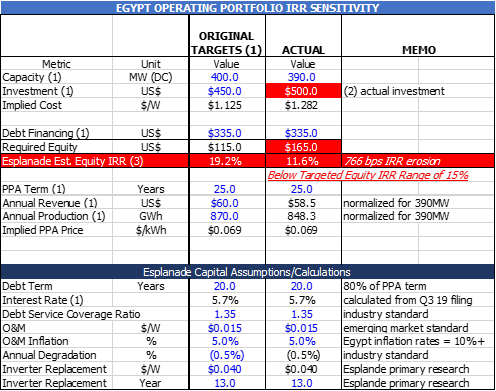 Vietnam: From "Extremely Important" Growth Market to Uneconomic Market in A Month

On the Q3 2019 earnings call on October 19, 2019, Scatec's CEO specifically called out that "Vietnam for us will be an extremely important growth market." A quick glance at Scatec's backlog and pipeline suggests that he was probably understating Vietnam's importance to Scatec. 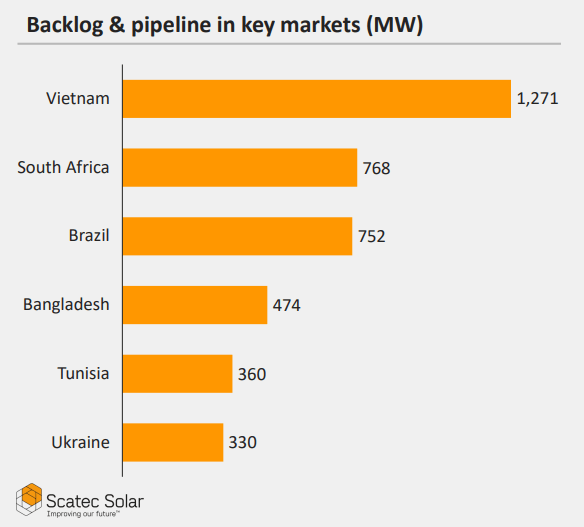 On November 22, 2019, Vietnam's Prime Minister announced that Vietnam is terminating its solar subsidies in favor of highly competitive auctions.

Vietnam surged to ~4,500MWs (6.0x its 2020 national target of 850MWs) of heavily subsidized solar deployments in 2019, and to mitigate that massive government financial liability (20-year duration for subsidies) and relieve electric grid congestion from the influx of solar, Vietnam precipitously ended its subsidies in favor of auctions. As reference, Scatec had expected feed-in tariff subsidy rates of $0.07-$0.075 per kilowatt hour as it executed on its massive pipeline through 2022. Recent auctions in neighboring (but immature solar market) Cambodia awarded solar PPAs at $0.038 per kilowatt-hour, and India consistently auctions solar capacity at $0.02-$0.04 per kilowatt-hour.

Based on the revised policy, Esplanade estimates that equity (levered) IRRs collapse from over 20% under subsidy scheme to about 0% under an auction mechanism. We question Scatec's ability to deliver on its backlog and pipeline in Vietnam at even modest equity (levered) IRRs and consider Vietnam, the largest contributor to the company's 4,500MWs 2021 target, at considerable risk. 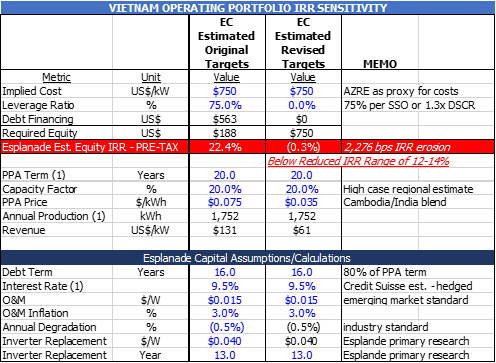 Given shares have rallied almost linearly to all-time highs, a logical investor might have expected Scatec to blow away consensus expectations, but Scatec has defied logic. Scatec's reported revenue and EBITDA have missed sell-side estimates in every quarter since we published raising questions about the economics of and forecastability of Scatec's supposedly stable and predictable business.

We also note that consensus expectations for 2019 and 2020 have declined materially since we published on March 15, 2019.

Since its IPO in 2014, Scatec has guided investors to 15% levered IRRs on its operating and future asset portfolio. In conversations with Scatec bulls, they almost always point to these mid-teens equity returns as unshakable and a given for all assets deployed by the company.

Well, in Q3 2019, Scatec discreetly lowered equity (levered) IRRs to 12-14% from 15% (since its 2014 IPO) for the operating portfolio and future additions to that portfolio. We illustrate above several instances where expected and future expected returns will fall well below the 15% hurdle rate (e.g., South Africa, Egypt, and Vietnam). 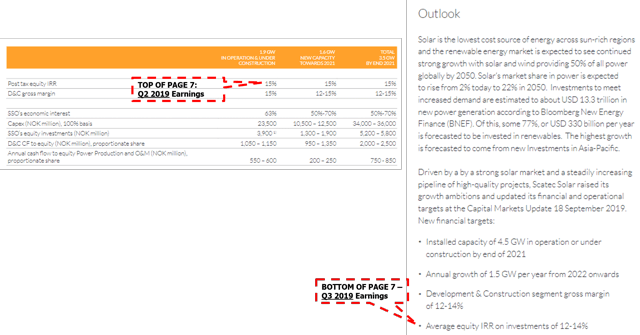 Though we think Scatec prudently lowered their IRR hurdle rate to 12-14%, we don't think they lowered it enough based on our estimate of expected returns in Vietnam and other geographies such as Ukraine, Honduras, Argentina, and Bangladesh (detailed below).

While we suspect the investor relations team simply neglected to include 50MWs of backlog projects in its October 2019 Investor Presentation, we think a potential 17% overstatement of project backlog worthy of mention.

We invite readers to tally up the MWs in the "Project backlog" table below for themselves. Scatec calculates 336MWs versus our 286MWs. 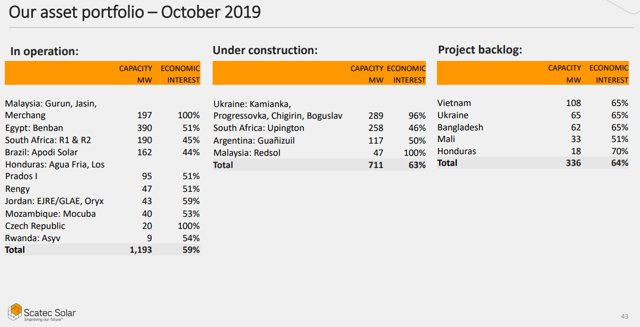 Other Nuggets: Death by A Thousand (Subsidy) Cuts 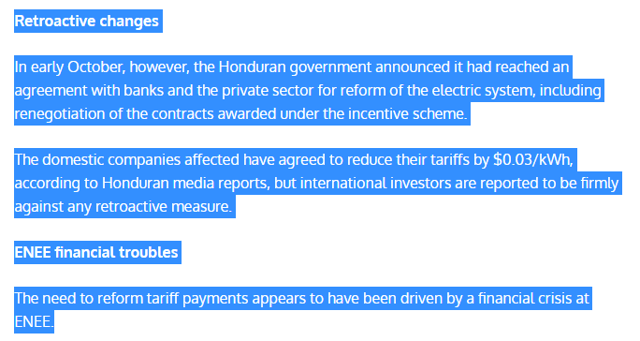 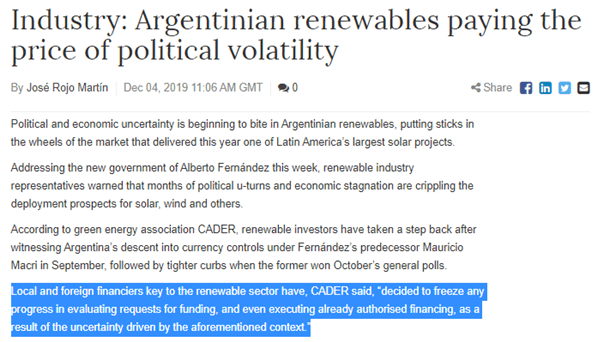 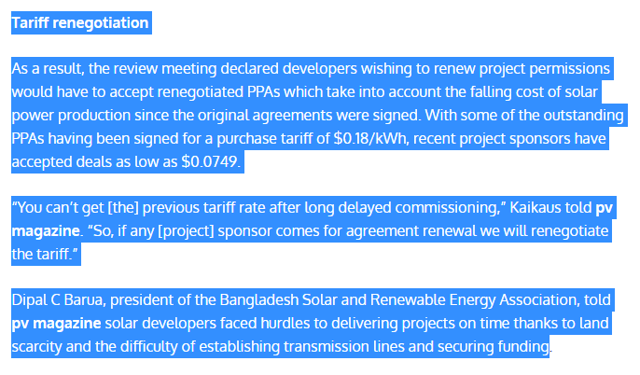 Scatec remains difficult to value. In addition to the risk factors detailed above, Scatec also suffers from complicated financials due to its controlling and non-controlling stakes in projects combined with its intra-company transfers. As one example from Q3 2019, Scatec reported consolidated net debt of NOK9,678M versus proportionate net debt of NOK6,091M, and consensus estimates represent a convoluted mish-mash of consolidated and proportionate figures.

Though we consider Scatec handsomely valued at 15.0X 2019E EBITDA and a token 0.9% dividend yield, we direct our concerns toward its ability to achieve aggressive EBITDA forecasts whether consolidated or proportionate. Unquestioning bullish sell-side analysts forecast ~70% EBITDA growth in 2020 despite Scatec continually missing their estimates, and trading at ~5.5X 2019E book value, the market values Scatec's pipeline at many multiples of its operating portfolio. We obviously hold a different perspective.

In our March 2019 article, we suggested that Scatec was worth NOK35 to NOK54 representing 47% to 66% downside from current levels:

Today with 25% more consolidated debt, 10% more shares outstanding, and materially more project return and policy risk, we believe the valuation range of Scatec should be reset even lower. 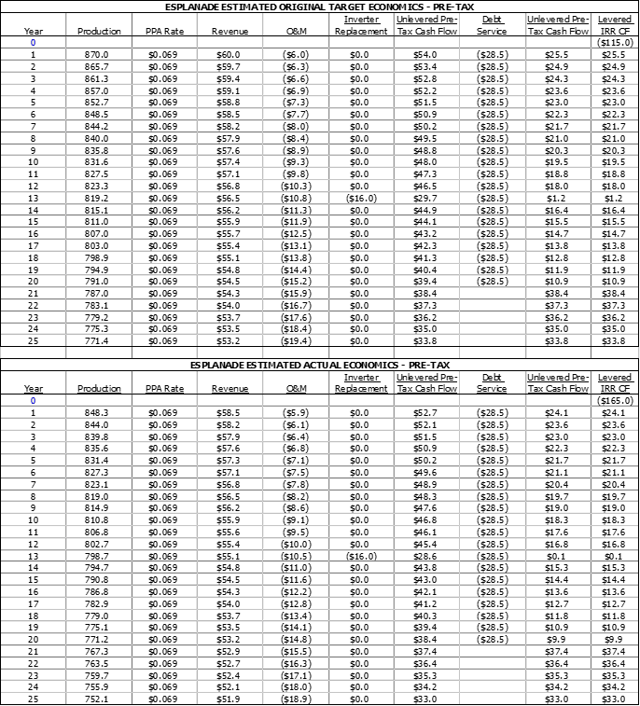 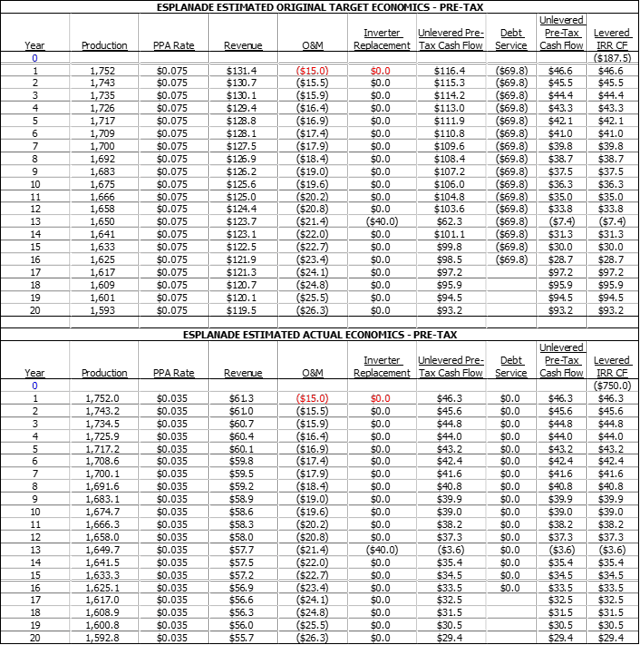 Shawn Kravetz
167 Followers
Shawn W. Kravetz is President of Esplanade Capital LLC, a Boston-based investment management company. Esplanade Capital was founded to manage capital for a small number of like-minded families, private investors, and institutions. The firm manages two private investment partnerships: Esplanade Capital Partners I LLC and Esplanade Capital Electron Partners LP. Esplanade Capital is focused on a handful of sectors, including: retail, consumer products, casino gaming, business services, education, and solar power. Prior to founding Esplanade Capital, Mr. Kravetz was a Principal at The Parthenon Group, a leading strategy consulting boutique, where he advised chief executives on corporate strategy. Prior to Parthenon, Mr. Kravetz was Director of Strategic Planning and Corporate Development at The CML Group, where he oversaw activities at subsidiaries including NordicTrack, The Nature Company, and Smith & Hawken. Mr. Kravetz received an MBA with High Distinction from Harvard Business School, where he was named a Baker Scholar. Mr. Kravetz received an A.B. in Economics from Harvard University, magna cum laude.
Follow

Disclosure: I am/we are short STECF. I wrote this article myself, and it expresses my own opinions. I am not receiving compensation for it. I have no business relationship with any company whose stock is mentioned in this article.