Why is there never a headline that says "Government program ends as its intended goal has been achieved"?"- Oleg Atbashian

Today, we look at an oncology concern from across the pond. The company recently came public, and like so many IPOs in the biotech sector these days, its IPO soon became 'busted' and is down since it made its debut on the market. However, it has some 'shots on goal' and merited further investigation.

Autolus Therapeutics plc (NASDAQ:AUTL) is a London-based, early-stage biopharmaceutical concern focused on the treatment of cancer through its proprietary redirected T cell therapies. The company has four assets in the clinic for four hematological indications and one solid tumor program. It was founded in 2014 and went public in June 2018, raising net proceeds of $156.5 million at $17.00 per American Depository Share (ADS). Once a high-flyer briefly trading over $50 in November 2018, the ADSs currently trade near $16 and command a market cap of slightly over $700 million. 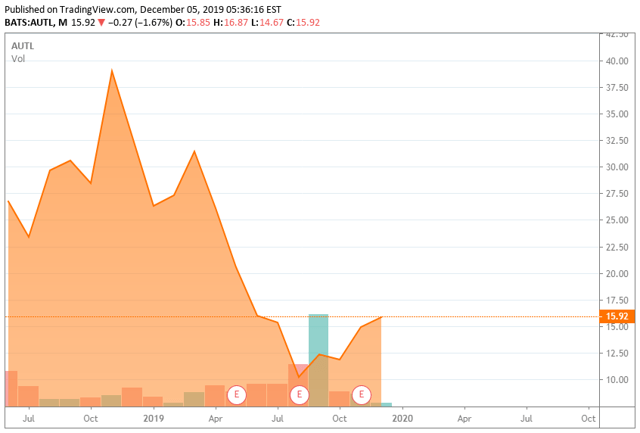 Cancers thrive on their ability to fend off T cells by evading recognition and by establishing other defense mechanisms, such as checkpoint inhibition and a hostile tumor microenvironment. Autolus is leveraging its expertise in T cells to not only reprogram them to overcome those defense mechanisms and attack a specific cancer type but also improve upon the efficacy and/or safety of other currently approved T cell therapies. At present, the company has four ongoing Phase 1/2 trials. 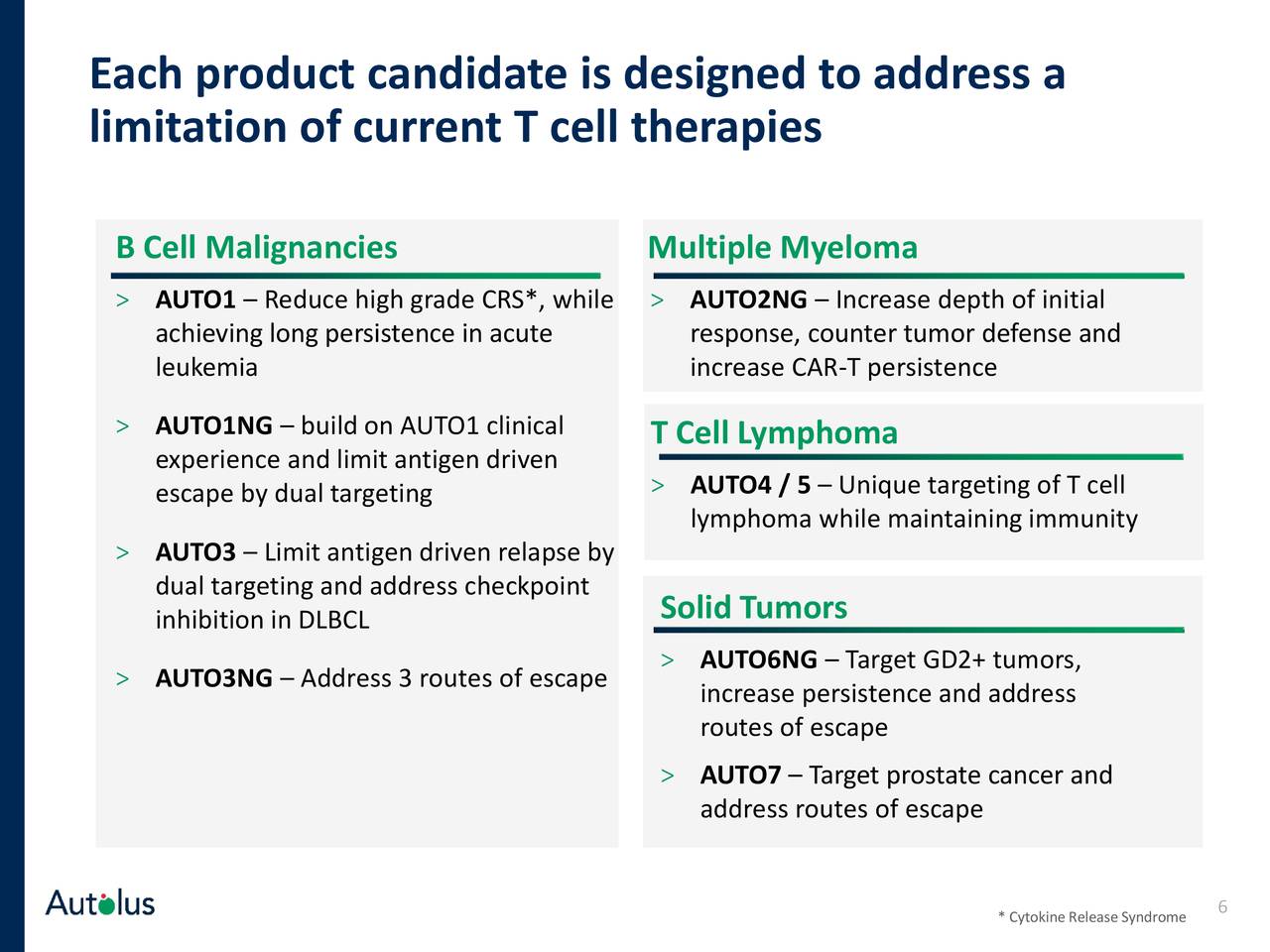 AUTO1. Two interim data readouts have already crossed the tape for AUTO1, which targets B-lymphocyte antigen CD19 and is designed to improve the safety profile of the CD19 binder while maintaining its anti-leukemia efficacy. It is being evaluated in two indications: pediatric (p) and adult (a) Acute Lymphoblastic Leukemia (ALL). Current CD19 CAR Ts use a high affinity CD19 binder, which has a fast on-rate and a slow off-rate, leading to overactivation, usually resulting in high-grade Cytokine Release Syndrome (CRS) and/or neurotoxicity. AUTO1 has a fast off-rate binder - 9.8 second half-life compared to Novartis AG's (NVS) Kymriah's 21 minutes - designed to improve the safety of programmed T cells. This design should bode well for aALL patients who, owing to the high tumor burden in their bone marrow, are more susceptible to CRS. 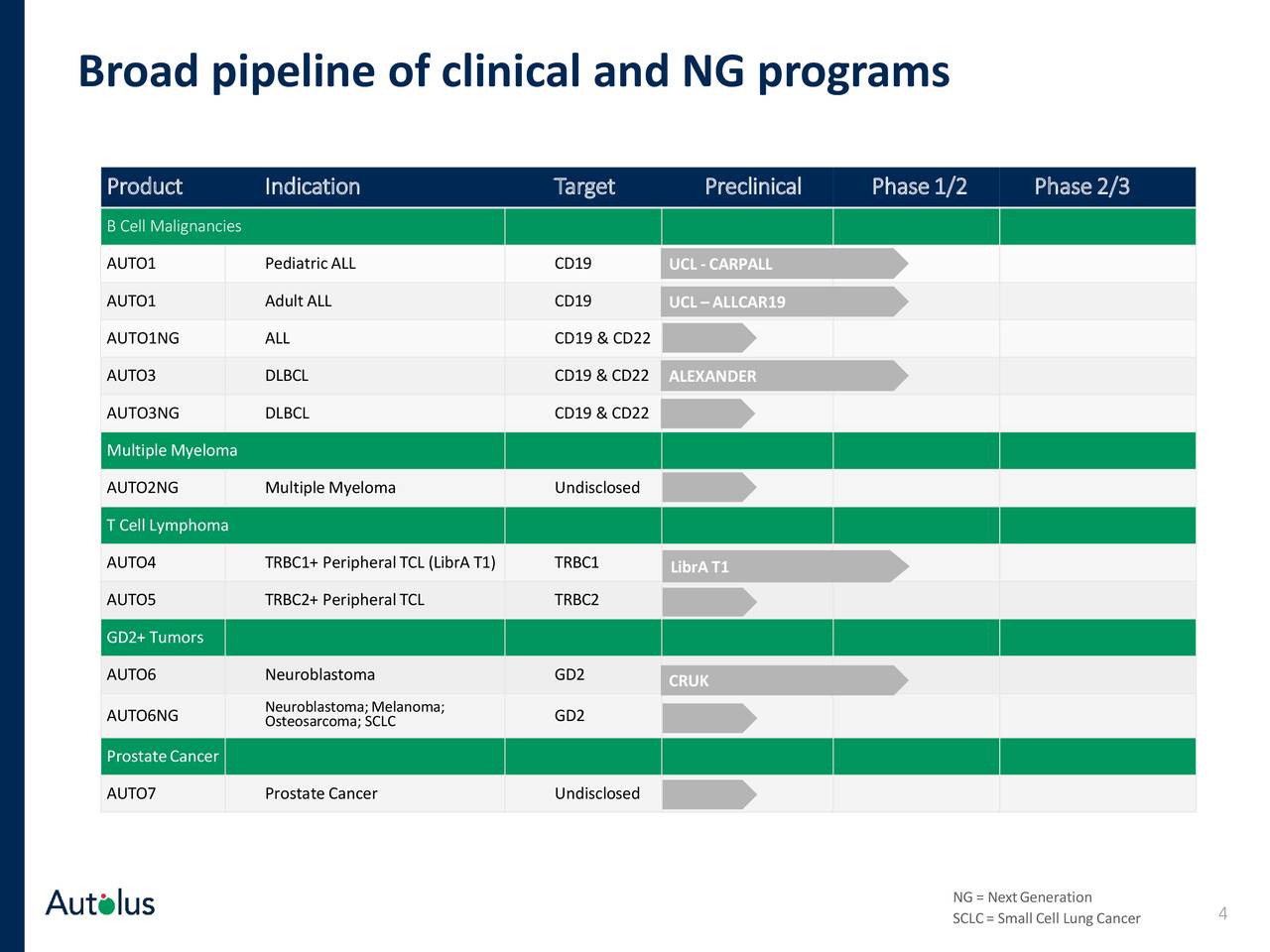 In an ongoing ten-patient Phase 1 study for aALL - five of whom are deemed 'high risk' for CRS - AUTO1 has so far demonstrated solid CAR T cell expansion and persistence with 8 of 9 evaluable patients achieving molecular complete response (CR) at 1 month. No Grade 3 or worse CRS was observed and only one Grade 3 neurotoxicity was experienced, which was quickly and completely resolved. Although admittedly a small sample size, these results compared favorably with Amgen's (AMGN) Blincyto's CR rate of 42%. More data is expected in 4Q19 with a Phase 2 registration trial expected to initiate by YE19. If that goes well, management is targeting a BLA filing in 2H21. 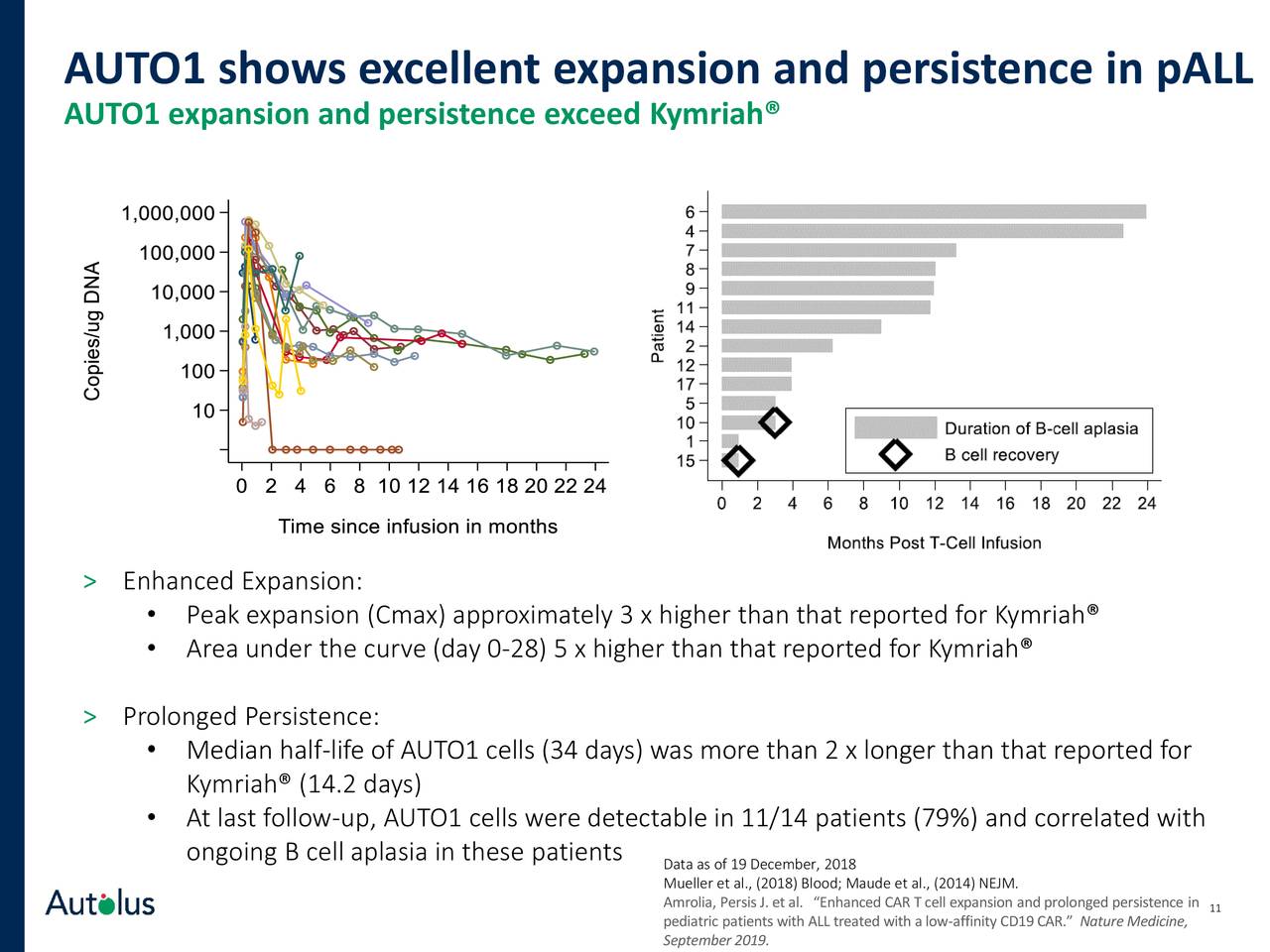 In an ongoing 14-patient Phase 1 study evaluating relapsed/refractory (R/R) pALL patients, 86% (12/14) achieved CR with a single dose of AUTO1. Five patients subsequently relapsed with CD19 negative disease. Overall survival was 84% and 63% at six and twelve months, respectively. Five of the fourteen patients remain in CR. Also, no Grade 3 or worse CRS was observed, while one patient experienced Grade 4 neurotoxicity. These results were slightly better than Kymriah for efficacy (81%) and significantly superior for safety as 47% of Kymriah patients experienced Grade 3 CRS or worse in the clinic. Updated Phase 1 data is expected at ASH in 4Q19.

Despite these strong small sample sized results, owing to the fact that both Kymriah and Blincyto are already approved for R/R pALL, the next step will be another Phase 1 study, this time featuring AUTO1 plus a novel CD22 CAR, known as AUTO1 next generation (AUTO1NG). That trial will initiate in 2H20 with interim data expected in 1H21. 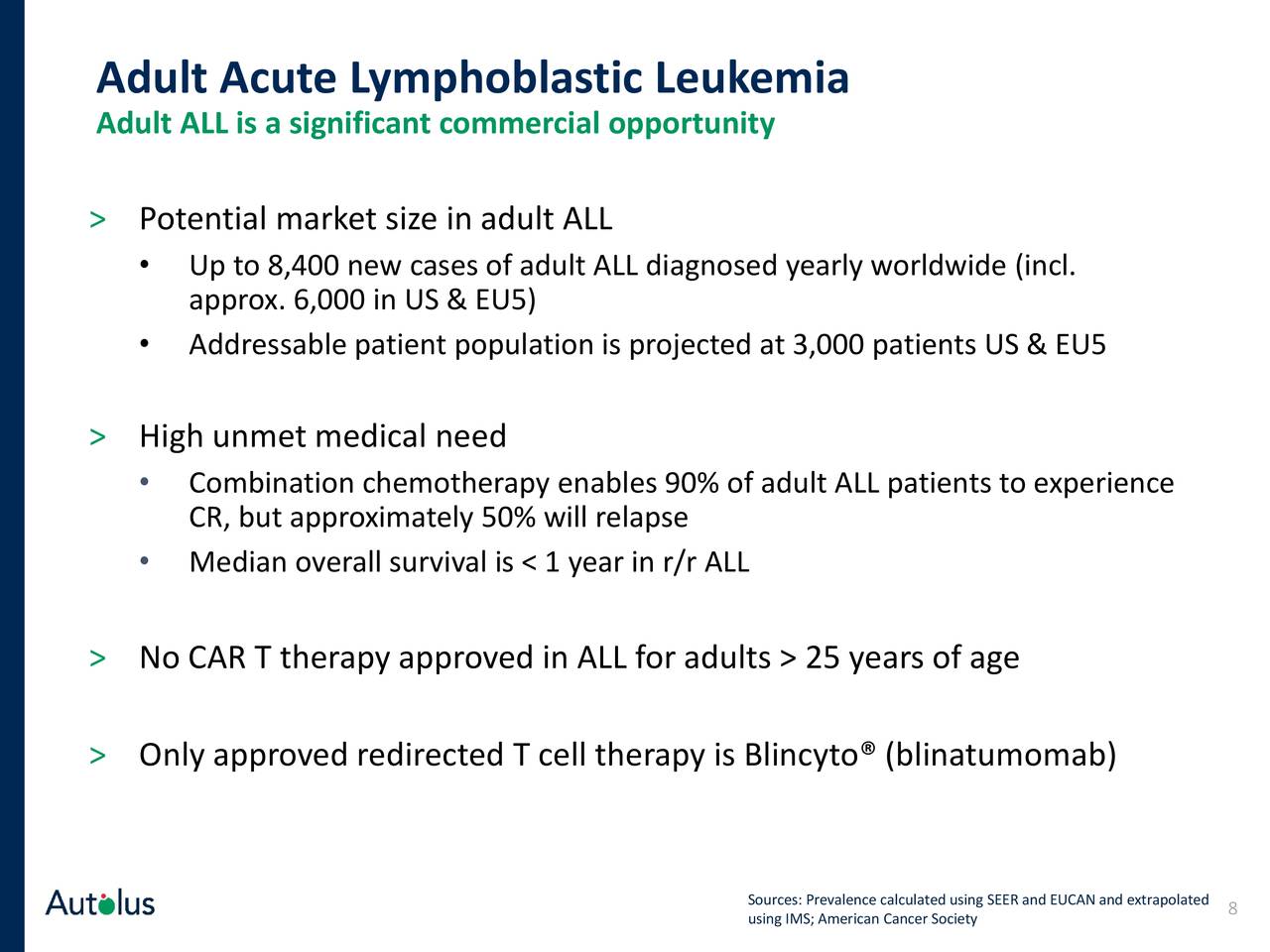 Unlike pALL, there are currently no approved therapies for aALL for patients greater than 25 years old. It is currently treated with combination chemotherapy, which induces a CR ~90% of the time, but ~50% eventually relapse, at which point, the median overall survival rate is less than a year. If successful, AUTO1 would enter a market where ~8,400 new cases of aALL are diagnosed globally, with ~6,000 in the U.S. and EU5, giving Autolus a total addressable market of ~3,000 patients.

AUTO3. Another compound that was studied by Autolus for ALL was AUTO3, which dually targets CD19 and CD22 antigens. It was found to be inferior to AUTO1 but gave the company direction to pursue AUTO1NG in the treatment of pALL.

AUTO3 is now being studied in the treatment of R/R diffuse large B-cell lymphoma (DLBCL). Specifically, it is being evaluated in a ~105-patient Phase 1/2 study that initiated in 3Q17. The ~24-patient Phase 1 dose escalation portion is assessing three doses of AUTO3, administered three to four days after chemotherapy and two weeks prior to anti-PD1 therapy (except in three patients). Of the seven evaluable patients as of February 2019, two had ongoing CRs at month 3 and month 6. Interim data is expected in 4Q19 with Phase 2 expected to begin enrollment in mid-2020.

If successful, AUTO3 would enter a DLBCL market that sadly has 24,000 Americans diagnosed every year with this most common form of non-Hodgkin's lymphoma (NHL). It is currently treated with a heavy regimen of chemotherapy and monoclonal antibodies. Both Gilead's (GILD) Yescarta and Kymriah are approved for this indication, sporting 39% and 29% ongoing CR rates, respectively.

AUTO4. In addition to its B cell malignancy candidates, Autolus has developed AUTO4 and AUTO5 to target T cell lymphomas. AUTO5 is expected to enter the clinic in 2H20. AUTO4 is further along, being evaluated as a second-line therapy in the treatment of TRBC1-positive T cell lymphoma, a rare and heterogeneous form of NHL, in a Phase 1/2 trial that initiated in 4Q18. TRBC1 and TRBC2 are proteins expressed on the surface of lymphoma cells. AUTO4's binder allows it to target TRBC1-positive T cell lymphoma cells without affecting healthy TRBC2-positive T cells. (AUTO5 does the opposite.) AUTO4 is also equipped with a RQR8 safety switch that can trigger programmed T cell death in the event of severe adverse events through the administration of Roche's (OTCQX:RHHBY) Rituxan. These two characteristics of AUTO4 should avoid the severe immunosuppression associated with standard-of-care chemotherapy treatments. Interim data from the Phase 1 portion of the trial is expected in 2H20.

AUTO6. Autolus' fourth clinical asset is AUTO6, a directed T cell therapy that targets glycosphingolipid GD2 and also features the RQR8 safety switch. It has been evaluated in the treatment of neuroblastoma, a cancer that develops from immature nerve cells in various parts of the body. The Phase 1 study was conducted by Cancer Research UK in conjunction with University College of London. The results of the trial directed Autolus to develop a next generation version, called AUTO6NG, that should enter the clinic for the treatment of solid tumors in 2H20.

The company recently entered an agreement with Tokyo-based Noile-Immune Biotech for rights to develop CAR T therapies using Noile's PRIME (proliferation-inducing and migration-enhancing) technology secreting both IL-7 and CCL19. This move was made to improve proliferation and trafficking into solid tumors of both engineered CAR T cells and patients' own T cells. This deal involves an unknown but likely small upfront payment plus milestones and royalties on any commercialize sales using this technology.

It should be noted that despite being licensed in March 2019, the company's clinical trial manufacturing site did not receive its overall qualification for another five months, which negatively impacted the cadence of patient recruitment for some of its trials, especially AUTO3, the Phase 1 portion of which was expected to complete in 1H19 (versus interim data now expected in 4Q19); and AUTO6NG, of which the first Phase 1/2 trial has been delayed by a year. The company's own facility in Maryland will be handling commercial supply.

Part of Autolus' steep decline over the past year is a function of redemptions at one of its largest institutional shareholders. Neil Woodford, who in the past was described as the UK's equivalent of David Tepper, had seen massive redemptions at his funds owing to their serial underperformance. As a result, assets under management at his equity income fund plummeted from ~$13 billion to ~$5 billion before he froze any more redemptions in June 2019. In thinly traded issues such as Autolus, these forced sales can have a significantly negative impact on share price. Through his funds, Woodford owned a significant stake (27% as of September 2018) in Autolus. According to Whale Wisdom, Woodford had sold ~3 million shares through August 2019, a significant amount in a stock that trades under 100,000 shares on a typical day. As the redemptions grew, so did the selling pressure, resulting in a share price decline from over $30 in April 2019 to under $10 in early September. The cathartic moment for the Autolus' stock came on September 5, 2019, when 7.8 million ADSs exchanged hands, likely signaling the end of the Woodford overhang.

To finance all its early clinical activity, the company has $229.4 million in cash and no debt on its balance sheet as of the end of the third quarter. In addition to its IPO, the company raised net proceeds of $108.8 million at $24 an ADS in April 2019, as the rash of redemptions hit Woodford. Its current cash position gives it a runway into 2H21.

Street analysts seem rather sanguine on Autolus' prospects with four buys outpointing one hold rating. Their median twelve-month price target is $25 per share.

With the overhang gone and plenty of very early shots on goals in one of the hottest areas of the biotech market, Autolus is an interesting short-term trading idea or possible 'watch item' stock. The company is way too early stage for consideration for a large holding. I also think there could be a headwind to UK-based firms until Brexit gets resolved.

That said, I offer up this research for those that might want to take a very small speculative position in this name. No options are currently available on AUTL, which rules out a buy-write option strategy which is how I would speculate in this name if available. Instead, I recently bought a few hundred shares so I can keep 'tabs' on this intriguing oncology name.

December Sale! Looking for 'hidden gems' from the under followed 'Busted IPO' space? Our model portfolio has tripled the return of the Russell 2000 since its launch in the summer of 2017 (as of 11/29/2019). Sign up for a free 14-day trial into The Busted IPO Forum and also get 20% off your first year of membership. To initiate your risk-free two week offer, just click here.

Disclosure: I am/we are long AUTL. I wrote this article myself, and it expresses my own opinions. I am not receiving compensation for it (other than from Seeking Alpha). I have no business relationship with any company whose stock is mentioned in this article.