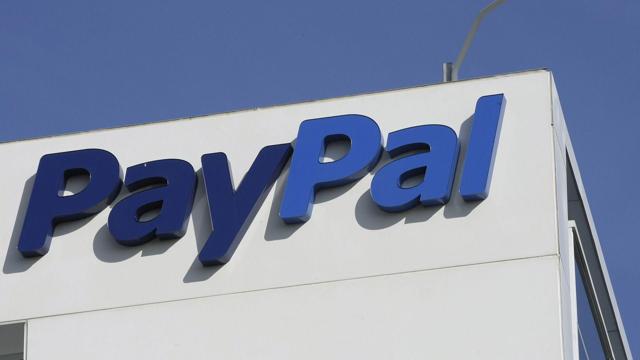 Almost since PayPal's (NASDAQ:PYPL) IPO, the company's stock price has been following its long-term exponential trend, which is pretty typical of a big public company: 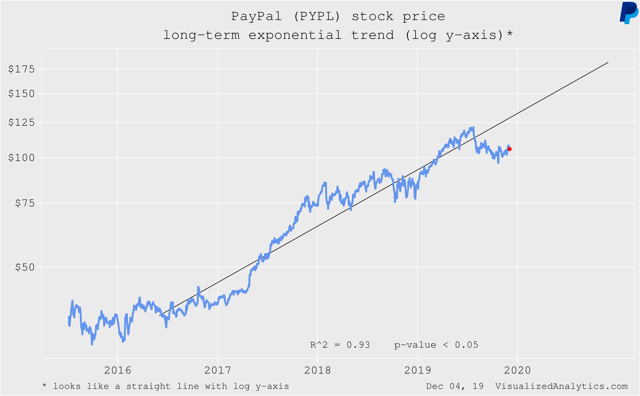 Now the actual price of PayPal's shares is more than two standard deviations below the level of this trend. And I think it's already too much: 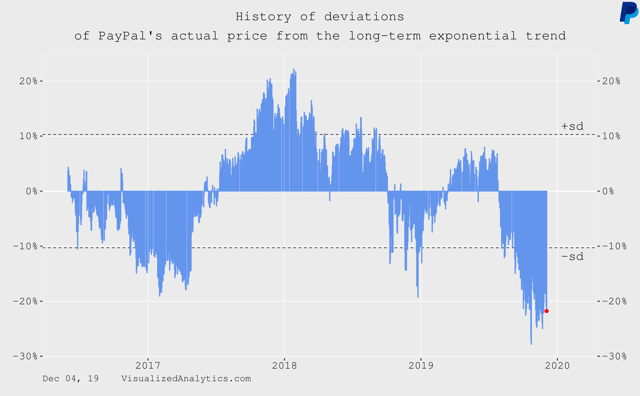 Throughout the last months, the rolling annual total price return of PayPal's stock has been fluctuating around the lower border of the standard deviation. It's also typical when reaching the bottom: 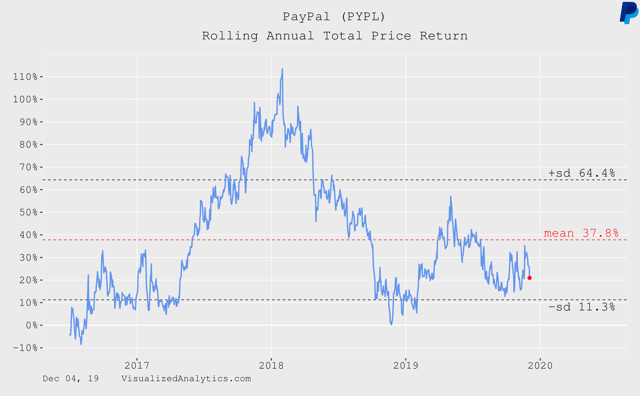 In the context of investment attractiveness, I like PayPal because the payments market as a whole and the mobile payments market in particular are influenced by the network effect. It means, that each new active PayPal account adds value to PayPal in the eyes of the clients not using the company's services. In other words, the more of your friends use PayPal, the more likely, sooner or later, you also will have a PayPal account. This is confirmed by the fact that the growth rate of PayPal user base tends to accelerate: 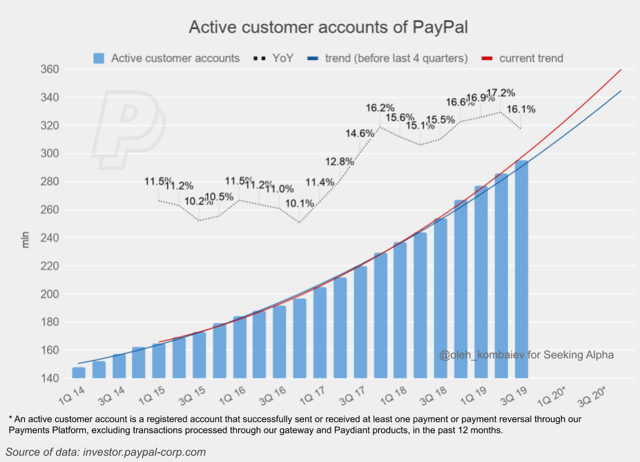 The number of payment transactions is also growing steadily: 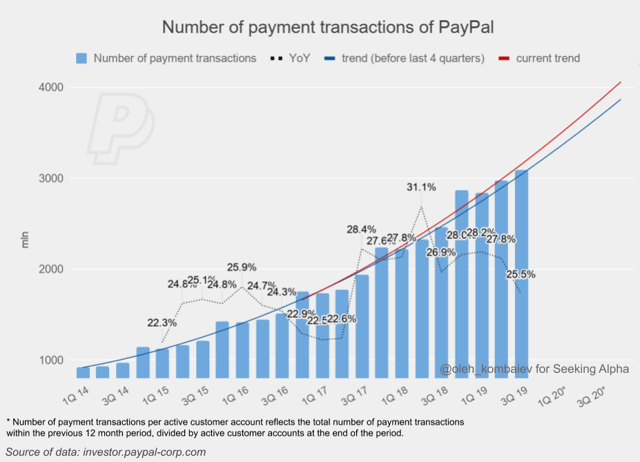 In my opinion, the stable growth of the client base is a necessary, fundamental requirement for business development, as well as for the growth of its capitalization.

Going further, over the last five years, PayPal's capitalization has been in a qualitative linear relationship with its absolute revenue TTM: 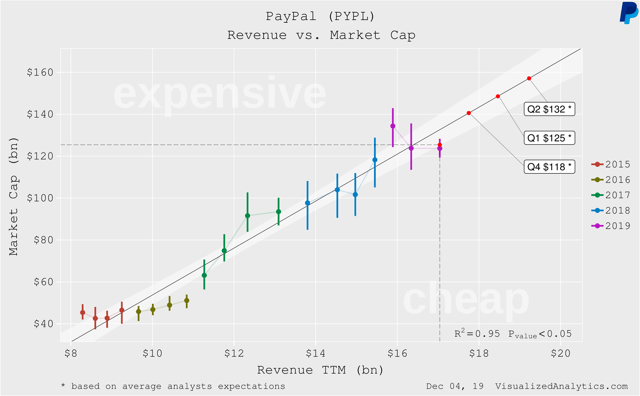 As you can see, this relationship identifies PayPal's current capitalization as undervalued. Moreover, according to analysts' average expectations, in Q2 '20 PayPal's revenue TTM will be around $19 billion, and in my model, this means that the company's rational capitalization will come close to $160 billion.

The relationship between PayPal's absolute EBITDA TTM and capitalization also indicates an undervalued state of the company: 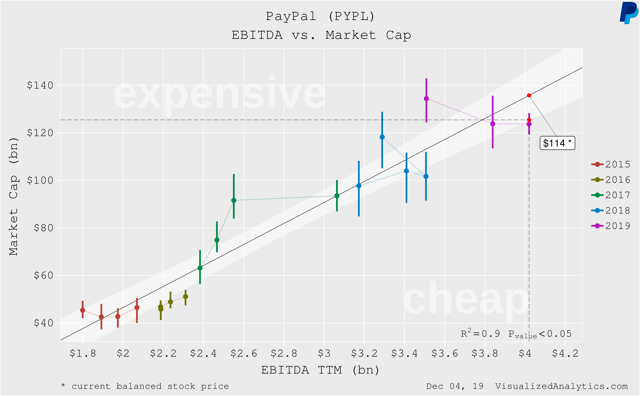 In Q3, PayPal's revenue TTM grew by 13.82% YoY, which was the second lowest result in the entire history of the company. But, according to the average estimates the revenue growth rate is expected to accelerate. This will improve the situation. 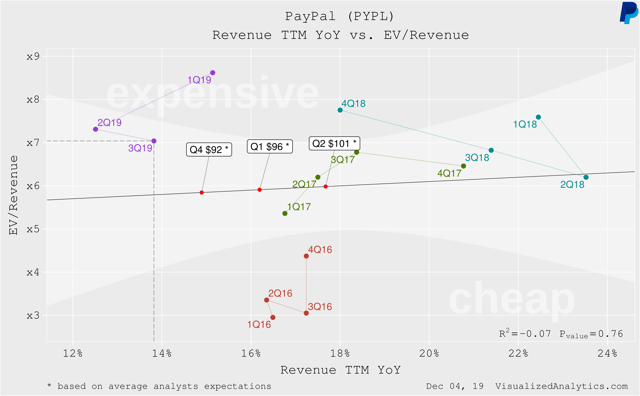 In the long term, companies often demonstrate a strong direct relationship between return on invested capital (ROIC) and the EV/IC multiple. We can find an example of such a relationship in the case of PayPal. In this case, all other things being equal, PayPal's stock price should increase by 27% so that the balanced state can be achieved. 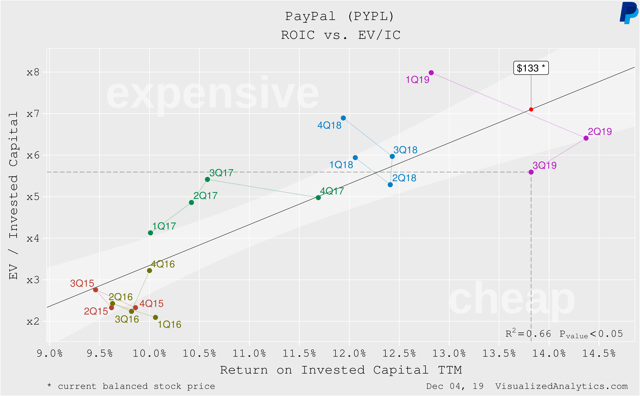 Within the bounds of the described relationships, one can't say that PayPal is overvalued now.

The comparable valuation based on the P/S (forward) to growth multiple has shown that PayPal is not expensive at all. And by the way, much cheaper than Visa (V) and Mastercard (MA): 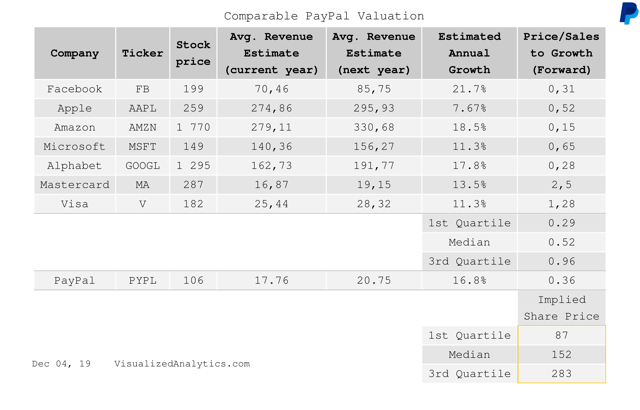 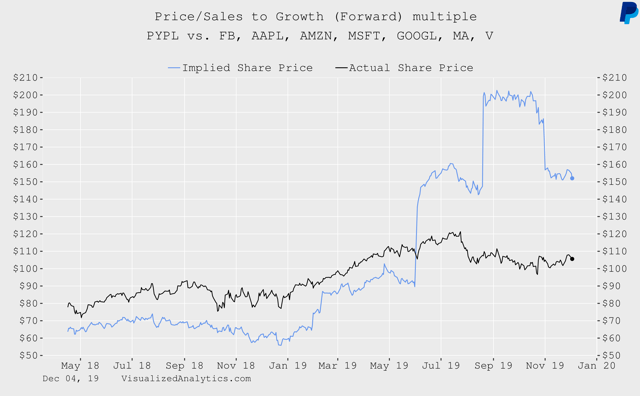 But, judging by the P/E (forward) multiple adjusted by the expected EPS annual growth rate, the stock price is now 43% lower than the balanced level: 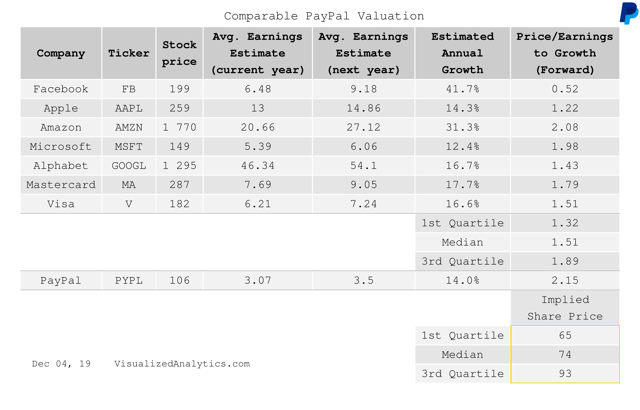 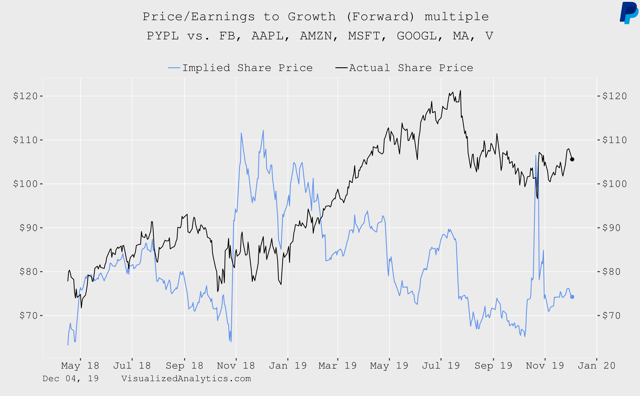 I think PayPal is a typical growth company. And the market is more inclined to evaluate such companies through multiples based on revenue parameters. And therefore, I am more inclined to believe that PayPal is now cheaper than the main blue chips in Nasdaq. 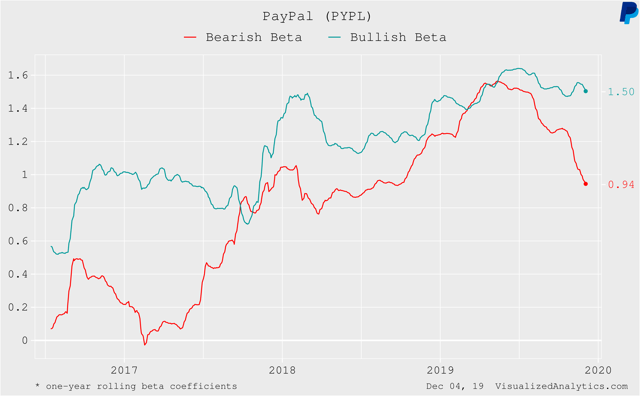 This means that the bullish sentiment about PayPal is growing.

Speaking globally, it is very likely that the digital payments market is only at the beginning of its growth due to the inertia of human habits. And therefore PayPal's accelerated development phase is definitely not over.

Also, I think that the recent correction wave was useful for PayPal because the company's multiples became attractive again.

So, I think that PayPal is now very close to the bottom.

Oleh Kombaiev
15.1K Followers
Individual investor, data and financial analyst. I am interested in investment decisions based on objective methods of modeling and statistical analysis. Besides, I pay much attention to the psychological aspects of decision making.
Follow

Additional disclosure: I don't have a trade position regarding PayPal. And I believe that to be an advantage in terms of analysis because I am able to consider indicators impartially without subliminal motivation to see positive or negative sides even if they don't exist