This monthly series gives fundamental scores by sector for companies in the S&P 500 index (NYSEARCA:VOO, SPY, IVV). I follow chosen fundamental factors for every sector and compare them to a historical baseline, so as to create a synthetic dashboard with a value score (V-score) and a quality score (Q-score). You can find here data that may be useful in a top-down approach.

The choice of the valuation and quality ratios has been justified in previous articles. Among the simple, publicly available fundamental factors, they are the best predictors of future returns according to 17-year backtests. Median values are better reference data than averages for stock-picking. Each median is the middle point of a sector, which can be used to separate good and bad elements. A median is also less sensitive to outliers.

The next table reports the 4 valuation factors. There are 3 columns for each factor: the current median value, the historical average ("Avg") between January 1999 and October 2015 taken as an arbitrary reference of fair valuation, and the difference in percentage ("%Hist"). The first column "V-score" shows the value score as defined above.

The next table gives a score for each sector relative to its own historical average. Here, only one factor is accounted. 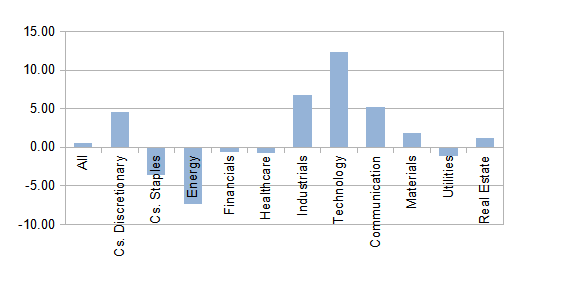 The next table and chart show the return in 1 month and 1 year for all sectors, represented by their respective SPDR ETFs (including dividends). 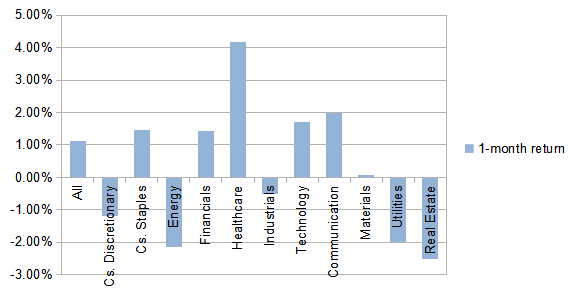 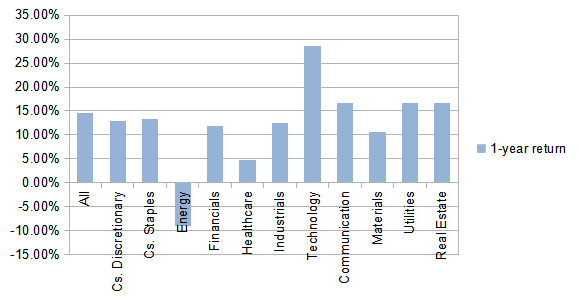 For median-based metrics, S&P 500 companies look overpriced by about 30%, with a ROE slightly above the historical average. The highest overvaluation since I started this series in 2015 was 39% just before the correction of February 2018.

According to these metrics, communication, and energy are underpriced by about 10% to 15%. Financials, healthcare, real estate, and consumer discretionary are overpriced by 10% to 20%; materials, industrials, technology by 20% to 30%; consumer staples by about 37%; utilities by 60%. Communication, technology, industrials, consumer discretionary are significantly above their historical averages in quality metric. Energy and consumer staples are below it. Combining these valuation and quality metrics, communication is the most attractive sector and utilities the worst one. It has been so for many months.

Most of my stock holdings are based on quantitative value models. However, value is a bad timing indicator. Quantitative Risk & Value (QRV) provides you with a more realistic quantitative approach, for a world of probabilities instead of just risk on/risk off. It includes a systemic risk indicator and strategies based on it. Get started with a two-week free trial and see how QRV can improve your investing decisions.

Fred Piard
14.26K Followers
Author of Quantitative Risk & Value
Data-driven model portfolios and market risk indicators.
Author of Quantitative Risk & Value and three books, I have been investing in systematic strategies since 2010. I have a PhD in computer science, an MSc in software engineering, an MSc in civil engineering and 30 years of professional experience in various sectors. My aim is making simple and efficient quantitative investing techniques available to my followers. Quantitative models can make investment decisions faster, reproducible and emotionless by focusing on relevant information in the middle of market noise. Moreover, models can be refined to meet specific risk tolerance and objectives.

I am an individual investor and an IT professional, not a finance professional. My writings are data analysis and opinions, not investment advice. They may contain inaccurate information, despite all the effort I put in them. Readers are responsible for all consequences of using information included in my work, and are encouraged to do their own research from various sources.