Despite reporting an unimpressive Q3 with widening losses and slowing growth, Carvana(NYSE:CVNA) has risen substantially by over 20% in less than a month. We believe that the current price increase has little to do with fundamentals but rather has more to do with sentiment, but we believe that the market will realize that CVNA's fundamentals aren't great in the long run and should adjust the valuation accordingly.

Carvana recently reported its Q3 results. While it did beat revenue estimates, it missed earnings slightly, losing over $92mil. Despite the strong revenue growth of over 100%, losses still managed to grow substantially by over 50%. After climbing for the past few quarters, both net loss margins and adjusted EBITDA margins declined.

Growth, especially in units sold, didn't go so well either. As you can see, there was a steep quarter decline in YOY unit growth in Q3 of over 12%, with growth declining from 95% to just 83%. This is the steepest decline in YOY growth quarterly in the last 7 quarters. Yes, a growth company like CVNA will see a continuous growth slowdown in the long run, but still a decline of this magnitude is quite concerning. 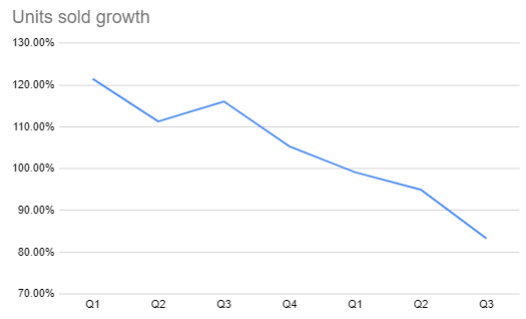 Total GPU also declined slightly from Q2 levels, mainly caused by retail and wholesale GPU declines. The decline in retail and wholesale GPU also caused other GPU as a % of total GPU to shoot past 50%. As we have mentioned in this article, the source of this "other GPU" is very suspect and varies a lot based on management assumptions and market conditions. The fact that other GPU now makes up such a high portion of total GPU makes CVNA's future much more uncertain.

One point management mentioned constantly was that they increased purchases from customers significantly this quarter. Management believes that by doing this they are cutting out the middleman and thus reducing costs.

Our offering of buying cars from customers was a standout this quarter, so I want to take a little extra time discussing it. The annual growth is remarkable figure, but I think the quarterly growth is even more telling. We grew cars bought from customers by 40% quarter-over-quarter. That is pretty exceptional and has unsurprisingly put some pressures on the business to quickly adapt. Those adaptations are well underway and include investments in several areas as well as additional preparations for another big growth year in 2020

However, it is quite odd that retail GPU levels are declining when management is sourcing more cars from customers, which are supposed to lower their COGS. Management had an explanation for that too below, but it really makes us doubt how much CVNA can increase profitability by buying cars from customers.

If we look sequentially those offsets included high wholesale prices in Q2 and the early part of Q3 followed by relatively high depreciation rates in the latter part of Q3 which definitely had an impact on our vehicle margin, moreover another sequential change was a reduction in delivery revenues on a per unit basis that came along with us scaling inventory on the Eastern half of the U.S. with our Indianapolis, Cleveland and Nashville IRCs coming online and so those are some of the offsets in sequential retail GPU.

It's also worth it to note that around 70% of units sold are now bought from customers, so even if CVNA buys substantially more units from customers the benefit is quite limited and will likely end in 1-2 quarters as CVNA continues ramping up this number. 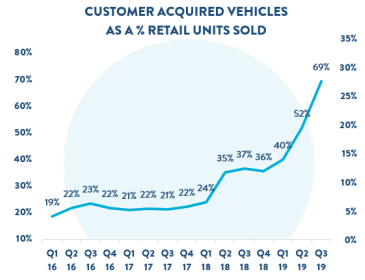 Dilution is also continuing at a rapid pace as CVNA tries to conserve cash. YOY shares outstanding are up 5%, which may not seem like much but it does add up after time. For example, if this rate of dilution continues after 5 years -which seems likely given widening losses, shares outstanding will be increased by over 25%. Also note that dilution will only get worse in the event of a market correction as more shares will need to be issued to employees.

Overall, the quarter was below expectations and the market agreed for a short period of time, punishing the stock by 10%. However, for some inexplicable reason, CVNA has risen over 20% since the results announcement on pretty much no news. We believe this is caused by FOMO, which is obviously unsustainable in the long run.

CVNA continues to trade at a pretty rich $14bil valuation - Note that insiders continue to own most of the units in the operating company, as this article describes, so while the outstanding share count is just 50mil, the actual share count is 150mil. Yes, it has ramped from over 8k cars per quarter to nearly 50k currently, not only is this just 25% of KMX's volume, but CVNA has also been losing tons of money and raising tons of debt while doing this.

It now has over $0.9bil in net debt, meaning EV is nearly $15bil for a company that has widening losses and operates in an increasing risky industry. Even the rating agencies understand how much trouble CVNA is in, rating the debt CCC. Only the stockholders haven't caught on yet, and when they will, as happened for a while in September, things will start falling apart.

The main risk surrounding our CVNA short thesis is that management does turn out to have a much better loan origination system than competitors, which we view as unlikely given most competitors have more data than CVNA. Another risk is that the macroeconomic expansion continues for a much longer time than expected, allowing CVNA to raise capital to survive for a much longer period than expected.

Overall, CVNA continues to be incredibly overvalued with poor fundamentals. However not the fundamentals driving the price currently, but rather the low float and overall bullish sentiment. Once fundamentals start to matter again, investors will likely sell off CVNA significantly.

Disclosure: I am/we are short CVNA. I wrote this article myself, and it expresses my own opinions. I am not receiving compensation for it (other than from Seeking Alpha). I have no business relationship with any company whose stock is mentioned in this article.

60 Comments
To ensure this doesn’t happen in the future, please enable Javascript and cookies in your browser.
Is this happening to you frequently? Please report it on our feedback forum.
If you have an ad-blocker enabled you may be blocked from proceeding. Please disable your ad-blocker and refresh.