Banks are finally rallying, but why do investors (or at least I) feel nervous? We have all-time highs for some banks even while the Fed is cutting rates and a trade war lingers. As shown below, for those who have patiently waited, you're finally being rewarded.

In this first of a multi-article series, I analyze where banks are likely to get their profits from in the short-to-medium term.

I'll also analyze where U.S. growth is coming from and how it's impacting the revenue of banks, such as Citigroup Inc. (C), JPMorgan Chase & Co. (JPM), and Bank of America Corporation (BAC).

Also, I review the risks and valuations of banks and how those valuations can mislead you.

I'm still bullish banks in the long term, but the economic forces have the potential to erode earnings and lead to a change in earnings forecasts for 2020.

Although I view any correction of 10% or more as an opportunity to buy, I'll review some key metrics for investors to keep an eye out for, so that you don't lose those hard-earned gains from your bank stock holdings.

The ongoing trade war between the U.S. and China has slowed economic growth. Business investment has contracted or slowed over the last few quarters as compared to 2018.

The Fed is cutting rates in hopes of preventing a recession and a negative growth quarter in 2020. Remember, the Fed acts based on the medium term, meaning six months or more. Mr. Powell has stated that the contraction in business investment is one of the key reasons for easing monetary policy for the first time since the Great Recession.

The bond market is rallying, meaning yields are falling as investors buy up bonds due to fear and uncertainty in the U.S. and the global economy.

Conversely, the consumer is doing great, and spending is strong.

The S&P 500 broke through all-time highs along with a best-of-breed bank, JPMorgan Chase & Co.

If you're confused as to why there are so many conflicting moves and signals in the markets, you're not alone.

Although higher bank stocks are a welcome sign, they're coming against an economic backdrop that does not match the market moves. It's possible that the market is currently priced to perfection.

P/E Ratios Are Not Enough

Despite the geopolitical risks and the Fed cutting rates to stave off a recession, bank stocks have fairly low valuations.

For review, the P/E ratio is a valuation metric that measures a stock's current share price relative to the company's earnings per share or EPS. EPS is merely net income divided by outstanding shares and helps investors compare earnings between companies when they have different outstanding share counts.

Since bank P/Es are attractive, one might jump into a stock based on a low PE with the premise that it must rise to the point of being fairly valued, right?

The answer is no; it doesn't. Just because a stock fits into a nice, neat financial analysis model, or spreadsheet, or the valuations ratios tell you it's a great buy, it doesn't mean the stock will go higher. It also doesn't mean that the earnings forecasts from the company and analysts will be realized.

The market isn't always efficient, meaning investors don't have all of the information about a company when bidding up its stock price.

Translation: Valuations and ratios aren't enough; we need to do research.

The Silent "E" in the PE is for "Economics"

I like to modify the P/E ratio to the PE+E ratio, which includes Earnings expectations as well as the Economics that are needed to drive the earnings.

In other words, it's important to determine what's driving the "E" in the PE for that particular company as well as the industry.

Who does the bank sell to?

It's important to match the customers that drive a bank's earnings to the economics. In other words, we need to determine if those customers – whether they're businesses or people – are doing well economically.

Why U.S. Growth Is Slowing

GDP growth or gross domestic product measures all of the goods and services produced in the United States. For the past two quarters, the U.S. has been growing at approximately 2% annualized (see graph below).

But 2% growth is solid, and we've been here before, so is it really a concern for bank stocks?

In the graph below, we can see that the U.S. economy has only two cylinders firing in its four-cylinder engine. 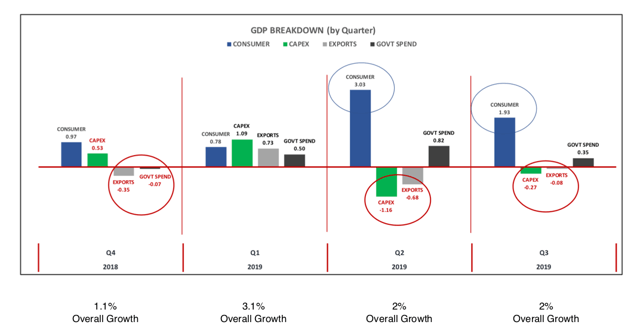 Data source: BEA. The graph and analysis by Chris B Murphy.

The overall U.S. growth rate is lower when we're not firing on all four cylinders. We can see evidence of that from Q1-19, which posted the best growth for the year at 3.1% when the economy saw growth in all four areas.

Bank Revenue Is Feeling It

At some point, the economy's issues hit the revenue numbers for banks.

If you recall, 2018 saw a significant amount of business investment and capital expenditures for companies.

Also, our GDP graph above showed that in 2018, three out of four quarters posted over 2% growth in the economy.

If we analyze the revenue growth since Q1 2019, the growth rates are far lower (see below).

None of the banks have posted even 1% growth in revenue since early March – let alone the double-digit growth that we saw from the year prior.

Of course, a few quarters of anemic growth isn't enough for long-term investors to bail out. However, it's something to watch to ensure that a trend doesn't develop in the next few quarters.

It's no coincidence that the contracting growth rates in business investment coincide with low revenue growth for 2019. This is why it's important for investors to protect themselves if they have enormous gains in these stocks, and they don't want to hold them through another economic slowdown.

I believe the economy is still performing fairly well, considering the geopolitical issues, but there are risks to growth that investors should be aware of in the coming months.

The risk, of course, is that if the trade war lingers on, it's unlikely that business investment will make a V-shaped recovery. In my opinion, company CEOs are not going to rush out and spend billions of dollars on CAPEX immediately following a trade war resolution.

Business investment is a 3 to 5-year capital commitment. I believe there has already been damage done to the economy – not enough for a recession – but damage nonetheless.

The market, on the other hand, is pricing in a V-shaped recovery in business investment and a continuation of a strong consumer thanks to the Fed rate cuts.

Also, there's the risk that consumer spending comes back down to normal levels, meaning 1% or 1.5% growth in each quarter. If that scenario occurs and given the negative growth rates on CAPEX and exports, it's likely we'll see overall GDP growth at 1.5% or less in the first half of 2020.

The market is euphoric that the Fed is cutting interest rates, which I believe is the wrong approach. The mere fact that the Fed is easing signals that several very intelligent economists expect lower growth in the future.

My concern is that with the trade war not yet resolved, we could see little growth over the next three to six months.

What's The Impact On Bank Stocks?

Commercial loan growth is at risk of slowing if business investment doesn't bounce back. Also, for banks that lend overseas, such as Citigroup, the slowing global economy hits loan demand as well.

Consumer spending is doing well, which should help banks. Also, if you've invested in a bank that has solid fee income, it can help you hedge against low yields. Bank of America Corporation, for example, gets 50% of its revenue from fee income and the other 50% from net interest income (the spread on the credit products).

It's okay to take some profits here at these levels. Some investors may want to take some money off the table because you can't hold the stock through a potential slowdown. It's okay to sell some shares or employ risk management measures to protect your gains.

My Take: Banks are well-capitalized, they're buying back shares, and the economy is still strong overall. But, until we see the economy firing on all four cylinders, and the trade war resolved (or a truce), we could see a 10% correction in bank stocks in the short-to-medium term.

However, for long-term investors, any correction should be a buying opportunity because banks should do well on the other side of any type of economic slowdown.

What to Watch and Suggestions:

My future articles will analyze how the current environment is impacting yields, loan growth, and profits for banks.

Good luck out there.

To have the next article emailed to you, click the "Follow" button and check "Get email alerts."