On Wednesday, October 30, 2019, liquefied natural gas carrier partnership GasLog Partners LP (NYSE:GLOP) announced its third-quarter 2019 earnings results. At first glance, these results appeared to be rather disappointing as the company posted a year-over-year revenue decline, but still managed to boast a very slight earnings beat, and also failed to match the earnings expectations that its analysts set for it. A closer look at the firm's results though reveals that it had a very strong quarter and managed to correct a few of the problems that we saw in the first half of the year, which was somewhat expected. The company is one of our recommended investments here and we do continue to see our thesis play out in these results. 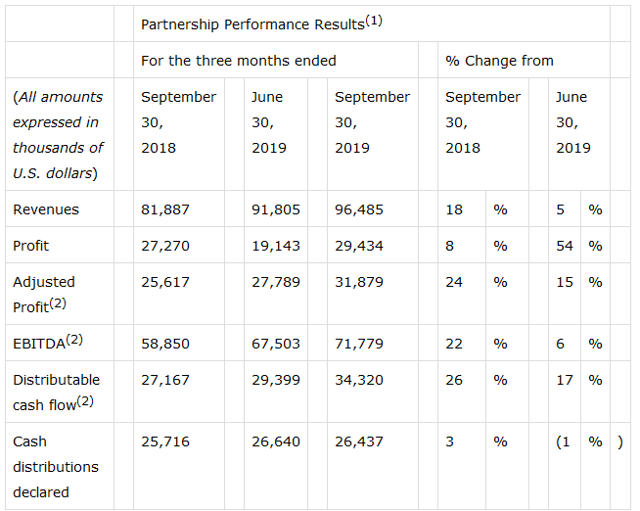 One of the biggest reasons for the improvement here is the dropdown of the GasLog Glasgow, which is something that I discussed in my analysis of the partnership's second-quarter 2019 earnings results. As this vessel was acquired on April 1, 2019, it could not have contributed to the company's year-ago results. It is much the same story with the Methane Becki Anne, which the partnership acquired on November 14, 2018. As this vessel was acquired after the close of the third quarter of 2018, it could not have generated any revenues for the company during that period.

One thing that we do clearly see though is that both of these vessels were operating for the entire second quarter yet the company also saw its revenues on a partnership performance basis increase quarter-over-quarter. GasLog Partners did not purchase any new vessels during the second quarter so we cannot credit fleet expansion for this improvement. What we can credit though is the GasLog Shanghai starting work on its current long-term contract back in June. This contract replaced the spot pool trading that was the vessel's previous revenue source, and as we have discussed before, the spot market can be a rather volatile way to make money due to prices being in constant flux. This long-term contract has proven to be a much more reliable source of revenue and GasLog credits it for being the primary cause of the $4.7 million quarter-over-quarter increase that it produced from its fleet. This also fits in line with some of the predictions that we made for this company last quarter.

One of the most appealing things about GasLog Partners is its business model of securing and maintaining long-term charters for the vessels in its fleet. In fact, the company will not even purchase a vessel from GasLog (GLOG) unless it manages to secure a long-term charter first. The reason why this is appealing is that this should result in a relatively stable revenue and ultimately cash flow base from which the company can pays its distributions. Unfortunately though, this is something that the company did fail to do in a few recent quarters and indeed the partnership did have a few vessels that were trading in the spot market. As just mentioned, the GasLog Shanghai started work on a new contract with Gunvor back in June. This new charter has resulted in the company having all of its vessels under long-term contracts: 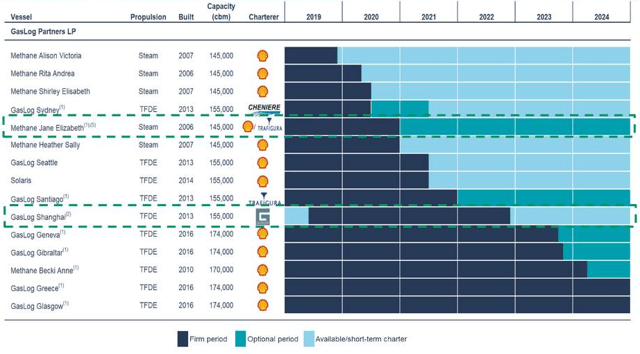 This should ensure the company relatively solid revenues over at least the next month or two. However, as we can clearly see, the Methane Alison Victoria is scheduled to come off of its current charter before the end of 2019 and it does not have a new contract to start on and will be forced to accept whatever it can get in the spot market. We also have the Methane Rita Andrea and Methane Shirley Elisabeth running into the same problem by the middle of 2020. Fortunately, for the next few months, the spot market should be at its seasonally high levels, so this should not be horrible for the company, but it is still a problem that the company will need to deal with relatively quickly.

Unfortunately, GasLog Partners did not directly discuss its efforts to resolve this problem in its results. In fact, it did not even state that management knows that it has a problem here. However, there are reasons to believe that the company will be able to secure new long-term work for these vessels. This confidence comes from the strength in the liquefied natural gas tanker market. As we can see here, global demand for LNG imports showed 14% year-over-year growth in the trailing twelve-month period: 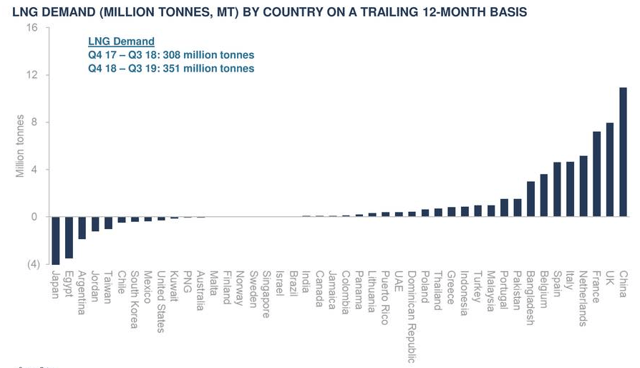 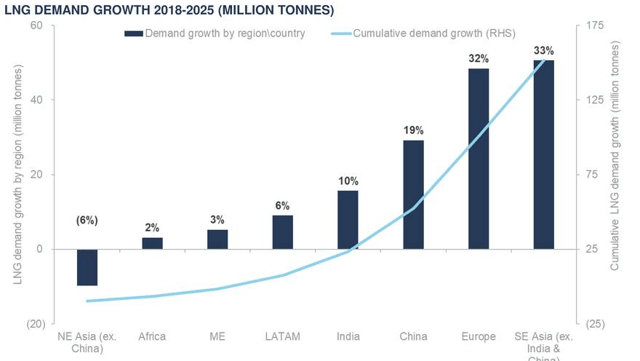 This naturally has resulted in a growing demand among energy companies for liquefied natural gas tankers. This seems somewhat obvious as these tankers are the only way to transport the compound across the ocean from producing regions to consuming nations. This is evident in charter activities as energy companies put 24 tankers under long-term charters in the third quarter of 2019. This is a substantial increase over both the 19 vessels that received such charters in the second quarter of 2019 and the 12 that were chartered in the second quarter of 2018. Clearly then, there is substantial demand among firms that are trying to lock in both charter rates and ensure that they have enough carriers available to meet their shipping needs. This has also pressured the availability of ships in the spot market and Poten reports that only three tankers are available for immediate use. If that continues, it may encourage even more chartering of vessels under long-term contracts, which gives us some confidence that GasLog Partners should be able to quickly secure new work as its vessels become available.

This very strong interest across the industry for putting vessels under long-term contracts has also produced some growth opportunities for GasLog Partners. This comes from the partnership's ability to purchase ships from GasLog Limited that secure long-term contracts. There are 14 such ships as of the end of the third quarter of 2019, some of which are still under construction: 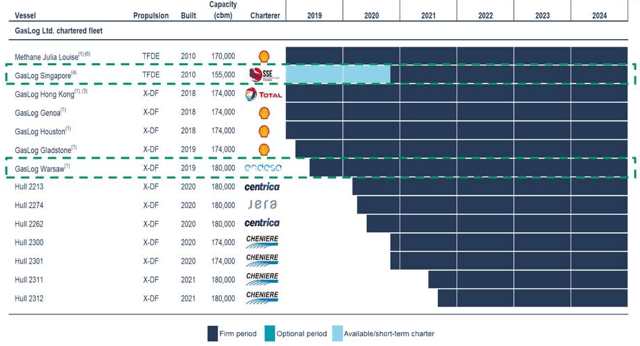 This is a greater number of ships available to be bought by the partnership than we have seen in previous quarters. The reason for this is the GasLog Singapore securing a new long-term charter during the quarter and GasLog taking delivery of the GasLog Warsaw in August (the vessel secured an eight-year contract with Endessa back in March). With these additions, the company's pipeline has a total charter backlog of $3 billion and an average charter length of eight years. If GasLog Partners were to purchase all of these vessels, then we could expect its annualized EBITDA to be about $300 million higher by the beginning of 2022 than it is today. This is roughly 104.49% higher than today's levels based on GasLog Partners' annualized third-quarter 2019 EBITDA. This is certainly a very respectable growth rate over the next two years. With that said though, we have no guarantee that the company will actually purchase all of these vessels and realize all of this growth, particularly as the cost of doing so will likely be quite prohibitive. Nonetheless though, it will likely see some growth and just the existence of this pipeline is very promising to see.

As you may recall, one of the biggest problems that the company had in the first half of the year is that its distribution coverage was a little light. While it was generating enough money to cover the distribution that it pays out, it did not have nearly as large of a margin of safety as I really like to see. However, I thought it would be okay as I expected this to improve in the second half of the year. We did see that here as the company kept its distribution steady at $0.55 per unit but saw its distributable cash flow increase as expected. In the third quarter of 2019, GasLog Partners achieved a distribution coverage ratio of 1.30. This is generally a high enough ratio to ensure that GasLog Partners should have little difficulty maintaining its distribution with a reasonable margin of safety in case its cash flow declines for some reason.

In conclusion, this was certainly a reasonably solid quarter for GasLog Partners despite some of the usual disappointment that we may have felt when looking at the headline numbers. The liquefied natural gas growth thesis remains alive and well and GasLog Partners continues to look like a very good way to play it. The company also managed to assuage some of the concerns that we had earlier in the year, which was very nice to see. Overall, the company continues to deserve a position in our energy income portfolio.

Power Hedge
12.63K Followers
Author of Energy Profits in Dividends
In-depth Research on underfollowed dividend stocks with 7%+ yields
Power Hedge is an independent stock research and analysis firm with a passion for macro- and microeconomic analysis. Power Hedge focuses our research primarily on dividend-paying, international companies of all sizes with sustainable competitive advantages. Power Hedge is neither a permabear nor a permabull. However, we believe that, given the current structural problems in the United States, the best investment opportunities may lie elsewhere in the world. The firm's strategy is primarily buy and hold, but will stray from that strategy on occasion. Our ideal holding period is forever, however we realize that both internal and external forces can impact an investment. For this reason, we believe that it is vital to keep a close eye on all of your investments. We do not believe in changing an investment based on short-term market swings.

Disclosure: I am/we are long GLOP. I wrote this article myself, and it expresses my own opinions. I am not receiving compensation for it (other than from Seeking Alpha). I have no business relationship with any company whose stock is mentioned in this article.

Additional disclosure: This article was posted to Energy Profits in Dividends nearly a month ago. Subscribers to that service have had time to act on it.

53 Comments
To ensure this doesn’t happen in the future, please enable Javascript and cookies in your browser.
Is this happening to you frequently? Please report it on our feedback forum.
If you have an ad-blocker enabled you may be blocked from proceeding. Please disable your ad-blocker and refresh.