Synopsys (NASDAQ:SNPS) reported 4Q results which had strong revenue and EPS, and similarly in August when it released 3Q results that beat estimates. Although the headline figures look strong, ASC 606 helped recognize record IP bookings upfront due to the strong IP market in 2019. Core EDA revenue were in fact down about 0.9% YoY and 1.8% QoQ on a reported ASC 605 basis, but up about 2.7% YoY if we compare ASC 606 on ASC 605. Further, 1Q20 guidance is a bit soft and implies prolonged slowdown on the revenue. Recently, I wrote about Cadence's market share wins and I believe that it was at the expense of Synopsys. I suggest waiting for a better entry price to buy the shares as current valuation appears to be high. Long-term prospects are solid as EDA and IP markets are growing healthily due to upcoming end-markets in IoT, 5G and AI etc.

IP & system integration revenue reached $275.5m but actually declined 3.7% QoQ on a reported ASC 606 basis. The IP market have been very strong in 2019 so a pullback here in the 4Q is a bit of a negative surprise.

I believe the softness in APAC sales were partially related to the export control set by the United States to China. APAC sales fell from 33% of total in revenue in 3Q19 to 28% in 4Q19.

If we look at the revenue trends each quarter from 2018Q1, we can see that both the YoY and 2-year growth rates are slowing. I believe it is because of the competitive EDA market where Synopsys has lost share in. 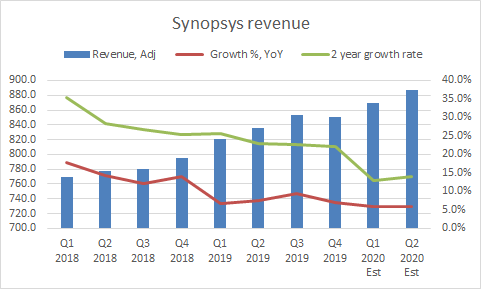 Compared to the Street estimate of $870m, 1Q20 revenue is guided between $805m-$835m with the midpoint implying flat YoY growth. This guidance assumes no revenue from companies currently on the U.S. government’s entity list. I believe the low guidance will be a disappointment for investors. The company still targets in the long-term for total revenue to grow in the high single-digit range with EDA increasing mid-high single digit, IP & System Integration revenue in the low double digit range and software integrity revenue in the 15-20% range, exceeding industry growth.

With a slowing revenue growth rate and competitive share losses to rival Cadence Design Systems (CDNS) as the latter is growing into EDA with its Clarity 3D solver, I think the current valuation is too high given that it is trading at more than 1 standard deviation above its historical mean if we look at the forward P/E ratio.

I suggest to wait for a more attractive price level to buy as I believe Synopsys still has market leadership in EDA and that this industry is still projected to grow healthily with the boost from end market demand like IoT, 5G and AI etc.

Himalayas Research
813 Followers
Buyside analyst covering global consumers and tech. I've been investing personally and professionally across major equity markets for a few years. Subscribe for equity research and trading ideas.Opinions are not qualified investment or trading advice. Please do your own due diligence.

Additional disclosure: Disclaimer: All research, figures, and interpretation are provided on a best-effort basis only and may be subject to error. Any view, opinion, or analysis do not constitute as investment or trading advice, please do your own due diligence.