A supply shortage is imminent in the uranium market. Some analysts believe that the market is already in deficit. Current spot prices are still well below historical norms, and a large portion of nuclear utilities need to renew long-term contracts soon. Nuclear utilities are waking up to the fact that a shift is occurring. Spot prices increased at the end of November on higher than typical volumes. The narrative shift is beginning.

History shows that narrative shifts in the uranium market can be quite dramatic. 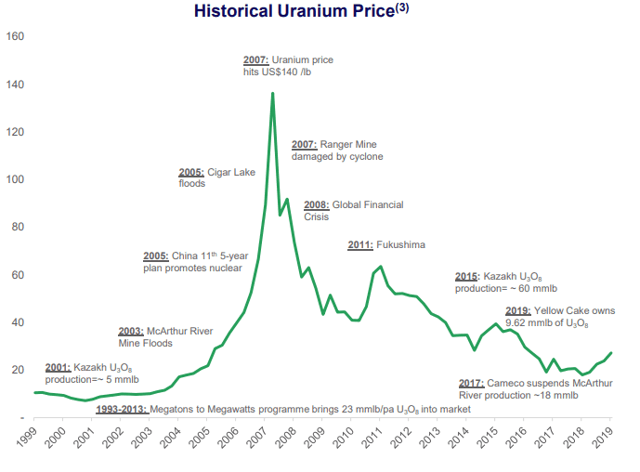 The World Nuclear Association's reference as scenario shows current capacity falling short of requirements. "Unspecified supply" means that there is likely to be a shortage without a massive increase in production. 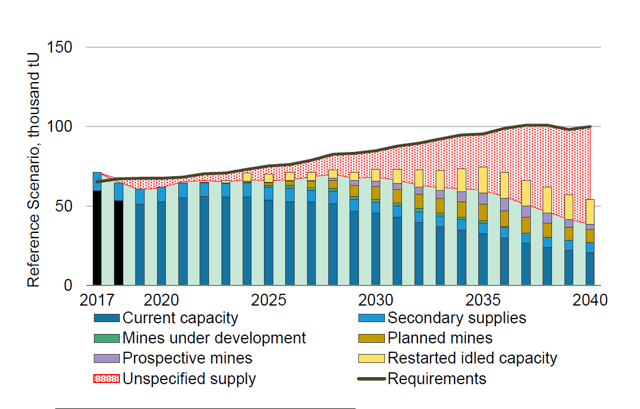 Sachem Cove Partners has estimated a large deficit within a decade: 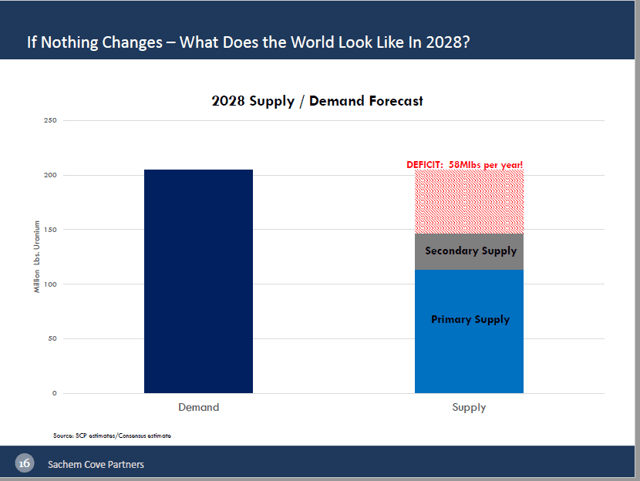 The price of uranium would need to at least double to make new supply economical. Cameco (CCJ), one of the world's largest suppliers has closed down mines, and is buying on the spot market to meet long-term contracts because current prices are too low to justify spending money on production. Clearly this is an unsustainable situation. Higher uranium prices would drive much higher market caps for uranium mining companies. In their WNA presentation above, Sachem Cove also estimated that developers would need 4.5x their current market capitalization to build mines necessary to meet forecast demand from nuclear power companies.

The prices of uranium and of mining companies imply that nuclear power is disappearing, when in fact it is likely to increase in importance in the next decade. The US still gets 20% of its energy (and 55% of its clean energy) from nuclear power. Nuclear Fuel Working Group has delayed its report, but the new energy secretary has spoken favorably about nuclear facilities. Although Europe has tried to promote wind and solar, it is recognizing that nuclear has an important role to play in fighting climate change, and that it can't be energy independent without nuclear power. Even if there is a decline of nuclear power in the western world, new nuclear reactors coming online in emerging markets, especially China, could alone drive a uranium bull market. Not only is China ramping up its own capacity, but it's also promoting nuclear power in other developing countries as part of its belt and road initiative. Although it doesn't have the best public relations, nuclear is objectively carbon free. Indeed if the world wants baseload power to be carbon free, it needs to use nuclear power. Wind and solar become prohibitively expensive once they exceed 40% of the total electricity generation in a region.

In a previous article, I discussed buying companies that hold physical uranium and invest in uranium royalties such as Canada listed Uranium Participation Corp. (OTCPK:URPTF) and UK listed Jersey based Yellow Cake PLC (OTCPK:YLLXF). Junior uranium miners offer far greater potential upside, albeit with far greater risk. Specialist investors spend years developing the skills needed to evaluate individual mining companies and explorers. One uranium investor I spoke with claims he had built a model for every existing mine in the world. Many others have formal education in geology. Often they invest in early stage explorers, getting discounted warrants in addition to equity. For non-specialist investors who recognize the compelling macro case, it is far better to buy a basket of mining companies and explorers. Some will go bankrupt or dilute investors en route to expansion, but a small handful of winners will drive the overall portfolio returns.

US based investors have had minimal ETF options to get direct exposure to the uranium space. Global X Uranium ETF (URA) follows a benchmark that contains a large portion of utilities. Its rebalancing away from a pure uranium focused portfolio was actually a major source of selling in 2018. The Horizons Global Uranium Index ETF (TSX: HURA) launched in Canada, but it currently has limited liquidity with only ~$5 million in net assets. Additionally, TSX listed shares may be inconvenient for US based investors. Fortunately, a pure play uranium ETF is finally launching in the US. North Shore Global Uranium Mining ETF (NYSEARCA:URNM) is expected to begin trading on December 4. It will trade on NYSE ARCA, hopefully attracting higher volume than HURA. The new availability of this ETF might also itself become a driver of interest in the uranium space.

URNM follows the North Shore Global Uranium Mining Index. This index was designed by the general partner at Sachem Cove, an investment firm focused on uranium. Mike Alkin is listed as the domain expert on the index website. Note however that Sachem Cove is not technically affiliated with URNM, and the fund will not be actively managed. Exchange Traded Concepts, LLC will function as the adviser. The 0.85% management fee is relatively high for an ETF, although it is a specialist fund.

URNM is as close to a pure play uranium ETF as is possible given the temporarily reduced market cap of the uranium industry. It assigns an aggregate weight of 82.5% to uranium miners, developers and producers, and an aggregate weight of 17.5% to entities holding physical uranium and uranium royalties. Additionally, it has single security weight of 3.30% for non pure play miners. 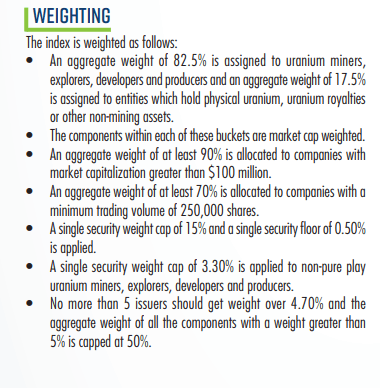 Given the dearth of US based uranium miners, only 12.5% of URNM is in the US (note that CCJ is Canadian). Many holdings are listed in Australia, but have mining assets throughout Africa and the world.

For comparison purposes, here are the top ten holdings in HURA: 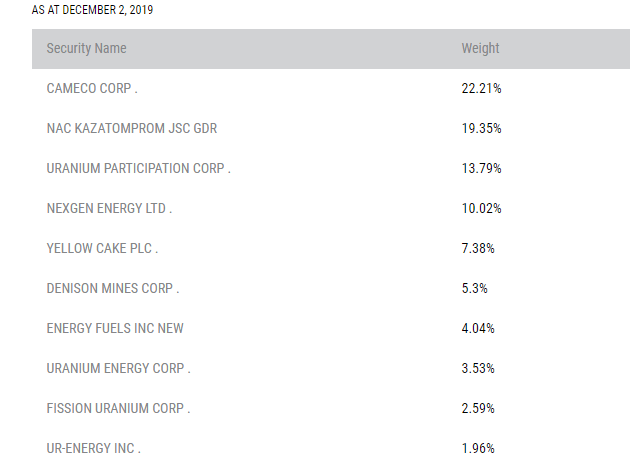 Overall, URNM and HURA have very similar portfolios, but URNM is expected to have a greater emphasis on junior miners. Its methodology for dealing with liquidity issues may also prove an advantage.

URNM will rebalance quarterly. If we experience a repeat of the 2007-2009 uranium bubble, URNM's rebalancing could become a significant driver of volatility for the smaller junior miners that are in its list. Additionally, if it is likely many new junior miners will list during the 2020s, so the components might need to change as more capital goes into the space. However, the individual market cap/category buckets are market cap weighted, so there should be some natural adjustment. Additionally, there are buffer rules in place to deal with liquidity issues.

Uranium presents a massive opportunity for long-term investors to benefit from macro trends driving a severe supply demand imbalance. The new URNM ETF provides a solid vehicle for US based investors to get broad pure play exposure to uranium.

Disclosure: I am/we are long URPTF, YLLXF, CCJ, AND URA. I wrote this article myself, and it expresses my own opinions. I am not receiving compensation for it (other than from Seeking Alpha). I have no business relationship with any company whose stock is mentioned in this article.

Additional disclosure: I will also likely purchase URNM within the next week.