The crude oil that comes from producing nations around the globe has different properties. Lighter sweeter crude oil has a lower sulfur content and is more appropriate for processing into gasoline. Brent crude oil that has higher levels of sulfur and is heavier is a better grade when it comes to processing into distillate products like heating oil, diesel, and jet fuels. Heavier crude oils are preferable for refining into bunker fuels that power ocean vessels. While there are many different grades of the energy commodity, the Brent and WTI benchmarks are the world's leading pricing mechanisms. Two-thirds of the world's crude oil use the Brent benchmark, including oil from Europe, Africa, and the Middle East. The US is now the world's leading producer of the energy commodity, and it employs the WTI benchmark for pricing. WTI futures trade on the NYMEX division of the Chicago Mercantile Exchange. The Intercontinental Exchange lists futures on Brent crude oil.

In another sign of Russian influence when it comes to OPEC's production policy, the final decision for the cartel's plans for 2020 waited for the second day of the gathering last week. OPEC told markets that production cuts would continue into 2020 and would increase by 500,000 to 1.70 million barrels per day.

The sweet spot for the price of Brent oil for many of the members of the cartel is between $60 and $70 per barrel. 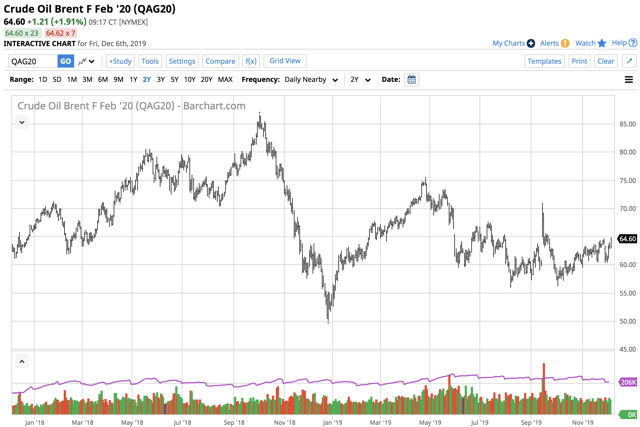 As the chart shows, the price of ICE Brent crude oil futures traded in a range from $56.15 to $71 per barrel since the last OPEC meeting in early July. The high came in the immediate aftermath of the drone attack on Saudi oilfields in mid-September. Even though the strike took out half of the Saudi output, which amounts to 6% of the world's daily supply, Saudi Arabian production returned to pre-attack levels by the end of September. The price of Brent futures spent lots of time below the lower end of OPEC's desired trading range over the past six months.

At the $64.60 per barrel level on Friday, December 6, the price was at the middle of the range after the news of the OPEC output cut.

The demand for crude oil is a function of the overall health and wellbeing of the global economy. The recent weakness in China because of the trade war has been a problem for the price of oil. OPEC's latest decision to extend and increase production cuts through the first six months of 2020 reflects the uncertainty surrounding the impact of protectionism on demand for crude oil.

Iran is a clear and present danger

As US sanctions in Iran continue to have a chokehold in Iran's economy, the theocracy has experienced rising discontent. Reports that Iran killed hundreds of demonstrators is a sign that the sanctions could be weakening the theocracy's power. However, Iran experienced long periods of economic woes since the revolution in 1979, and the leadership is not likely to surrender and could lash out over the coming weeks and months.

The tensions between Iran and the US and Saudis continue to be at a boiling point. Teheran likely had a hand in the drone attacks on Saudi production in September. The bottom line is that the Iranians remain a clear and present danger to any hopes for peace in the Middle East. Since the region is home to half the world's oil reserves, any hostilities that impact the production, refining, or logistical routes for crude oil could cause sudden price spikes, as we witnessed in mid-September.

While the Brent-WTI spread is a location and a quality spread, it is also a barometer for political risk in the Middle East.

As the weekly chart of the price of WTI minus Brent crude oil futures shows, the Brent premium spiked to its most recent high at $7.41 per barrel in mid-September in the aftermath of the attack on Saudi production. Since then, the spread returned to the $5.18 level as of the end of last week. Any problems in the Middle East would likely have a greater impact on Brent than WTI futures.

Meanwhile, Saudi Arabia prices its initial public offering of Aramco shares at 32 riyals per share or $8.53. At that level, the company's valuation is $1.7 trillion, short of the Crown Prince's initial valuation of $2 trillion, but at a level that makes the offering the largest IPO in history. At that level, Aramco would raise $25.6 billion. The company will list locally on the Tadawul, the Saudi stock exchange. Gulf allies in the UAE and Kuwait are likely to make substantial commitments to the IPO. Meanwhile, the IPO is a reason for the Saudis to favor propping up the price of oil via the extension of OPEC output cuts.

At the same time, the IPO increases the potential for Iranian attacks to harm the Saudis financially over the coming weeks. Further hostilities that target Saudi oil output could curb the demand for Aramco shares.

Meanwhile, the Aramco IPO was another reason why the Saudis pushed to expand OPEC's production but and extend a voluntary cut of 400,000 barrels per day.

The U.S. election will be a referendum on energy policy

As we move into 2020, the US Presidential election will take the center of the stage. The US House of Representatives looks ready to impeach President Trump, who will likely avoid conviction in the Republican-controlled Senate. The Democrats will likely adopt a platform that favors the "Green New Deal" that would have a significant impact on US oil and gas output. While the world is moving away from fossil fuels, oil and gas will remain the primary energy sources in the coming years. Any significant change in US production policy starting in 2021 could have a substantial effect on the supply and demand equation for the oil and gas markets. When it comes to crude oil, a drastic change in the regulatory environment in the United States could strengthen the Saudi and Russian influence in the market. We could see prices move to the upside if US output drops appreciably from the current 12.9 million barrel per day level. Meanwhile, if President Trump wins a second term, we would see a continuation of the status quo in output. Therefore, the 2020 election in the US will also be a referendum on energy production.

BNO is the Brent ETF product

While the trade war and protectionist policies could continue to weigh on the price of crude oil, the risk of a price spike remains on the upside. The Saudi's have a short-term vested interest in a higher price. Russia would benefit from an increased price for petroleum. Iran is a destabilizing force in the Middle East. And, the US could experience a drastic shift in energy policy next year at this time.

If the power baton in the oil market passes from the US to OPEC with the Saudis and Russians calling the shots, the price of the energy commodity could move significantly higher. If Iran lashes out over the coming weeks and months, the impact on Brent futures would likely be the greatest.

The investment seeks the daily changes in percentage terms of its shares' per share net asset value to reflect the daily changes in percentage terms of the spot price of Brent crude oil. The Benchmark Futures Contract is the futures contract on Brent crude oil as traded on the Ice Futures Europe Exchange that is the near month contract to expire, except when the near month contract is within two weeks of expiration, in which case it will be measured by the futures contract that is the next month contract to expire. 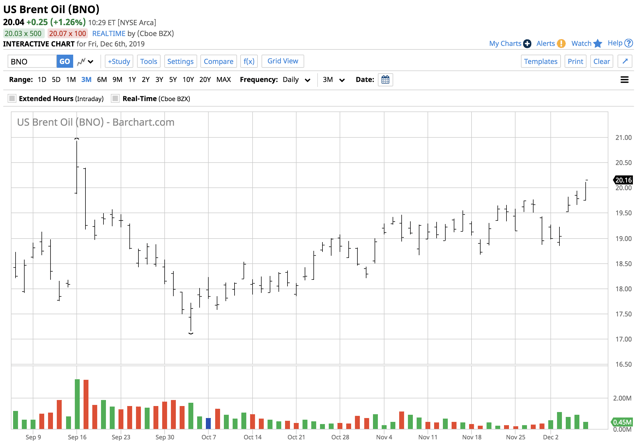 The Brent-WTI spread was sitting around the $5.18 level at the end of last week. All signs are that Brent is likely to continue to outperform WTI over the coming weeks and months.

I am offering a 20% discount for an annual subscription to my service, The Hecht Commodity Report, through December 2019. With the holiday spirit in mind, I am offering a free trial to the service. You can sign up via this link.