The AES Corporation (NYSE:AES) is a soft buy. After a stunning return of 30.8% on a YTD basis, the company still has room for more in the coming years.

There are several appealing aspects of AES. One is that the rating agencies have improved AES’s credit rating from 2016 to 2019. In 2016, the Standard & Poor's rated AES as BB, which is junk grade. As of November 2019, the S&P is ranking the company as BB+. Although the bond rating is still considered junk, the credit quality has improved. Based on my research, however, it seems that S&P is slightly harsh in its evaluation. Due to a strong balance sheet and improving financial metrics, it appears that AES should be rated as BBB, which is investment grade, carrying medium risk. 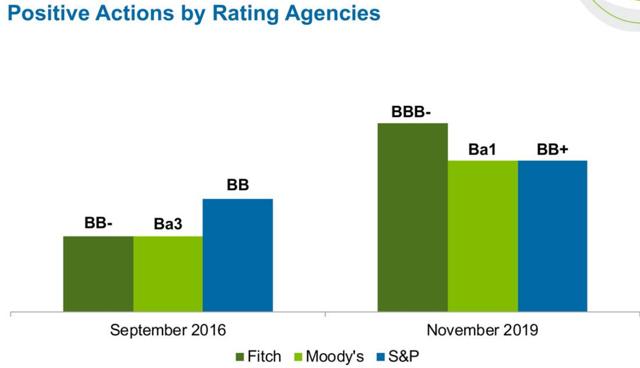 Another appealing aspect from AES is its commitment to lower the carbon intensity, which is the tons of CO2/MWh of generation. In 2016, the company was producing 0.67 tons of carbon dioxide per MWh generated. In 2022, the company commits to decreasing the carbon intensity by 50% to 0.36. In 2030, the company aims at reducing it by 70% to 0.22 compared to the 2016 levels. This is an appealing plan because it shows that AES is a socially responsible company. Nowadays, commitments to lowering the environmental impact are becoming significant for investors. 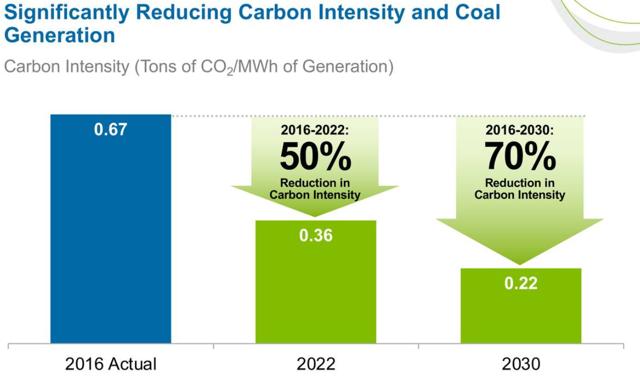 Investors can already see the commitment to reducing the environmental impact. Currently, the company has a 6.1 GW backlog of mostly renewables, of which 3.0 GW are already in construction. The rest is signed but not yet under construction. AES expects to sign between 2 and 3 GW per year, split 50/50 between the US and international, and wind and solar. On a YTD basis, the company is close to reaching its goal, as it has already signed 1.94 GW. Only in Q3 2019, the company signed 921 MW. One aspect that we should look forward to is the backlog at the end of Q4 2019 to see if AES reached the goal of 2 GW. 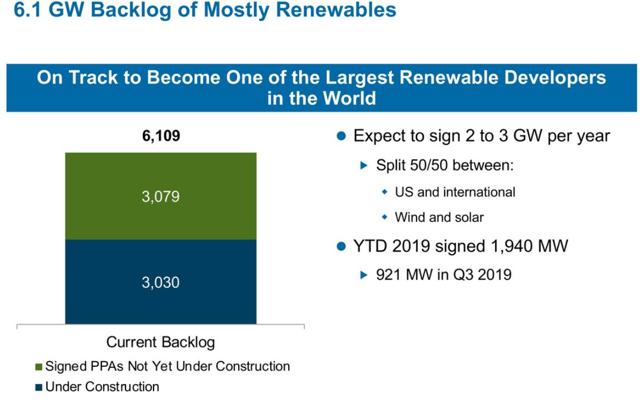 Since the company is mildly cyclical, it makes sense to compare revenue and EBITDA on a Q/Q basis. From the revenue perspective, the story looks neutral. Revenue has been stuck in a range between $2.48 billion and $2.84 billion over the past eight quarters. Nonetheless, the gross margin has ticked higher for Q3 2019 on a Q/Q basis, from 20.2% to 26.7%. On a Y/Y basis, the metric expanded by 300 basis points. 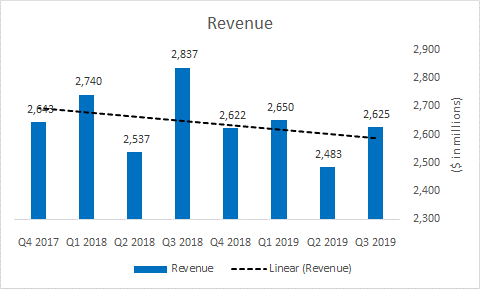 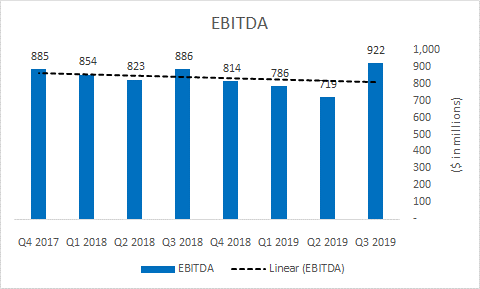 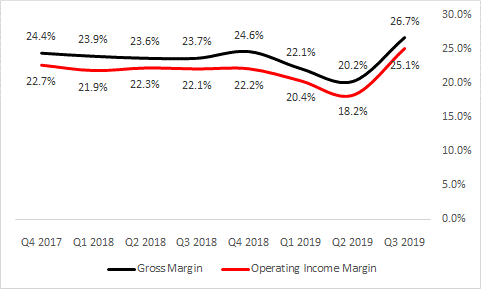 AES’s operational performance has improved substantially. However, should investors expect the improvement to continue? It seems that they should not.

The ROE coefficient tells how many dollars of net income the company produces per dollar of shareholders’ equity. However, it does not illustrate what is driving such efficiency. Hence, the importance of the DuPont summary. The analysis gives an idea of the company’s tax and interest burden, operating income margin, asset turnover, and equity multiplier. The following tables contain the DuPont analysis inputs and summary. The amounts are in millions unless ratios or otherwise noted.

Below are the changes made to the DuPont ROE formula. 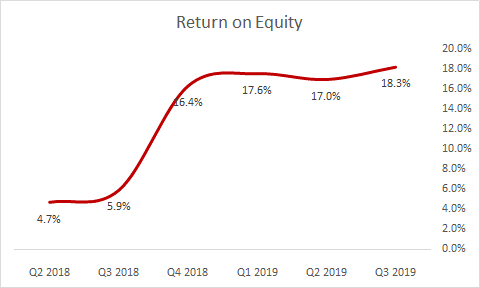 The first driver is the tax burden. The metric describes the ratio EBT from continuing operations after the company pays taxes. In this case, higher is better. In AES’s case, the tax burden has soared substantially from 0.2 in Q2 2018 to 0.7 in Q3 2019. However, going forward, investors should expect a tax burden ranging between 0.7 and 0.8, as companies usually have effective tax rates around 25%. Therefore, do not count on the tax burden to improve the ROE going forward.

The second driver is the interest burden. The metric tells the ratio of operating income that the company keeps as EBT from continuing operations after funding the net interest expense. In this case, higher is better. In AES’s case, the interest burden has improved slightly, but it is not something to get excited about. Currently, the interest burden sits at 0.7, up from 0.6 in Q2 2018.

The asset turnover tells the amount of revenue that the company generates per dollar of assets. In AES’s case, there is not much to write home about, as the coefficient sits at 0.3. Also, the ratio has remained unchanged over the past six quarters.

Lastly, the equity multiplier is a form of financial leverage, which considers current and long-term liabilities. In general, a coefficient above 3.0 raises warning flags. A factor above 5.0 is dangerous for equity holders. AES’s equity multiplier is high, at 6.0. Nonetheless, the coefficient has remained stable at that level over the past six quarters. Further discussion regarding AES’s financial leverage comes in the next section.

In brief, while the operating performance has improved substantially over the past six quarters, primarily due to an improving tax burden. Therefore, we should not expect the improvement to continue in the long run.

Assessing debt sustainability is important because, in the event of default, creditors have a priority in asset claims compared to equity holders. The interest coverage ratio and the debt-to-equity ratio are two metrics that provide color on debt sustainability. The former tells if the company can pay the distribution from operating income. The latter describes the leverage level from the long-term debt perspective only. Ideally, the ICR should be above 3.0. When the ICR falls below 1.5, the company should pay close attention to the operating income. When the ICR falls below 1.0, the company should act immediately to remedy the situation. Regarding the D/E ratio, the metric signals danger when it is higher than 5.0.

The interest coverage ratio has remained relatively stable at 3.0 over the past six quarters. In brief, investors should not be concerned at AES’s ability to fund the interest expense from its operating income.

From the D/E perspective, the story also looks appealing. AES’s financial leverage has remained stable at 3.7 over the past six quarters, as the long-term debt and the shareholders’ equity have remained relatively unchanged.

The Debt/EBITDA is high at 6.1. However, since it has not changed meaningfully over the past six quarters, it seems that the company has the leverage that it considers appropriate. 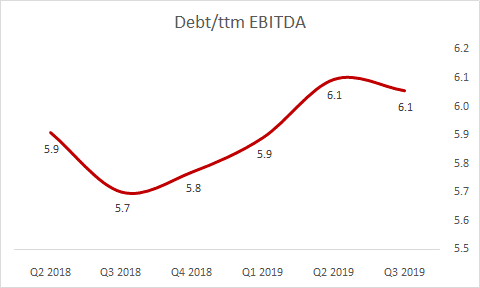 From the CFO side, the story looks neutral. Over the past six quarters, the DCF has remained at 1.0. In other words, the cash flow generated from the operations only covers capital expenses and distributions. While the distribution is not compromised, investors must not expect significant distribution hikes in the interim unless the company can boost revenue.

It is essential to peek at relative valuation. However, bear in mind that not because a company looks relatively overvalued or undervalued, you should act on it. Perhaps, the relative over- or undervalued status is justified.

One metric that helps to assess the relative valuation is the EV/EBITDA. The primary advantages of using the coefficient are that the company's capital structure is irrelevant, it uses market values, and it is not affected by taxes. Another metric that investors commonly use is the P/E ratio. However, the most significant drawback is that the coefficient cannot be used when companies post net losses. Since AES is profitable, using the P/E is appropriate. The P/S also helps in valuing companies on a relative basis, as it is indifferent to the company's profitability. Another popular metric is the P/B ratio. However, the primary disadvantage is that companies rarely reflect the real value of the assets in the balance sheets. To value AES, we will delve into the EV/EBITDA, P/E, and P/S ratios.

From the EV/EBITDA perspective, the story looks bullish at first glance. AES’s coefficient is 9.5, well below its peers’ median of 11.8. 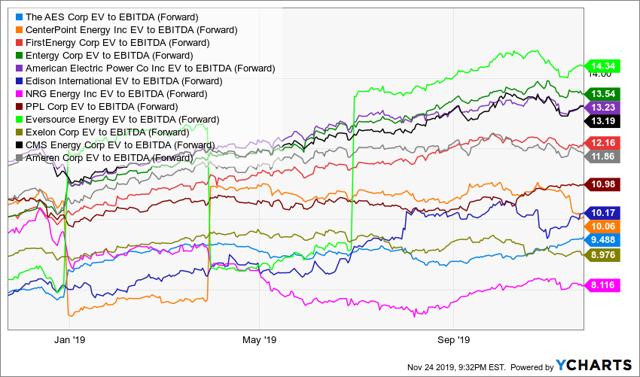 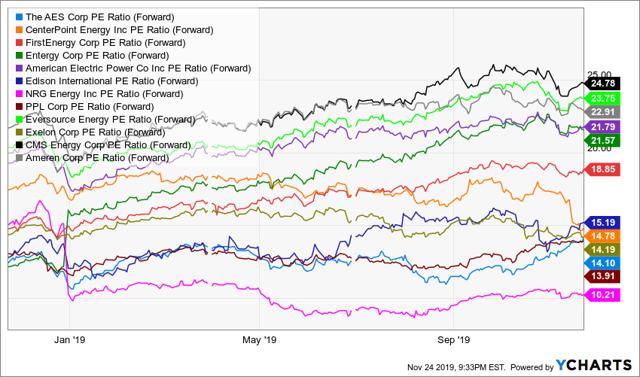 Finally, AES also appears to be undervalued compared to its peers according to the P/S ratio. AES’s metric is 1.2, well below its peers’ median of 2.2. 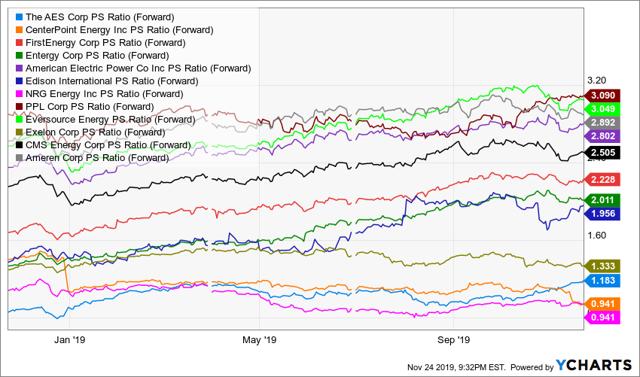 The company is a soft buy. AES' backlog is healthy, and the company seems to have attainable goals regarding the GW signups. Furthermore, there are no concerns about AES's financial leverage. Moreover, the distribution appears to be sustainable. Lastly, the company seems to be slightly undervalued compared to its peers, even after returning 30% to shareholders this year.

Freedom in Retirement
1.55K Followers
In 2015, I predicted the crash of several oil and gas companies. I did the same thing in 2019, using my modified DuPont formula. Readers criticized me, and Seeking Alpha did not find any value in my articles. I guess that the market is the final judge.My best recommendation for everyone is: Be careful who you follow in the platform. Some authors seem like they know what they are talking about. Once you check their performance, you realize that you could do better flipping a coin. Also, do not use Tipranks to check their performance, as it is biased. Check their articles from one or two years ago and see how they have performed.
Follow

Additional disclosure: The opinions expressed herein are the author’s sole views, and they do not constitute investment advice in any form. Past performance may not be indicative of future performance. Always do your due diligence, and determine if the investments mentioned here suit your risk tolerance and objectives, your return objectives, and your personal constrains.