Euronav is one of the best tanker companies in the world yet it does not trade at a premium to peers, in fact it currently trades at a discount to many of the other top names. Euronav has a very strong balance sheet and in a strong market can provide very strong returns to its shareholders, primarily in the form of large dividends.

Euronav (NYSE:EURN) is an international shipping company focused on the transport of oil. The company is headquartered in Antwerp, Belgium. Their fleet consists of two ULCCs (ultra large crude carriers), 42 VLCCs and 26 Suezmaxes, and an interest in a Joint Venture with International Seaways (INSW), the "FSO JV". Recently, Euronav bought a couple Suezmaxes in a new Joint Venture together with affiliates of Ridgebury Tankers and clients of Tufton Oceanic. EURN holds a 50% stake in this new JV. The price tag on the two vessels was $40.6 million and both vessels should have been delivered by now.

EURN has taken a very interesting approach to IMO 2020, buying compliant fuel before the spread between HSFO and compliant fuels "exploded". I'll get into their strategy later on.

The crude tanker market has had a turbulent start of the fourth quarter. It skyrocketed when sanctions were imposed to Cosco Dalian before giving away a big part of those gains later on. The insane surge in tanker rates that the sanctions caused "masked" the fact that the market was already tightening, with spot rates rising counter-seasonally before sanctions were imposed.

Oil demand is expected to grow by about 0.9 mbpd this 2019. This growth is expected to accelerate to about 1.2 mbpd in 2020 with most of it coming from the Asia/Pacific zone and the Americas.

The IEA recently stated that they expect growth in the 2nd half of 2020 to amount to approximately 1.6 mbpd.

Demand for oil is pretty inelastic, but an economic shock could reduce demand for oil (keep in mind the last YoY drop in oil demand occurred during the financial crisis). If we do not enter a recession demand for oil should be fine. 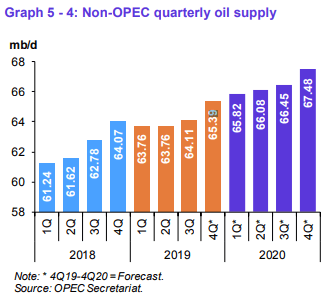 Oil supply is expected to be ample and sufficient, "forcing" the OPEC cartel to diminish the output during the next 5 years while other countries like the US continue expanding production.

From a tanker point of view, the current oil market is very constructive, with prices high enough to allow investments in future production while not being too high (which would be demand destructive). 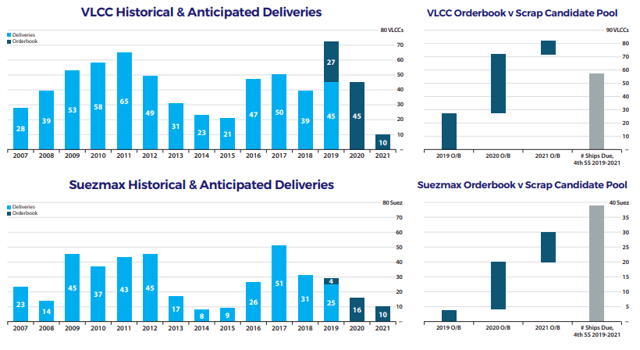 In the image above we can see the anticipated deliveries and scrap candidates for both the VLCC fleet and the Suezmax one (EURN has VLCCs and Suezmaxes).

After 72 deliveries this 2019, there are only 45 vessels expected for 2020 and just 10 for 2021. The tanker market has been able to digest pretty well the deliveries this year, which suggests that with a way smaller amount of ships being delivered the next two years rates will remain firm.

The Suezmax orderbook is pretty bullish too, but not only due to not too many deliveries but because there will be 39 ships having the fourth special service between 2019 and 2021 (a good moment to scrap).

The current environment is characterized by IMO 2020 preparations, with ships being retrofitted with scrubbers and some vessels trading as storage, which provides an "artificial" short term boost. Though, this short-term boost can turn out to be a medium term boost due to the big spread we are seeing between compliant fuels and HSFO (high sulfur fuel oil). If the spread is big, ships will keep going to shipyards.

The prolonged downturn helped adjust the global fleet, with about 50 VLCC equivalent leaving the fleet. This has "made room" for the big amount of deliveries we have seen this 2019.

In the Euronav Q3 earnings call, management stated that during the next 7 years there will be at least 25 VLCCs hitting 20 years of age yearly, which should provide insurance against any downturn (if rates are low old ships are scrapped).

The orderbook will likely remain subdued due to uncertainty regarding future regulations. According to UK broker Gibson, the tanker orderbook is at the lowest level this century. IMO 2030 and its effect on greenhouse emissions is creating a lot of uncertainty, as no one wants to order ships that may be obsolete by 2030, putting additional downward pressure on orderbooks.

Therefore, everything seems to point to continued strength in rates, albeit not at current levels, which are a combination of seasonality, scrubber retrofits and vessels trading as storage.

EURN fleet is young, with an average age of about 7 years. They own a lot of ECO VLCCs (about 75% of their VLCC fleet), which already have a lower fuel consumption than average VLCCs. Euronav had been a vocal critic of scrubbers until their September 5th presentation, were they stated that they were willing to install scrubbers on non-ECO VLCCs depending on market conditions. They stated that the fact that they were not first-movers could prove advantageous, as they would be able to see potential problems with scrubbers which would help avoid them.

EURN way of complying with IMO 2020 has been buying compliant fuel before the spread between it and HSFO skyrocketed and storing it into their ULCC Oceania. In the September 5th presentation EURN stated that they had purchased the equivalent of 420,000 metric tonnes of compliant fuel and marine gasoil at an average price of 447 vs 400 per metric ton of HSFO during the period.

To avoid potential problems of fuel compatibility the company has hired a dedicated fuel oils specialist team to procure, test and store new compliant fuels for their own use.

My take is that EURNs strategy is the most conservative we have seen; they are covered if the spread is very high and if it is very low. They have been able to secure supply at very attractive prices for at least half of their 2020 fuel consumption. If the spread remains very elevated by then, the company can decide to install scrubbers on some of their non-ECO VLCCs, but if the spread collapses (I view this as highly unlikely) they can just keep burning compliant fuels on the whole of their fleet.

EURN currently has 56 vessels trading on spot (54 when we take out the ULCCs Oceania and Europe). 35 of those are VLCCs and the other 19 Suezmaxes (EURN website)

By this assumptions EURN should have $312M in revenues.

We should deduct vessel operating expenses of about $52M, general and administrative expenses of $15M, depreciation of $85M and $31M in financial expenses. This would get us a net income of ~$129M (when adding $4M in net income from the FSO JV it would get up to $133M). Cash flow would be of about $214M (without taking into account FSO dividends). Consider that voyage expenses and commissions of about $35M is already deducted when calculating TCE.

When taking into account that INSW sold one of their JVs just a tad above its book value it seems fair to value the FSO JV between INSW and EURN at $135M. That JV is generating about $33M in net income each year (Q3 run rate). The company had about $150M in bank debt, so the EV of this JV would be of about $150M+$135M*2=$420M (keep in mind these figures are for the whole of the JV, in which EURN holds a 50% stake). This information has been extracted from INSWs Q3 presentation and Q3 10-Q.

Therefore, when valuing EURN we can either deduct $135M from their EV and not account for the JV earnings or count them while not deducting the $135M (if we deduct the value from EV and count the earnings we are "double counting" the same thing).

TCE to earnings table. Considering 68 ships. EV/EBITDA calculated deducting the $135M from the FSO JV (and therefore not counting its earnings).

To calculate EBITDA we add depreciation and financial costs to net earnings ($460M).

Euronav is a premium shipping company with good management and a very strong balance sheet. The tanker market is a commodity business, companies have fixed costs, so every incremental $ in revenue flow straight into the bottom line.

Euronav trades at a P/NAV of 0.88, which compares favourably to FRO's 1.69 and DHT's 1.13, which are the closest comps. This premium is partly explained by the fact that both competitors are more leveraged and therefore a very strong market should benefit them more, but it does not warrant a difference from 0.88 to 1.69, which is nearly a double.

The company has balance sheet debt in the mid 40% range, below their 50% target as stated in the Q3 earnings conference call. This means that at adequate prices EURN is going to become a consolidator, as we have seen with the new JV announced this November.

Being less levered than they would like to be means they could pay a big percentage of cash flows during this upturn, gradually incrementing leverage just by letting assets depreciate. Management has already stated that they will be a big dividend payer starting in 2020; however, they did not want to set an exact percentage of earnings, in order to have more optionality between share buybacks and dividends.

The stance they have taken can prove to be very interesting as they have been able to test the fuels, and therefore should be able to avoid any compatibility problems. Their strategy also lets them avoid any potential problems with scrubbers, as the technology will have been tested massively by competitors before any installs.

EURN is one of the cheapest companies in the sector and the risk reward is compelling due to their low leverage, huge payout capacity and their flexible stance on IMO 2020.

Climent Molins
589 Followers
Climent Molins holds a bachelor in business administration and a bachelor of laws, both from the University of Barcelona. Climent enjoys researching and analyzing publicly traded companies, and he shares part of his work publicly on Seeking Alpha. Climent is also an Associate Research Analyst at Value Investor's Edge, where he started contributing in 2020. This role has allowed him to deepen his expertise in the shipping sector. Additionally, he also completed an internship in Crowe Global as an audit junior.  Legal Disclaimer: Climent is not a financial advisor. His contributions to Seeking Alpha are for educational and informational purposes and should not, under any circumstance, be considered investment advice.
Follow

Disclosure: I am/we are long EURN. I wrote this article myself, and it expresses my own opinions. I am not receiving compensation for it (other than from Seeking Alpha). I have no business relationship with any company whose stock is mentioned in this article.

Additional disclosure: This article is for educational and informational purposes and should not be considered investment advice. I am not a financial advisor.

57 Comments
To ensure this doesn’t happen in the future, please enable Javascript and cookies in your browser.
Is this happening to you frequently? Please report it on our feedback forum.
If you have an ad-blocker enabled you may be blocked from proceeding. Please disable your ad-blocker and refresh.