Outperformance in the XAU index is normally good news for the metal.

Gold stocks are also showing strength against the S&P 500 Index.

One of the key elements I always look for when evaluating gold's future prospects is the relative share price strength of companies which mine gold. The strongest gold bull markets are always accompanied and preferably led by the gold stocks. In this report, we'll look at the evidence which shows relative strength and leadership in the leading gold miners. I'll make the case that this is a bullish harbinger for gold's intermediate-term outlook.

Gold investors have been nervously awaiting the outcome of three months' worth of consolidation in the metal's price. After peaking in early September around the $1,560 level, gold has tested the patience of the bulls after a gradual downward slope in the metal's price to the $1,450 level. While some participants worry that gold could break down even more in the coming months, the likelihood is that gold's 3-month consolidation represents a "correction" in an ongoing long-term upward trend. 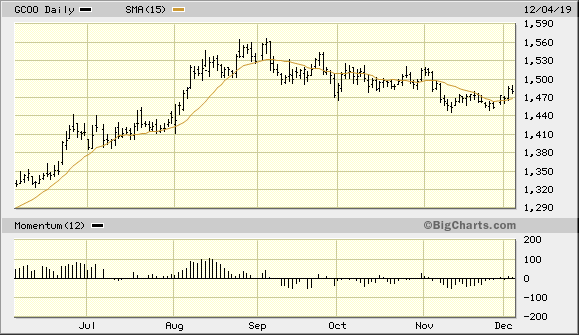 One important sign that gold's intermediate-term (3-6 month) path is likely to be higher is to be found in the share price performance of the leading gold mining and exploration companies. Historically, leadership in the PHLX Gold/Silver Index (XAU) - the U.S. benchmark for the major gold and silver producers - has served as a precursor to strength in the physical gold price. Moreover, a lack of strength in the leading gold mining stocks is almost always bad news for gold's interim price trend. In other words, the XAU should both lead and confirm a bull market for gold.

As can be seen in the above graph which shows the continuous contract gold price, the yellow metal has trended lower since peaking in September. Yet when compared against the XAU index, gold mining shares are displaying a remarkable amount of relative strength. The following graph compares the gold price with the XAU. As you can see, gold mining shares have been conspicuously outperforming the physical of late.

Relative price strength is an important consideration when evaluating gold's intermediate-term prospects. The institutional players which can decisively move the market take relative market strength comparisons into account when making asset allocation decisions. The most important of these inter-market comparisons is how well any given asset is outperforming the benchmark S&P 500 Index (SPX). Since equities have established a long-term upward bias, it makes sense that institutions will consider buying commodities or other asset categories only when they are in a position to outperform the SPX in relative terms. The following chart illustrates the outperformance of the XAU index versus the S&P 500.

As this graph suggests, gold mining stocks are gradually showing improvement vis-à-vis the SPX on a short-term basis. If this improvement continues, then it will not only argue in favor of a renewed upside move for the gold miners, but for physical gold as well due to the historical leadership position of the miners.

Let's now turn our attention to the internal condition of the mining stocks as a group. As we've talked about in recent reports, gold stock internal momentum has been supportive of a breakout in the XAU for the last few weeks. While it looked briefly last week like that momentum was starting to fade, it has since picked up again and has risen to new multi-month highs. Below is the 4-week rate of change (momentum) of the new highs and lows for the 50 most actively traded gold stocks. This indicator has been supportive of an upside breakout for gold shares for some time but is only now feeding a rally in the XAU. 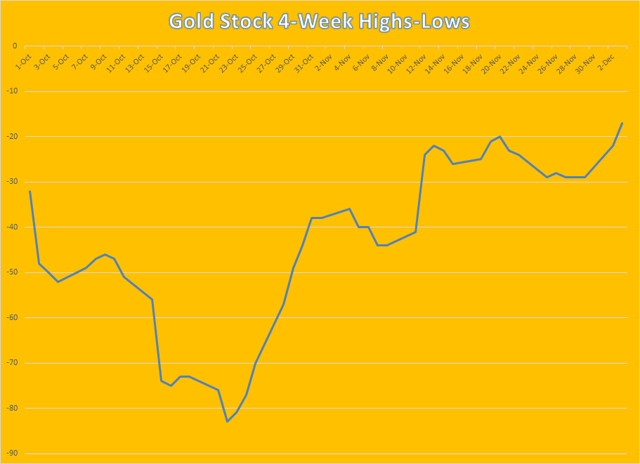 The cumulative new highs and lows of the actively traded mining shares are my favorite way of gauging the incremental demand for the miners. With the momentum of the highs and lows on the rise, it suggests that the path of least resistance for the gold stocks is currently up. Consequently, this should make it very easy for any favorable news for the gold mining stocks which crosses the wires in the coming weeks to have a lifting effect on gold stock prices.

In the last couple of trading sessions, moreover, the XAU index has also broken out to a 10-week high as trade tariff concerns once again command center stage. Leadership in the XAU is an ideal backdrop for a rally in the physical metal, so hopefully, we'll soon see the gold price follow the XAU's lead.

Turning our attention to the VanEck Vectors Gold Miners ETF (GDX) is very close to confirming a technical breakout signal. GDX is my preferred trading vehicle for the gold mining stocks and the ETF I refer to most frequently in this report. A move above the 28.00 level would establish a stair-stepping pattern for GDX - something the fund has been unable to do in quite some time. A move above this level would form the basis of a renewed short-term upward trend and would also suggest that the bulls are making a serious run on the stops among committed bears, who in turn would likely be forced into short-covering based on the tendency for round numbers to serve as a stop-loss magnet. For disclosure purposes, I plan on purchasing a conservative position in GDX on the next intraday move above 28.00. 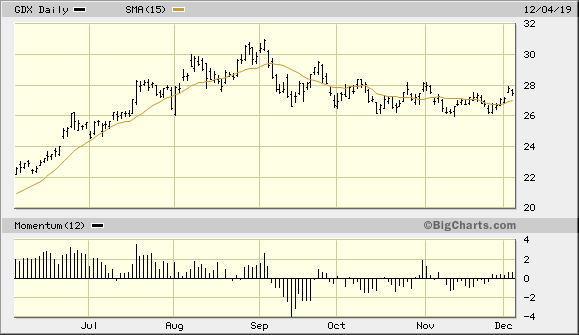 In view of the favorable technical developments for the gold mining stocks, investors have a good reason for expecting that gold's longer-term upward trend will resume in the coming weeks. Relative strength in the XAU index versus the physical metal is one such reason for expecting a strong intermediate-term performance for bullion. Strong internal momentum for the leading U.S.-listed mining shares is another favorable factor for both gold and the mining stocks. Accordingly, investors are justified in maintaining a long-term bullish bias toward the yellow metal.

Disclosure: I/we have no positions in any stocks mentioned, but may initiate a long position in GDX over the next 72 hours. I wrote this article myself, and it expresses my own opinions. I am not receiving compensation for it (other than from Seeking Alpha). I have no business relationship with any company whose stock is mentioned in this article.