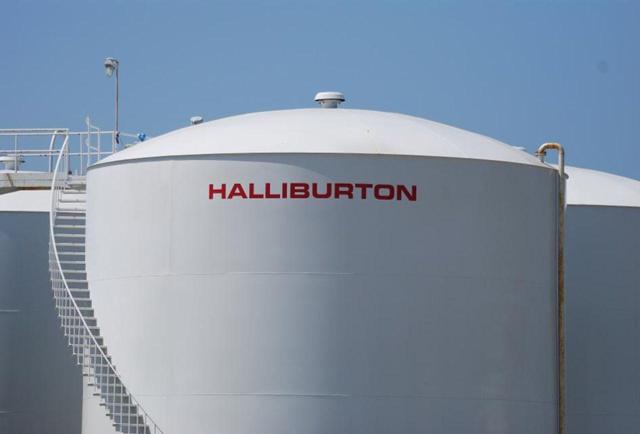 Earlier this month Halliburton (NYSE:HAL) announced it was laying off more than 800 employees amid a slump in the oil patch:

Halliburton is laying off more than 800 employees in El Reno, Oklahoma, and says it expects to close its office in the Oklahoma City suburb.The move by the Houston-based company is expected to have limited impact, if any, in Texas. Companies are required to file advance notice for large layoffs in Texas, and none has been filed by Halliburton in recent months.Oklahoma Office of Workforce Development spokesman David Crow says the agency was notified of the layoffs and apparent closure of the office, effective Monday.

Oil markets are cyclical in nature. Over the past few years oil prices may have become divorced from economic forces. They may have been more sensitive to OPEC supply cuts than actual demand for oil. Brent oil is now around $64. OPEC and Russia recently agreed on deeper supply cuts, which could prop up prices further. The question remains, "Will demand be enough to spur E&P in the oil patch?"

Industrial production fell 0.8% for the month of October, the largest decline in 17 months. Factories may be reticent to expand production unless consumer demand warrants it. The trade war with China has hurt global trade in general. It has also created uncertainty about the economy. Waning industrial production and manufacturing activity will likely hamper demand for oil. Oil companies appear to be responding by cutting drilling activity. The rig count recently fell for the seventh straight week, which likely connotes a slump in E&P. This cannot be good for oil services firms like Halliburton.

Halliburton's Q3 revenue of $5.6 billion declined 6% sequentially. Its revenue in North America declined by double digits. North America represented over half of Halliburton's revenue and remained extremely important. The region was hard hit by a decline in pricing power pursuant to pressure pumping and well construction services. In response, Halliburton has been engaging in cost containment efforts to help maintain margins.

Its EBITDA of $953 million fell 2% sequentially. EBITDA margin of 17% improved by about 100 basis points versus that of Q2 2019. Its operating costs were $4.6 billion. The following chart lays out Halliburton's operating expenses in comparison to that of Schlumberger (SLB) and Baker Hughes (BKR). 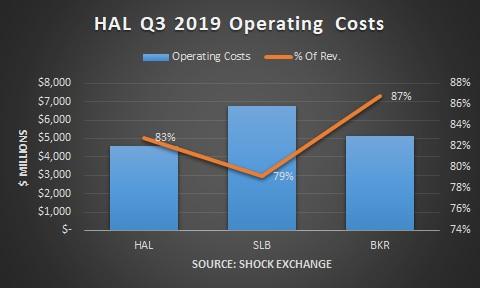 This could prove difficult. First of all, Schlumberger has more scale than Halliburton. Its $6.8 billion in quarterly revenue is about 47% more than Halliburton's. Secondly, Halliburton is already implementing cost containment efforts. The company has been cutting fixed costs for much of the year. In Q2 2019 it took a $247 million pretax charge related to severance costs and asset impairments. Its 17% EBITDA margin partially reflects management's efforts to adjust its cost structure in the face of slumping E&P. Attempts to further improve Halliburton's EBITDA margin could come at the expense of customer service levels or employee morale.

With an enterprise value of $28 billion HAL trades at 7.5x last 12 months ("LTM") EBITDA. HAL is down over 25% Y/Y, despite the rise in broader markets. The Dow Jones (DIA) is up over 15% Y/Y, yet we may be facing a corporate earnings recession. The Federal Reserve has cut interest rates and is spending tens of billions per day to add liquidity to financial markets. If Fed intervention is not enough to buoy HAL then I doubt more cost cutting will do much to spur the stock.

Oil markets may finally reflect the vagaries of the global economy, in spite of OPEC supply cuts. That sounds foreboding for HAL. Sell the stock.