Nintendo (OTCPK:NTDOY) has shown a significant turnaround in growth in the last 5 years. With further growth catalysts on the horizon, I think the stock is still fairly valued and could offer investors a return upwards of 30% in 2020-.

Nintendo is a Japanese company founded in 1963. It distributes and produces electronic entertainment products all over the world and has become a household name. It has developed some of the most successful gaming consoles (SWITCH) and game franchises such as Super SmashBros, Pokemon and Zelda.

The company has been around for years and has had to adapt its business to the latest changes in the gaming industry. We will summarize them in the following way:

Back when Nintendo was founded, its target audience would have been young boys. However, in recent years, gaming has become increasingly popular amongst older users. The target audience has changed both in age, and gender, with more females joining the global phenomenon. This is evident with the rise of professional eSports, which are played and followed mostly by adults.

Back in the day, gaming required specific and expensive hardware. As technology has progressed, the need for these machines has become less and less, to the point where nowadays, games can easily, and are mostly, played on computers. While Nintendo had success in the sales of its latest console, the Switch, it has already accepted that dedicated game consoles are not the cash making machines they once were.

Again, back in the day of dedicated gaming consoles, games would also have to be made specifically for that one device. These games usually came at a relatively steep price and could take months or even years to produce. Once the final product was released, it was done. The most successful game today, League of Legends, is the opposite of this. First of all, it is free to play, and secondly, it is constantly being updated and modified. So how does LoL make money? By allowing in-game purchases. This model of monetization has revolutionized the way we think of gaming and is a result of the change in technology. League of Legends is played on PC, which means basically anyone can play. With such a large user base, it is easy to monetize the game, even if only 10-20% of the users are spending any money.

Below we will analyze some of the metrics of Nintendo, weighing in both the good and the bad in terms of performance over the last decade.

Nintendo is a rare case of a company that is funded completely by its operations. In other words, Nintendo has 0 debt, which is a great measure of Nintendo’s profitability and ease of profit generation.

As we can see, Nintendo can more than cover its few liabilities, and with a policy of funding its operations, there is no risk of indebtedness. At this point, one would wonder if Nintendo can sustain this, and there seems to be no reason to believe otherwise.

With over $14 billion in retained earnings and 8,5 billion in cash and ST investments, we can expect that Nintendo will be able to continue funding itself completely independently.

In terms of profitability and growth, the last 5 years have shown a turnaround in both revenue and profit margins. The following chart shows in depth the trajectory of some of the most relevant metrics, including 2020 forecasts: 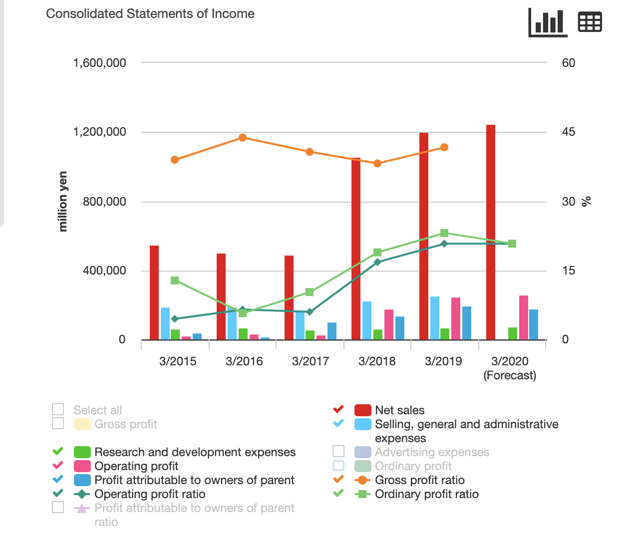 As we can see, since 2017, net sales have shot up, coinciding, not surprisingly, with the release of the Nintendo Switch. The company has also been capable of increasing its operating and net profit, by keeping a lid on SG&A. However, the following table paints only show half the picture, as it dates back to only 2015. Looking back to 2010, we can see that Nintendo is now just about recovering from its previous highs.

Indeed, back in 2010 revenues were around 15 billion, and fell to lows in 2014 of 5 billion. It is clear that Nintendo suffered from the economic slowdown and a changing landscape, but it seems like it has finally managed to adapt to the new gaming industry, which is by no means shrinking. In fact, in 2012 you could have bought a share for as little as $12, which would now be worth around $50, showing that investors have realized that Nintendo is back in the game. But can we trust Nintendo to continue this trajectory?

According to Zion Market Research, the video-game streaming industry is poised to grow at a 27% annual growth rate until 2026. Streaming video games means that no specific hardware is needed. Nintendo has already adapted to this new model, releasing in the last 5 years various games fro both PC and mobile. One of its latest games, Pokemon Rumble Rush, already uses an internal currency to allow in-game purchases. While it is true that this poses a change from Nintendo’s traditional operations, there is one very important factor we must take into account:

Nintendo owns the rights to the most popular game franchises in the world. Nintendo will forever own SuperMario and Pokemon, and the potential to monetize these franchises through mobile and PC games is huge.

The value of its intellectual property is not only potential but already evident. Earlier this year we saw the launch of Detective Pikachu, with a box office of $437.1 million. Furthermore, in spring 2020 we will also see the launch of a Nintendo theme park in Japan, coinciding with the 2020 Olympics.

And finally, next week, in collaboration with Tencent, (OTCPK: TCEHY) Nintendo will be releasing then Nintendo Switch to mainland China. While this has been known since April, we will soon see the results of this partnership

Considering all that has been said above, we can say with some safety that Nintendo is on track for good results in 2020, but how is this reflected in the valuation? A peer comparison will shine some light on the matter.

As we can see, Nintendo does trade at a very generous P/E ratio at the moment. This can be justified by its financial strength, and also the fact that the stock pays a dividend of about 1.2%. While the stock may seem overvalued on P/E, excluding Sony, it trades at below par EV/Sales, EV/EBITDA, and Price/Sales.

Given the above-mentioned growth catalysts, Nintendo could easily trade at a P/S of 6, since it is as profitable as EA and Activision, and has shown better growth in the last 5 years. Therefore, I believe a good target price for 2020 to be around $70/share, which would equate to around a 40% appreciation.

I see Nintendo as a good investment because it offers:

Nintendo offers the safety and dividend returns of a conservative utility company, with the potential of a growth company and a reasonable valuation. Worth buying in my opinion.

The Digital Trend
15.19K Followers
Author of Technically Crypto
In-depth analysis on Bitcoin, Altcoins and the technology that powers them.