PacWest Bancorp's (NASDAQ:PACW) earnings are likely to decline next year mostly due to expected pressure on net interest margin that will be worsened by the high proportion of variable loans in PACW's total loans. On the other hand, growth in earning assets is expected to somewhat soften the downward pressure on PACW's bottom-line. The market appears to have over discounted PACW's price in light of the prospects of earnings decline, as my target price implies a double digit upside from the stock's current price.

PACW is primarily located in California where the economy is resilient despite headwinds from trade tensions that especially affect the agricultural sector. The latest leading index for the state estimated by the Federal Reserve Bank of St. Louis is 2.24, meaning that decent economic expansion can be expected in the coming quarters. The Federal Reserve Bank of Philadelphia's leading index is similarly high at 1.86, as shown in the chart below. As PACW is a nationwide lender, United States' leading index has also been included.

Due to the prospects of decent economic growth I'm expecting PACW's loans portfolio to continue to expand in the coming quarters. Low interest rates will also help with credit offtake. On the other hand, some pressure can be expected from uncertainties related to trade and presidential elections.

Based on the above mentioned factors I'm forecasting PACW's loans to grow by 4.1% next year to $19.5 billion. I'm also expecting deposits to grow in line with loans. The following table summarizes my estimates for PACW's key balance sheet items. 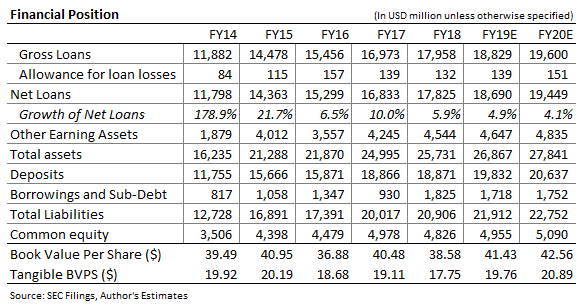 Following the three rate cuts in 2019-to date, PACW's average yield is set to fall more than funding cost, thereby squeezing net interest margin, NIM. This asset sensitivity of the balance sheet is attributable to the large proportion of variable-rate loans in total loans. As mentioned in the third quarter presentation, around 60% of PACW's loans were based on variable rates as at the end of September 2019, while 20% were hybrid and only 20% were fixed rate.

Due to the 75bps Fed funds rate cut and asset sensitivity, NIM is expected to fall in the coming quarters. According to the results of a simulation conducted by the management, NIM can decline by 6bps in the next twelve months of a 25bps interest rate decline, holding other factors constant. The results of the simulation, taken from the third quarter 10-Q filing, are presented below.

I'm assuming no further rate cuts in the remainder of 2019 or in 2020. Taking guidance from the management's interest rate sensitivity simulation results, and keeping in mind my expectation of stable interest rates, I'm expecting NIM to decline by 6bps in 4QFY19 and 5bps in 1QFY20 on linked quarter basis. The average for full year 2020 is estimated to be 18bps below the average for 2019.

Apart from net interest margin, normalization of non-interest income is also expected to pressurize PACW's bottom-line. The company booked large gain on sale of securities of $22 million in the second quarter which was not repeated in the third quarter, and is unlikely to also be repeated in the coming quarters. Anticipated equity market turmoil ahead of the elections next year might further worsen PACW's ability to book capital gains. Due to normalization, I'm expecting the company's non-interest income to decline by 8.7% year over year in 2020.

Pressure from NIM compression and lower non-interest income is expected to drag PACW's earnings in 2020. On the other hand, the bottom-line is expected to receive some relief from decent loan growth. The following table summarizes my estimates for PACW's income components.

I'm expecting PACW to continue to pay quarterly dividend of $0.6 per share through 2020, leading to dividend yield of 6.57%. Despite the anticipated earnings decline, I'm not expecting dividends to be decreased because the 2020 projected payout ratio is at 67%, which is below the range maintained from the years 2015-2017. However, some threat from capital requirements exists because PACW's capital ratios for close to minimum regulatory requirements at the end of September 2019. As mentioned in the 3QFY19 10-Q filing, PACW's Tier I capital ratio was 9.55% versus requirement of 8.50%.

Retained earnings are expected to drive PACW's equity book value next year. Implementation of the new accounting standard, Current Expected Credit Losses, CECL, is also expected to have some impact on equity. According to the third quarter presentation, CECL can increase allowances for credit losses by 0-10%. Taking this guidance, I'm expecting PACW's allowances to increase by $7 million and equity to decrease by the same amount in 1QFY20. As this amount is very low the impact on capital ratios will be negligible. I'm expecting PACW to end 2020 with book value per share of $42.6 and tangible book value per share of $20.9.

I'm using the historical price to tangible book, P/TB, multiple to value PAWC. The stock has traded at an average P/TB multiple of 1.94 in 2019 till date. Multiplying this P/TB ratio with the forecast tangible book value per share of $20.9 gives a target price of $40.5 for December 2020. This target price implies upside of 11% from PAWC's December 3, 2019 closing price. The following table shows sensitivity of the target price to P/TB multiple.

PACW's earnings are expected to decline next year mostly due to NIM compression and lower non-interest income. The market appears to have over-compensated for the prospects of earnings decline, and I think there is room for capital appreciation. Based on the implied double-digit price upside, I'm adopting a bullish rating on the stock. Overall, I think PACW is a good investment with potential for price upside and an attractive dividend yield.