Though the overall market remains lofty at fresh all-time highs, several once-popular stocks have slipped dramatically from their leadership positions and notched newly attractive valuations. Among this group is Elastic (NYSE:ESTC), the Dutch software company best known for Elasticsearch, which powers the search function within third-party applications. A perennial high-flyer since its IPO in late 2018 at just $36 per share, Elastic shares have just taken their first major tumble downward with the release of its third-quarter results, virtually wiping out the stock's year-to-date gains:

The question for investors now is: will Elastic be stuck in the penalty box for several quarters, or will it be like other SaaS companies like Docusign (DOCU) in staging a quick comeback?

In my view, the single biggest drag on Elastic's stock price - its slowdown in billings in Q2 - isn't due to any long-term sales execution issues, which have proven more difficult for several SaaS stocks like Zendesk (ZEN) and New Relic (NEWR) to surmount. Rather, Elastic's billings slippage is more of a timing issue - which management has noted on the Q3 earnings call and which many Wall Street analysts acknowledge. Elastic's slowdown in revenue growth is normal for a growing company, and beyond a push-out in a few key deals, isn't symptomatic of a longer-term decline in demand for Elastic's products. I still view Elastic as a highly differentiated infrastructure software provider which has very few clones in the software market. Its "land and expand" business model, showcased through incredibly high net expansion rates, also gives Elastic the potential to grow more profitably through its entrenched client base as it charges its users by volume of usage. The company's acquisition of endpoint security company Endgame also smartly extends its use cases and expands its TAM.

In short, the dip in Elastic shares represents a well-timed buying opportunity. At current share prices around $64, Elastic trades at a market cap of $5.13 billion. After netting off the $307.5 million of cash on its balance sheet, the company has an enterprise value of $4.82 billion.

For FY21, Wall Street analysts are expecting consensus revenues of $565.7 million, representing 36% y/y growth over FY20 expected revenues of $416.1 million (per Yahoo Finance). Considering that constant currency growth rates for Q3 just clocked in at 63% y/y for revenue and 45% y/y for billings (excluding Endgame contribution), respectively, 36% y/y growth for FY21 seems more than a little light. Regardless, using this conservative estimate for forward revenues, we arrive at a valuation of just 8.5x EV/FY21 revenues for Elastic. Without a doubt, this is the lowest multiple at which this stock has ever traded. Throughout its brief history as a public company, Elastic has consistently traded in the mid-teens; and many other mid-cap SaaS peers that are growing in the 40-50% y/y range are trading at equally lofty multiples:

It's difficult not to imagine Elastic returning to a double-digit valuation once sentiment improves (especially as I see Elastic's issues to be short-term in nature). In my view, the stock is worth at least 12x EV/FY21 revenues, implying a one-year price target of $89 and 39% upside from current levels. Stay long here and buy the dip.

Let's dive into Elastic's third-quarter results and examine the issues that investors found. The company's earnings summary is shown below: 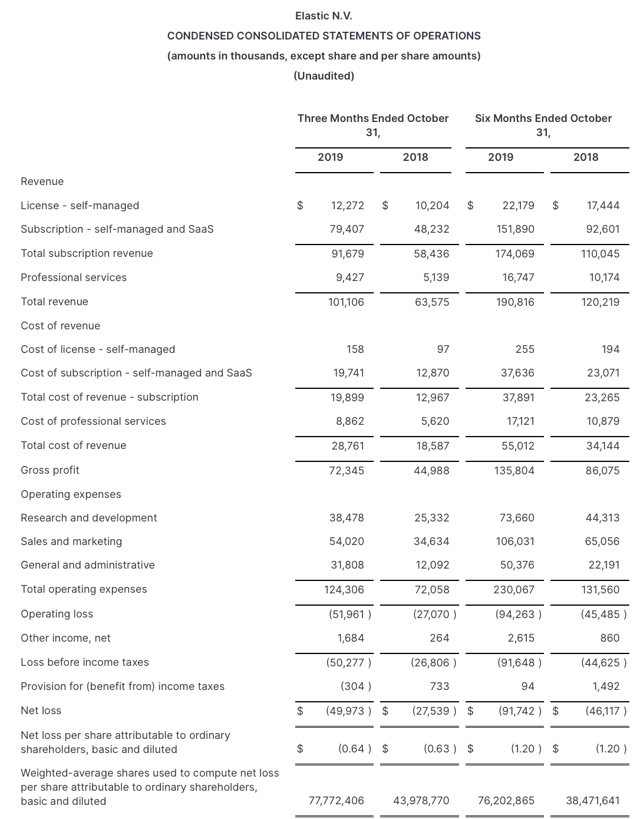 Elastic grew revenues at 59% y/y to $101.1 million, crossing the $400 million annualized revenue mark for the first time and besting Wall Street's expectations of $96.5 million (+52% y/y) by a strong seven-point margin. Despite the respectable magnitude of this quarter's beat, we do note it's smaller than in past quarters - in Q1, for example, Elastic's 58% y/y growth rate soared eleven points past Wall Street's expectations of 47% y/y growth. We note, though, that in the absence of FX movements Elastic's growth rate would have been 63% y/y - one point stronger than last quarter.

Obviously it wasn't revenue that concerned investors, but billings. As shown in the chart below, Elastic's billings grew 45% y/y on a constant currency basis to $125.3 million, decelerating eight points from last quarter's 53% y/y growth rate. The widening gap between billings and revenue growth rates are typically a forward indicator of deceleration in future revenue growth. 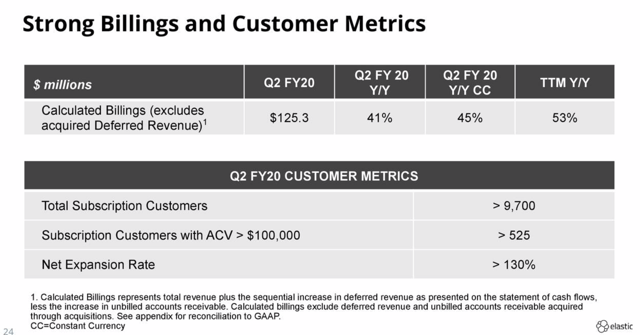 Here's why I'm less concerned about Elastic's billings slowdown, however - the company attributed the majority of the billings slide to a push-out of U.S. government deals, where red tape and bureaucracy are notorious in slowing down the deal process. Per CFO Janesh Moorjani's prepared remarks on the Q2 earnings call:

To provide a bit of geographic color, APJ was the fastest growing region followed by EMEA. Within the United States, we saw strength in some areas, but also experienced some delays in our federal government business as some deals moved out of the month of October. We remain confident about the opportunity ahead of us with the U.S. federal government as well as governments worldwide."

In my view, this is a timing issue, not a demand issue. The fact that some deals moved out of October simply means that future quarters' billings numbers will be enhanced. I see no reason to believe we've learned enough facts to determine Elastic's business is worth~20% less than what it was worth last quarter, which is what Elastic's stock price would suggest.

Further giving us confidence that Elastic is only undergoing a timing issue is the fact that its revenue guidance for Q3, at $106-$108 million, comes in ahead of Wall Street's expectations of $105.8 million. Also worth highlighting is the fact that Elastic's net expansion rate clocked in above 130%, which is one of the highest expansion rates in the software sector. Due to the fact that expansion business is a cheaper source of growth than new business (less sales dollars are needed to upsell existing customers), Elastic's success in "land-and-expand" is a huge tailwind for the company's profitability. For a company that's currently growing revenues north of 50% y/y, the company's -22% pro forma operating margin is quite reasonable. We note as well that Elastic's pro forma EPS of -$0.22 also came in significantly ahead of Wall Street's expectations of -$0.31.

There's a lot to like about Elastic at its new bargain prices. This is a company with a unique product offering and leaping growth rates, despite a near-term U.S. government deal timing issue that has hampered this quarter's billings growth. Use the dip to build up a position in this name.

Gary Alexander
23.38K Followers
Author of Daily Tech Download
Curated research on high-performing tech; winning trades closed monthly
With combined experience of covering technology companies on Wall Street and working in Silicon Valley, and serving as an outside adviser to several seed-round startups, Gary Alexander has exposure to many of the themes shaping the industry today. He has been a regular contributor on Seeking Alpha since 2017. He has been quoted in many web publications and his articles are syndicated to company pages in popular trading apps like Robinhood.
Follow

Disclosure: I am/we are long ESTC. I wrote this article myself, and it expresses my own opinions. I am not receiving compensation for it (other than from Seeking Alpha). I have no business relationship with any company whose stock is mentioned in this article.