Tapestry Inc. (NYSE:TPR) was created when Coach acquired Stuart Weitzman in 2015, and Kate Spade in 2017. The acquisition should bolster the company’s plan to build a fashion house of luxury brands.

However, critics highlighted that the company overpaid for Kate Spade as it has not reached luxury status with lower retail pricing and margins than Coach. Moreover, there is lack of clarity on how Kate Spade will be able to reverse its negative sales trend. Consequently, the market focused on these unfavorable developments and ignored Coach's solid market position in Asia and China. Going forward, Coach should lead the company’s growth as it capitalizes on a growing Chinese personal luxury market, which should offset unfavorable results from Kate Spade and Stuart Weitzman.

At current levels, TPR’s shares are attractive at 10.2X P/E – significantly lower than its 5-year historical valuation of 23.5X and average retail industry P/E of 19.5X. I believe that the undervaluation is unwarranted given TPR's favorable growth prospects and cash flow generation. Applying an 18X P/E, TPR fair value is estimated at $45.5 per share, an upside of 77%. Near term, catalysts include stepped-up shareholder returns of $700 million (~10% return at today’s prices). 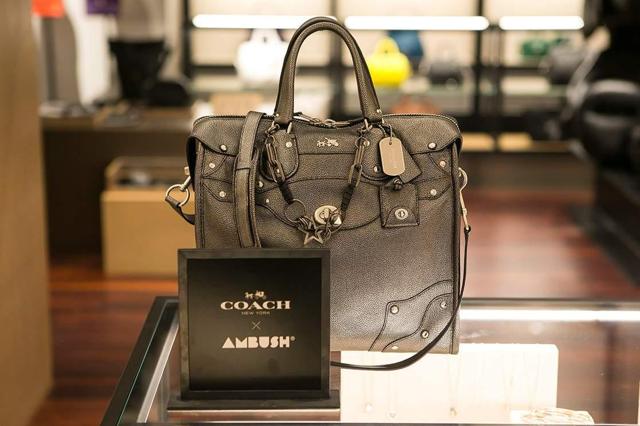 Coach's Asian Market is the Key to Growth

After several years of solid growth, Coach began to underperform due to excessive distribution and competition from other premium goods maker. Its reputation took a nosedive since the brand became associated with mid-market, mall Mom shoppers of suburban America. In 2016, the company initiated a transformation plan and got their groove back as it closed underperforming stores, realigned its inventory, re-assessed its pricing, and promoted the brand’s status. Subsequently, it acquired fashion brands namely Stuart Weitzman in 2015 and Kate Spade in 2017 with an intent to become a house of luxury brands under the Tapestry umbrella.

Critics pointed out that Tapestry overpaid for Kate Spade arguing that the brand has not reached luxury status (with lower pricing and margins than Coach) and there is marginal progress on reversing negative trends. Whereas Tapestry manages three brands, its future growth will be driven solely by Coach (71% of 2019 net revenues), a brand that has strong prospects in the Asian and Chinese market.

Based on Bain & Company Luxury Goods Worldwide Market Study, personal luxury goods will grow at an annual rate of 3% to 5% to reach €320 billion to €365 billion in 2025. From this figure, Chinese consumers are expected to capture 46% of the global market share: 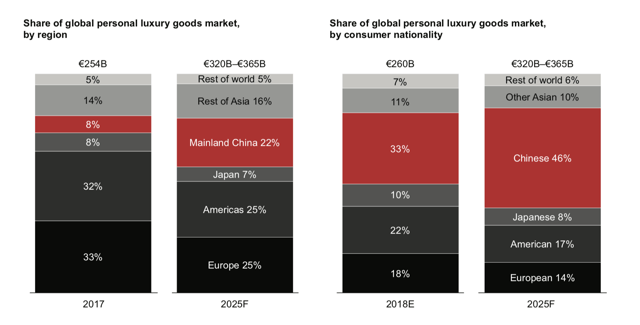 In FY 2019, Tapestry generated more than $1.6 billion in revenues from Asia, reflective of the brand’s dominant presence in the region. Over the past years, Tapestry made several initiatives to solidify its Asian business:

It is also important to highlight that Tapestry’s sales from Greater China alone have considerably grown from $30 million in 2008 to around $800 million in 2019. Underpinned by an expanding personal luxury spending in China, the Coach brand should capitalize on its brand strength to reach $1 billion in sales in 2027 (i.e., similar to the projected industry growth of 3% per year) and hence drive the company’s overall growth.

TPR’s acquisition of Kate Spade and Stuart Weitzman was aimed to complement Coach’s strong growth prospects in Asia. However, these brands were beset by various issues that require reform strategies to provide a meaningful revenue contribution to Tapestry.

There is lack of clarity on how Tapestry will reverse its negative sales trend since the previous management focused on heavy discounting and expansion of low-priced products, resulting in diminished pricing power – reflective of that Kate Spade has lower operating margins of 13.6% compared to Coach’s operating margins of 27.1% in 2019. Further, it would be difficult to turnaround the business immediately since the brand has sizable exposure to the competitive $150 to $300 bag price category.

While Tapestry is implementing a turnaround plan on Kate Spade through taking control of distribution, eliminating weaker products, and reduce discounting, Kate Spade will not be able to match Coach’s pricing power in the near term.

Meanwhile, Stuart Weitzman’s remains a marginal contributor to Tapestry’s net revenues (6% of sales in 2019). The brand is almost entirely dependent on footwear and exposed to significant fashion risk since some style falls out of fashion in a relatively short period. For 2019, Stuart Weitzman posted negative operating margins, driven by lower wholesale pricing and increased promotions. To address these issues, Tapestry is also taking greater control of the brand’s distribution and opening new stores as well.

In the 1Q FY2020 Conference Call, Tapestry’s Chief Executive Officer Jide Zeitlin acknowledged there is much work to be done on these brands:

Turning to Kate Spade. Revenue performed in line with expectations. The business realized a mid-teen decline in comparable sales, which reflected the product and merchandising challenges we’ve previously identified and are actively working to address. Kate Spade's geographic mix is also more skewed to North America than Coach, thus leaving the brand more exposed to a domestic market that is facing greater traffic and promotional challenges than many of our key international markets.

At Stuart Weitzman, sales were negatively impacted by softer wholesale demand, which offset growth in the brand’s direct business.That said, gross margin expansion resulted in an operating loss equal to [the] plan and the prior-year quarter. As we look ahead, we're maintaining our total Tapestry outlook for fiscal year '20. We understand that to meet this guidance, we need to continue to drive growth at Coach, while simultaneously improving trends from current levels at Kate Spade and Stuart Weitzman.

Our imperative is to fuel [the] desire for our brands and make investment decisions through a consumer-centric lens. We're focused on becoming more agile, continuously leveraging data and technology to increase our productivity and speed to market. These improvements will enable us to fund additional brand-building initiatives and to return capital to shareholders. To this end, we’ve commenced an in-depth comprehensive and efficient review of our business to address both near-term and long-term opportunities.

The company has traditionally been a cash cow, generating strong operating cash flows of $792 million with above-average returns on invested capital of 19%. Despite an increasingly competitive retail industry, TPR is expected to generate sustained operating cash flows.

On the other hand, the company’s financial position remains in solid footing with debt to equity of 1.15X per 1Q FY 2020 financials. With low capital requirements (less than $300 million a year), there is no reason for the company to further leverage up its balance sheet.

Due to the ongoing issues surrounding Kate Spade and Stuart Weitzman, TPR’s shares appear undervalued at 10.2X P/E (based on consensus FY 2020 EPS of $2.53) – substantially below TPR’s 5-year historical valuation of 23.5X P/E and Retail Apparel industry average P/E of 19.47X. Taking into consideration growth prospects in the Chinese market, share undervaluation is unjustified. Assuming an 18X P/E, TPR’s fair value is calculated at $45.53 per share, an upside of 77% from current levels.

On the downside, Tapestry faces the possibility that it will execute its execution plan poorly due to its inability to timely produce new and unique product lines, along with the risk that Kate Spade will continue to produce lower than expected sales trends.

Tapestry’s strategy to consolidate and grow its China and Asia business bodes well with the significant growth opportunities in the Chinese personal luxury spending market. However, the market is not buying this narrative since Kate Spade and Stuart Weitzman remain a drag on the company’s financial results. Looking ahead, TPR will capitalize on Coach’s solid brand position in Asia and China, resulting in sustained operating cash flows and a high long-term return on capital.

Magnus Investments
74 Followers
A part-time investor with a value bias. I scour markets for high-quality business offered at reasonable prices - a typical idea is a company with no significant analyst coverage but with the potential to generate sizeable free cash flows with high returns on capital - delivering multi-year gains to investors.
Follow