We took a brief hiatus from our weekly series Open Insights to update our oil thesis, recently published here, but we’re back now back to looking at the EIA’s Weekly Petroleum Status Report (“WPSR”) for the week of November 29, 2019. 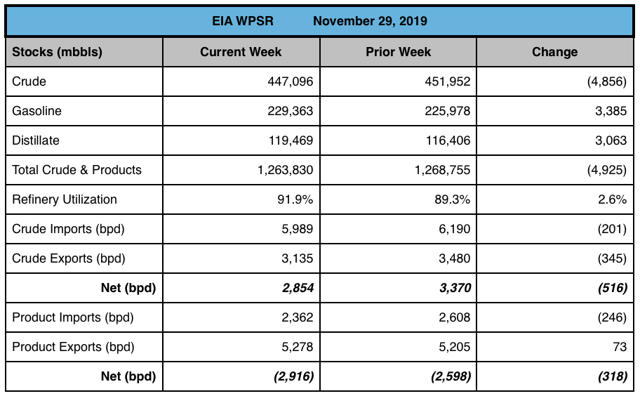 EIA reported a draw this week of 4.9M barrels, breaking a four-week string of consecutive builds. Crude exports declined less than imports, so overall net imports increased by 140K bpd. The draw was largely caused by increasing refinery throughput, rising from 89.3% to 91.9%.

Gasoline inventories increased by 3.4M barrels, whereas distillates also notched a 3.1M barrel increase. Implied demand (i.e., product supplied) increased by 155K bpd for gasoline, but fell by 481K bpd for diesel, although this is declining from a weekly high of last week. Other petroleum products (everything excluding diesel, gas and jet fuel) declined by 6.4M barrels, as propane demand ratcheted-up with the colder weather and agriculture use. 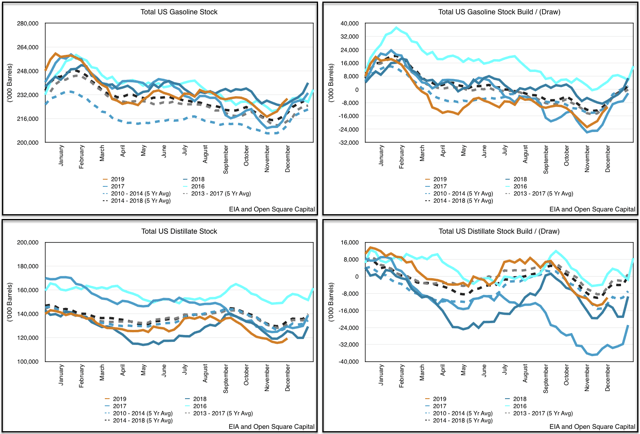 Total crude and products decreased by 4.9M barrels for the week, bullish compared to the 5-year average decline of 1.9M barrels.

As always, we'll leave you with some food for thought.

This past week wrapped up November, and this is what we’re seeing for the last week globally. For the entire month, we’ve had a total liquids draw of 25M barrels (4M from crude and 21M from products). 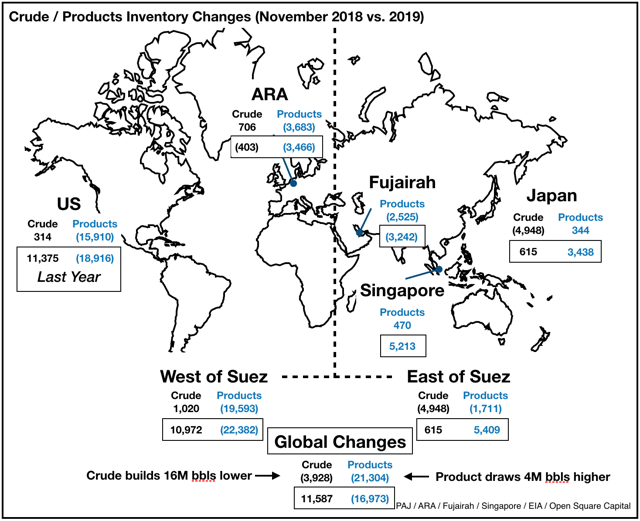 For perspective, November of last year, the total draw was 5M barrels (12M of crude build offset by 17M of products draw). Now some of the crude build from last year was caused by Saudi’s shipping additional crude to the US for political purposes, so if we measured the US solely against its own 5-year average, November would see a typical 4M total liquids draw (crude building by 3M and products drawing by 7M). Thus, bullish for the US picture, but also bullish for the non-US picture.

In short, world inventories look tight. It’s been looking that way for a few months now on the weekly indicator side, and eventually we’ll have the IEA confirm in the coming weeks for October. Nonetheless, if this trend continues and demand picks up as the global economy reengages, then it’s likely refinery margins will take a hit and force either run cuts and/or products to reprice. Given that products have also drawn heavily, it’s likely the latter that moves higher.

As always, we welcome your comments. If you would like to read more of our articles, please be sure to hit the "Follow" button above.