Glencore (GLEN:LN, OTCPK:GLCNF) is one of the world's major commodity traders. Its expertise is in mineral commodities more than anything else, that's where it got its start too. It also has a well-deserved reputation within the trade for being more aggressive than most and more willing to shoulder substantial risk, including political risk. I've not contracted with it personally but I have been active in some of the same markets.

Glencore has a reputation for being willing to enter markets and places where others would fear to tread. Alongside this is always that question of, well, what is it that makes the company so sure that its political risk is going to pay off?

It would be wrong - libellous - to then muse on whether it was acting in some manner to ensure that risks did pay off. It's also not what I think it has been doing anyway. Rather, I think it is just a shrewder judge of the likely future than most others.

Take, for example, its move into Zaire - now Democratic Republic of Congo - and the copper belt. Yes, it's entirely true that the country is in chaos, there's not been a functioning government there for decades. That makes significant investment into copper and/or cobalt there highly risky.

Or does it? For even in such chaos it is possible to enter in sufficient volume to make the investment safe. Or at least safer. Have sufficient people there, with sufficient backing, and the mines will operate on an entirely reasonable basis. And the ore bodies are so rich that this will be attractive as long as that scale can be achieved.

That is, even in that rubble of a state, go hard and go large and the risk isn't as high as it might seem. Which is what I think Glencore did do.

The Serious Fraud Office is looking into allegations of corruption concerning exactly that move. From the stock exchange announcement:

Glencore has been notified today that the Serious Fraud Office (SFO) has opened an investigation into suspicions of bribery in the conduct of business of the Glencore group.

Glencore will co-operate with the SFO investigation.

The stock dropped around 9% on the day: 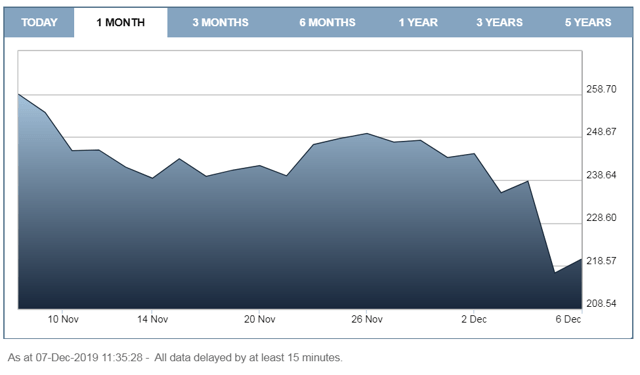 As news outlets are explaining further:

While the SFO didn’t specify what part of the business it was looking at, Bloomberg reported last year that the agency was preparing to open an investigation into Glencore and its work with Israeli billionaire Dan Gertler and former Democratic Republic of Congo President Joseph Kabila.

Gertler and Kabila have been implicated in previous British and American bribery investigations. The U.S. imposed sanctions on Gertler in 2017, saying he’d used his friendship with Kabila to corruptly build his fortune.

The idea that Kabila is as pure as the driven snow is laughable in my opinion. I have no opinion on Gertler. But upon Glencore I think it's being able to spot where its size and risk affinity will work for it rather than sealed brown envelopes and corruption which explain its success.

So, I think that a near 10% fall in the stock price on the announcement of this investigation is overdoing it.

We can approach this the other way

Imagine that Glencore does get found guilty. How much effect is that going to have on the company? This excellent deep dive into Glencore's business here at Seeking Alpha tells us - not a lot.

There are two different points here. Firstly, any charge of corruption is going to have to be proven, something I don't think it can be. But even if it is, the punishment is going to be proportionate - and Zaire just isn't that hugely important to Glencore. Thus any punishment is unlikely to be material for a company of this size.

The second point being, well, say that it is found that the mining concessions were gained through corruption. That would enable the government to try to reopen the terms upon which they were granted. But Glencore's already - from that linked piece again - closing down such concessions anyway as they're not making a decent return on capital under the current arrangements.

That is, whatever the outcome, I don't see the result as being material.

The general view within the mining industry is that Glencore has always been less risk-averse than everyone else, more aggressive in what it will take on as a project. One reason for this is its sheer scale. It is able, in Democratic Republic of Congo, to do roughly what the Belgians did when it was a colony, operate on such a scale as to produce its own peace and tranquility in which to go mining.

There has thus always been a bit of a risk premium in its share price.

Further, I can't see any outcome of this investigation that makes much of a dent in the corporation nor its ability to make money. Even the claims are over assets that aren't particularly profitable.

I thus think that the stock price drop is an over-reaction to the news. Currently Glencore is on a near 7% yield. Any further price drops from this level - as a result of this investigation - should be used as opportunities to lock in that significant yield.

The more frightened people become over this investigation the greater the opportunity to buy into Glencore at bargain prices.