In January 2019, we recommended Tricida (NASDAQ:TCDA) when it was trading near $21; after seeing positive results in an extension study to its pivotal phase 3 trial, the stock has now nearly doubled. TCDA has filed for approval of lead drug candidate veverimer targeting metabolic acidosis in CKD patients. The PDUFA is on August 22 next year under accelerated approval. The question now is, is there further upside?

The question that has vexed investors from the beginning is veverimer’s competitive difference with the non-FDA approved but widely used standard of care, which is simply baking soda or sodium bicarbonate. One aspect here is safety, where sodium bicarbonate is known to cause congestive heart failure in patients who have > 24 mEq/L of bicarbonate concentration. The risk of heart failure increased by 14% (HR, 1.14; 95% CI, 1.03-1.26; P = 0.02) per 1-mEq/L increase in serum bicarbonate level over 24 mEq/L. In patients with bicarbonate concentration higher than 32 mEq/L, mortality was found to have increased. 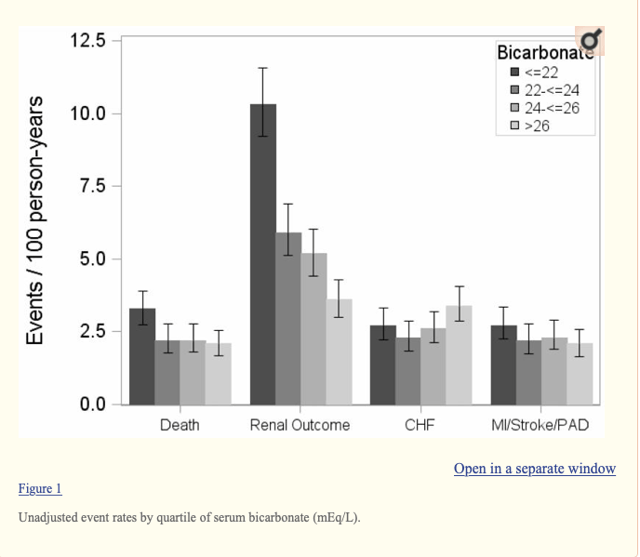 TRC101 is able to regulate serum bicarbonate level in patients in such a way that it remains between 22 and 26 mEq/L, which is the range, as we see from the above image, where neither kidney disease progression nor CHF events occur, or occur minimally. Like we also said earlier, “TRC101 does not deliver sodium or other counter-ions, which is good for CKD patients presenting with the usual comorbidities such as hypertension, cardiovascular disease, heart failure or edema, which could be increased with higher sodium in the blood.”

So, what we clearly see is that rather than being weak competition for sodium bicarbonate, TRC101 helps overcome its limitations. As such, the cheap availability of baking soda should not hold TRC101 back. Many CKD patients lose the ability to excrete acid from the body, leading to metabolic acidosis, which decreases bicarbonates in the blood. TRC101 works by binding to hydrochloric acid in the GI tract, which can then be easily excreted from the body, resulting in increase in serum bicarbonate levels. This is the way TRC101 is able to control serum bicarbonate levels in the body.

TRC101 can also be used to replace sodium bicarbonate in dialysis fluids, where it acts as the principal buffer. However, the presence of sodium could cause a number of side effects, especially in sodium-sensitive patients with CKD - these are hypercapnia, hypokalemia, ionized hypocalcemia, and QTc interval prolongation. TRC101 could help attenuate this problem.

In its latest earnings call, the company stated:

In our commercial launch, we’ll be targeting a concentrated market of 5,000 nephrologists that we believe treat the vast majority of the 600,000 patients with CKD and MA. Based on our market survey, nephrology product analogs and peer input on potential coverage decisions, we believe that we’ll achieve a peak market penetration of approximately 150,000 of these 600,000 patients resulting and U.S. peak revenue of over $2 billion per year.

TCDA has a market cap of $2 billion at present, up from less than $1 billion when we first recommended it. Given what we just discussed, and the CEO’s statement above, I think there’s potential for this stock to gain by no less than 30% before August 2020 as it approaches its PDUFA. The company has cash for at least another 8-10 quarters, and although it has just this single drug candidate in its pipeline, it is otherwise highly derisked. TCDA is a recommended "buy-and-hold" opportunity.