A few years ago, I wrote about the impressive performance of the Vanguard High Yield Corporate Fund Investor Shares (MUTF:VWEHX; also available with higher minimum/lower fees as MUTF:VWEAX). From October 1993 to March 2017, VWEHX averaged 6.4% annualized growth with a max drawdown of 30.2%. Its Sharpe ratio of 0.088 was more than twice that of the S&P's.

I decided to incorporate VWEHX into my retirement portfolio, using it as a second alpha-generating fund along with VBLTX.

Last time, I compared VWEHX to four other Vanguard funds: VFSTX (short-term bonds), VFICX (intermediate-term bonds), VWESX (long-term bonds), and VFINX (the S&P). The purpose of including these three bond funds was to show that VWEHX's Sharpe ratio placed it between the short- and intermediate-term funds. I found this very surprising; I would expect junk bonds to have decent growth potential, but not such strong risk-adjusted performance.

Fast-forward to late 2019 and we see the exact same trend continuing. Here's annualized growth, max drawdown, and Sharpe ratio for the four funds in the previous time period (left column) and since then (right column). 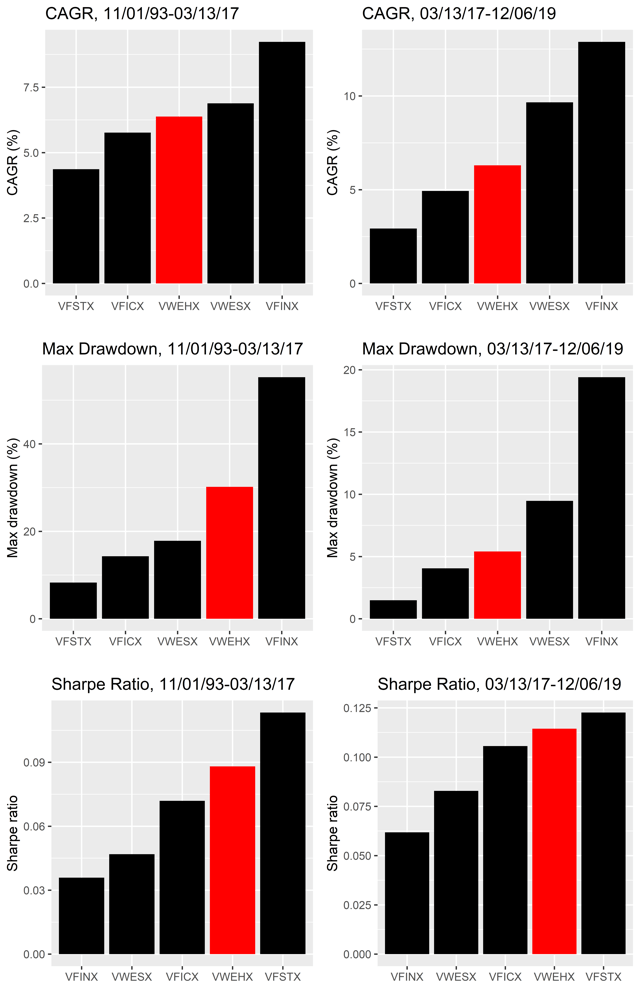 The ordering of funds is identical for the two time periods, save for one difference: for max drawdown, VWEHX overtook VWESX (better max drawdown) in the more recent time period.

VWEHX has indeed outperformed these two ETFs in all traditional metrics.

Let's see how VWEHX compares to the 10 largest high yield ETFs based on total assets according to ETFdb.com. Actually, we already looked at the top 2 (HYG and JNK), so I'll include the 3rd through 12th largest (skipping USHY, since it was introduced in October 2017). 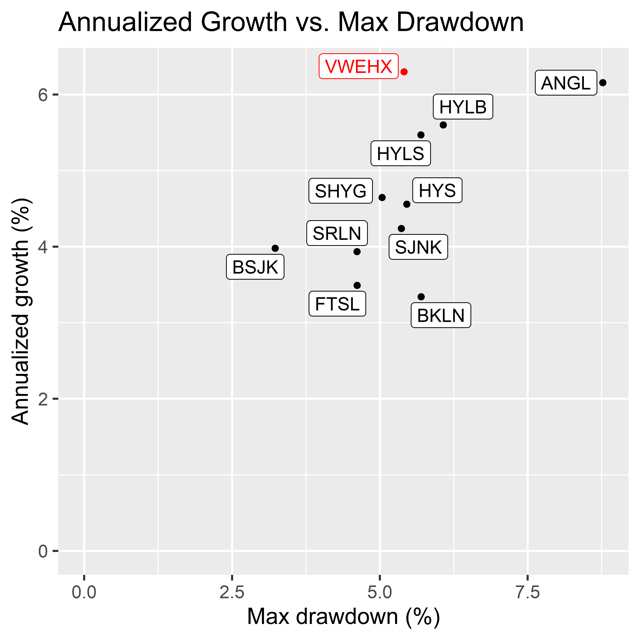 More evidence of excellent performance. Over this past 2.5-year period, VWEHX has achieved stronger growth than all 10 of these high-yield ETFs, and its max drawdown is reasonable as well.

There is one practical issue with VWEHX: it tends to be slightly positively correlated with equities. Recently, its beta has become slightly more positive, as we see here using SPY as a benchmark.

VWEHX caught my eyes back in early 2017, and since then, it's continued to have excellent performance. It has strong growth potential along with risk-adjusted returns rivaling those of short-term bonds; it consistently outperforms passive high-yield ETFs; and it's currently outperforming all of the top 10 (really 12) high-yield ETFs in terms of overall growth.

The fund won't synergize with equities as well as I'd like due to its positive beta, but I'll keep VWEHX in my own three-fund portfolio as a reliable alpha generator.

Dane Van Domelen
1.49K Followers
I am a statistician and individual investor. While my investments are mostly in low-cost index funds, I enjoy analyzing stock market trends and trying to find ways to beat the market.
Follow

Disclosure: I am/we are long VWEHX. I wrote this article myself, and it expresses my own opinions. I am not receiving compensation for it (other than from Seeking Alpha). I have no business relationship with any company whose stock is mentioned in this article.