The latest jobs data continue to demonstrate the slow but steady gain in aggregate employment since the bottom of the Great Recession in 2010. I provided greater detail on employment in a previous post. Here I add two charts, looking at trends relative to population growth and baby boomer retirement, in employment levels corrected for swings in those working (involuntary) short hours. We are now above pre-Great-Recession levels of employment. The second looks at unemployment duration. Short-term unemployment is now at a low level. However, while down, long-term unemployment remains stubbornly high, reflecting the local geographic employment challenges that stem from structural shifts in the economy. I live on the edge of one such region, the Appalachia mountain region. (See for example this Bloomberg article on West Virginia.) 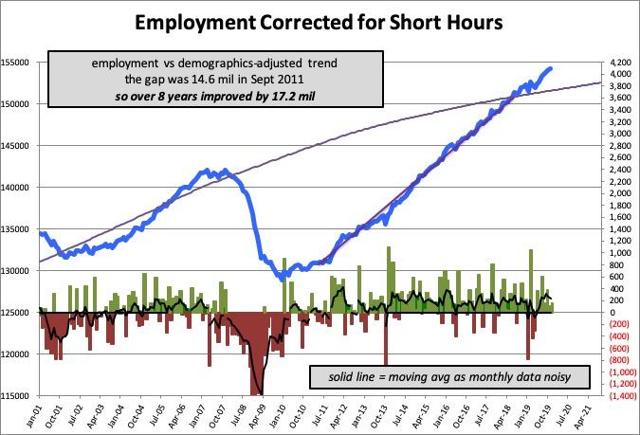 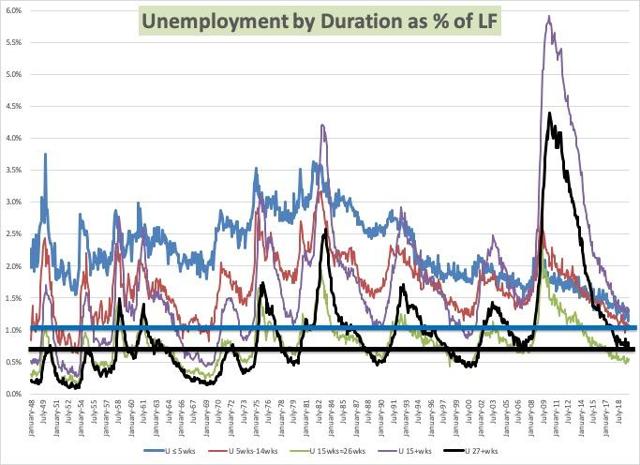 We need to separate what happens in the short-run (up to 3 years) from long-run trends. Investors (as opposed to speculators) should focus more on the latter than the former.

What we have is the long-term secular decline in growth rates. That reflects three components, as nominal yields should equal inflation plus real growth, plus a risk premium. 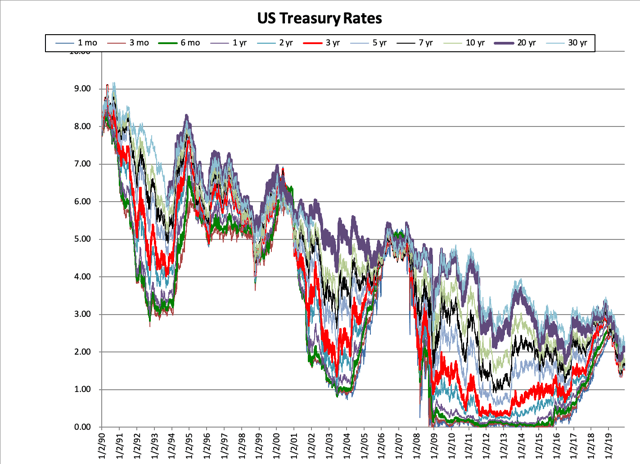 Rates imply that investors believe that inflation will remain low for the foreseeable future. As a result, there is a little downward risk to bonds. (Since nominal interest rates are low, there is no upside potential.) Thus the risk premium for holding long-term bonds is vanishingly small, implying in a flat yield curve. Is that really credible? Well, I cannot see 20 years into the future, but neither at my age do I have a 20-year investment horizon. So perhaps the holders of long-term bonds are projecting today's low inflation out 5 years, and expect to have exited their positions before any unpleasant surprises might arise.

Then there is the real component. Going back to the seminal 1957 calculations of the Nobel Laureate Robert Solow, this should reflect a combination of labor force growth, capital investment and improvements in productivity. (For those who want an extended treatment, the Wikipedia entry on economic growth is pretty good.)

In the graph below I tweak the data by calculating the implied future returns to 1-year Treasuries, calculated for example by looking at the difference between rates on a 4-year bond and on a 5-year bond. This shows consistent, low expected future interest rates. This is another way of presenting a flat yield curve. But it also shows the same long-term decline in rates, despite volatility in short-term rates. 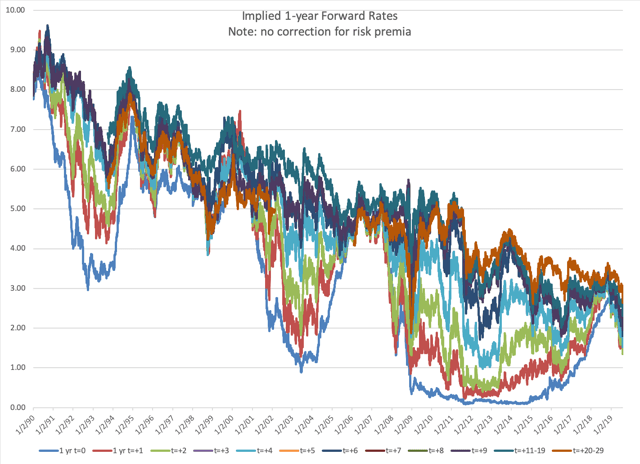 The latest data show US fertility well below replacement levels (for an overview, see the Pew Research Center and the Center for Disease Control Vital Statistics reports), and since the onset of the Great Recession in 2007, that is no longer offset by high-levels of immigration. Still, we have a relatively young population, so modest growth will continue for decades, but due to retirements, the net change will be slower. (The total population of East Asia will fall from 2025, and (despite continued population growth in northern India, Pakistan and the Philippines), past fertility patterns mean that population of Eurasia as a whole, South and Central America, and northern Africa will peak by 2050. Sub-Saharan Africa is the remaining region with above-replacement fertility. Younger investors might want to contemplate slowly accumulating a portfolio of stocks of companies with a focus on that region, but that's still a very small slice of the global economy.

For the sake of brevity, I won't detail this component. Suffice it to say that, in mature economies, it makes only a modest contribution due to diminishing returns. In China, returns may, in fact, be negative, due to extremely high levels of investment over the past decade. South Asia could potentially benefit from investment in infrastructure and education, but institutions today are not delivering rapid improvements. In the future, the only remaining growth pole for the global economy will be Sub-Saharan Africa, but as with population growth, those economies remain too small to matter to returns on diversified portfolios.

The other key driver - the key driver - is improvements in productivity. Those have been falling, and today are very low. Hence so are real (ex-inflation) bond rates.

This may seem counter-intuitive, giving the hype about Silicon Valley and disruption, but when phrased properly, it should be consistent with common sense. Let me give one example.

My first PC, purchased in 1983, was slow enough that it could not always keep up with the speed of my typing, and editing long documents entailed minutes of waiting to jump the start to the end. A decade later that was no longer true. Since then I appreciate fancier graphics and the speed with which I can manipulate large spreadsheets. (The accompanying graphs are the output of over 5 thousand rows of data.) There has also been a remarkable increase in the ability to access economic data online, helped by most countries adding English-language indexing for key items. That process was already pretty far along ten years ago, and now I can even access historical data series for the economies I follow.

Little of what I do today was impossible 20 years ago, and for a decade I've not had to manually enter data (though sometimes it's still faster that way). If anything, recent improvements in convenience tempt me to do more variations of any analysis and to spend more time making graphs handsome. In sum, the fundamental technologies that affect my productivity as an economist have ceased generating incremental benefits.

I would argue the same is true in the corporate world, where gains come from changing the organization of work, not speeding individual tasks. That's a slow process and is largely complete. Big data doesn't change that. If anything, it results in a prisoner's dilemma, where companies spend more money developing focused marketing, but because their rivals are doing the same, no one sees net benefits. (For a pointed analysis of the new world of marketing, I highly recommend reading the translation of a Dutch article from De Correspondent, "The new dot com bubble is here: it's called online advertising.")

So, in line with the arguments of Robert Gordon, we are well into an era of permanently slower growth. That's true not just for the US economy, but for the global economy. Low interest rates are here to stay. 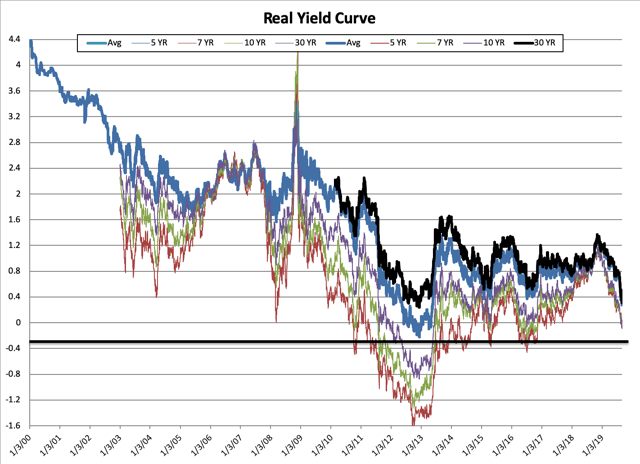 First and foremost, don't be greedy! Anyone touting double-digit returns is either peddling snake medicine or is proposing investments in narrowly focused, risky (if not highly speculative) assets. Extra returns are always nice, but it's simply not realistic to expect the returns for broad portfolios that our parents' generation enjoyed. For example, now that the Soros Fund is in it for the long haul (giving away money on a sustainable basis), it's shifted to a safer investment strategy. The result? Backing out annual rates from data on the Soros Fund reported by Bloomberg and others, returns of about 5% a year would be fine.

Second, low interest rates complicate analysis. The core for any fundamental approach to investment is discounted cash flow, to validate whether current asset prices are sensible, combined with the grunt work of evaluating management capabilities and strategic soundness of individual companies. I see enough internal (confidential) materials for automotive suppliers to believe I can evaluate the latter components. But I'm not confident of my judgement on whether current stock prices are sensible. That is, I can distinguish good companies from bad, but not good investments from bad. I stick to broad portfolios with low management fees.

Why am I not confident about analyzing prices, except for extreme cases? I have a list of companies that I believe have no viable strategy to generate a profit but am not about to venture into "short" strategies. That is, I know they will fail, but I'm not willing to bet that I know when they will fail. But back to the more fundamental challenge. A simple table should suffice.

Any fundamental analysis rests on projecting future profits, or ideally, cash flow. To do so requires discounting future returns. But how far out should one project? In the old days of high interest rates, that still mattered. With low interest rates, it really matters: small changes in assumptions produce large swings in the bottom line. Here I compare returns from extending the analysis from 5 to 6 years and (details not shown) from 5 to 10 years.

At higher interest rates, adding a year swayed the bottom line. Adding 5 years has a pretty big effect. At low interest rates, adding a year results in a much bigger bottom line; adding 5 years produces qualitatively different results. Projecting future returns has always been a combination of experience and art. Today, though, it's become magic; the recent Adam Jonas analysis of Tesla is a case in point. I don't believe in magic.

Today neither big swings in rates, nor rates much below inflation, are possible. Quantitative easing has only a very indirect effect on economic activity. Japan's twenty years of QE has failed to produce either growth or inflation. The US will prove no different.

Again, the next recession will hurt.

Today's low interest rates will persist. Investors should pare their expectations of portfolio returns accordingly. This is true not just for the US, but for the global economy. In addition, such rates undermine analytic approaches to valuing stocks. It almost begs analysts to tout high target prices. Caveat emptor: Be cautious!!

Mike Smitka
216 Followers
I'm a retired academic economist. Over the decades I have focused on research on the auto industry and on the Japanese economy. But I was also a banker and worked in factories, and for the past 27 years have visited suppliers for business case and engineering presentations on innovations, as a judge for the Automotive News PACE awards. As such, I've visited about 50 suppliers, in Korea, Japan, the US, Canada and France. (I've visited another 50 or so via other activities.) I'm also on the steering committee of the GERPISA consortium of auto industry researchers, and was on the committee planning their annual global conference in Detroit, which was replaced by a virtual conference. I am active in the Industry Studies Association. I'm the co-author of Smitka and Warrian (2017), A Profile of the Global Auto Industry: Innovation and Dynamics, now available via Amazon as an inexpensive eBook.I first lived in Tokyo in 1975, after graduating from Harvard with a degree in East Asian Studies. My econ PhD is from Yale; the Nobel Laureate Oliver Williamson was my dissertation chair. I've spent 7 years in Japan, and have spent 2 months or more in China, Korea, Germany and the Philippines. I read, write and speak Japanese, and read German and Chinese.My current research interests are technology in the automotive supply chain, and the geography of the Chinese industry. My investing is passive, via my university's TIAA retirement plan.
Follow