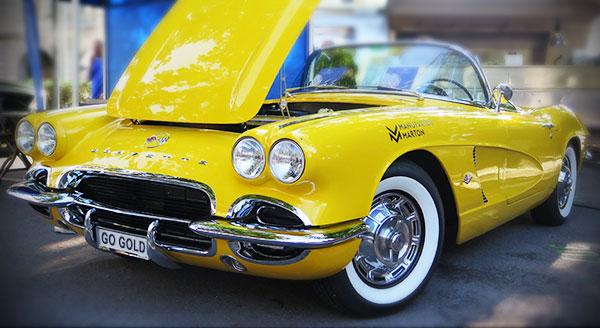 Gold closed down as much as 1.21 percent Friday on a blowout jobs report that seemed to alleviate investor fears of an impending economic slowdown. The U.S. added as many as 266,000 jobs in November, beating expectations of 180,000, while the unemployment rate ticked down to a 50-year low of 3.5 percent.

The yellow metal remains on sound footing, though, and over the next 12 to 24 months, I see its price advancing further on strong fundamentals. Mean reversion, in particular, is the theme I believe investors should be focused on in 2020 and beyond.

This was the message shared by Bloomberg Intelligence commodity strategist Mike McGlone in a note to investors last week.

The chart below illustrates the 10-year rate of change for gold, the S&P 500 and U.S. trade-weighted dollar. In other words, it shows you how much each asset class has changed from a decade earlier.

As McGlone points out, both the stock market and U.S. dollar have recently increased at their fastest pace since the beginning of the millennium, whereas gold’s rate of change has slumped after hitting its all-time high of $1,900 an ounce in 2011. The law of mean reversion suggests a rerating could occur in the early 2020s. 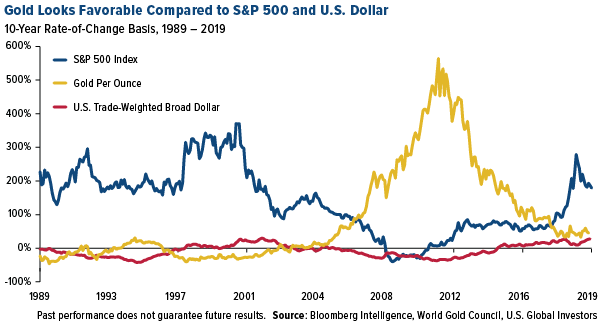 “The unsustainability of these trends in the third decade is a primary support factor for the dollar price of gold,” McGlone writes.

“Unless the greenback and U.S. stocks are embarking on a new higher plateau,” he adds, “dollar-denominated gold is poised to take the all-time new highs baton.”

Here’s another way to look at it. The left chart below shows the stock market priced in ounces of gold, while the right chart shows the market priced in gold miners, as measured by the NYSE Arca Gold Miners Index. Both bullion and miners are currently below their mean, indicating they’re undervalued relative to the market. For mean reversion to take place, either gold will need to soar to new all-time highs or beyond, or stocks must tumble. In both cases, holding gold, I believe, is rational and prudent.

Royalty of the Precious Metal Industry

There are other ways to get exposure to gold than coins and bars, of course. One of the best ways to “supercharge” your gold position, I believe, is with precious metal royalty and streaming companies. Think Franco-Nevada (FNV), Wheaton Precious Metals (WPM), Royal Gold (RGLD) and others.

Take a look below. The world’s largest royalty and streaming company with a market cap of $25 billion, Franco-Nevada has outperformed gold bullion and gold equities in both bull markets and bear markets. Investors who like gold do so because they understand that the yellow metal can limit losses in their equity position and reduce volatility. Adding a royalty company such as Franco-Nevada to the mix can be like injecting nitro into your souped-up sports car.

This is because while they enjoy a lot of the upside potential when gold prices are rising, royalty companies share very little of the downside potential with producers and explorers when the metal is in decline. Royalty companies are better insulated from bear markets because they have a diversity of high-quality active mines in their portfolio.

What’s more, they’re not the ones spending money to develop a project. They simply put up the capital, and in exchange they enjoy either a royalty on whatever the miner produces or rights to a stream of metal supply at a fixed, lower-than-average cost.

It’s a win-win for the miner and royalty company, a win-win-win if you also include the investor.

To give you an idea of just how profitable royalty companies can be, look at the chart below, courtesy of Katusa Research. What you see is each company’s net income, or profit, per employee. Some of the world’s most recognizable names are highly profitable, generating around half a million dollars or more per employee after expenses. And then there’s Franco-Nevada, which makes approximately $3.5 million per employee, or seven times Facebook’s net income. It’s in a league all its own.

And it’s not alone. If Royal Gold were in the S&P 500, it would rank second in revenue per employee at $18.4 million, following only Host Hotels & Resorts, which generated an incredible $30.2 million per employee in fiscal year 2018.

I often recommend the 10 Percent Golden Rule, with 5 percent in physical gold and the other 5 percent in gold equities. But to supercharge your portfolio, I would strongly consider royalty and streaming companies.

Some links above may be directed to third-party websites. U.S. Global Investors does not endorse all information supplied by these websites and is not responsible for their content. All opinions expressed and data provided are subject to change without notice. Some of these opinions may not be appropriate to every investor.

The S&P 500 Stock Index is a widely recognized capitalization-weighted index of 500 common stock prices in U.S. companies. The NYSE Arca Gold Miners Index is a modified market capitalization weighted index comprised of publicly traded companies involved primarily in the mining for gold and silver. The trade-weighted US dollar index, also known as the broad index, is a measure of the value of the United States dollar relative to other world currencies.

Holdings may change daily. Holdings are reported as of the most recent quarter-end. The following securities mentioned in the article were held by one or more accounts managed by U.S. Global Investors as of (09/30/2019): BHP Group Ltd., Franco-Nevada Corp., Wheaton Precious Metals Corp., Royal Gold Inc., Chevron Corp., Newmont Goldcorp Corp.

Disclosure: I am/we are long BHP, FNV, WPM, RGLD, CVX, NEM. I wrote this article myself, and it expresses my own opinions. I am not receiving compensation for it. I have no business relationship with any company whose stock is mentioned in this article.