Author's note: This article was released to CEF/ETF Income Laboratory members on November 18, 2019.

Aberdeen Income Credit Strategies Fund [NYSE: ACP] (the "Fund"), a closed-end fund, announced today the successful completion of its transferable rights offering (the "Offer"). The Offer commenced on October 16, 2019 and expired on November 13, 2019 (the "Expiration Date").

The Offer entitled rights holders to subscribe for up to an aggregate of 4,358,024 of the Fund's common shares of beneficial interest, par value $0.001 per share ("Common Shares"). The final subscription price was $10.17 per Common Share and was determined based upon a formula equal to 90% of the average of the last reported sales price of a Common Share on the New York Stock Exchange on the Expiration Date and each of the four (4) preceding trading days. The Offer was over-subscribed. The gross proceeds of the Offer are expected to be approximately $44.3 million. The Common Shares subscribed for will be issued after completion of the pro rata allocation of the over-subscription shares and receipt of all shareholder payments. The Common Shares are expected to be issued on or about November 19, 2019.

ACP's was a 3-for-1 transferable rights offering with a relatively dilutive formula, with the subscription price being the higher of 82% of NAV or 90% of the market price. The latter condition turned out to be the higher value, giving a subscription price of $10.17, a discount of -10.16% to closing price on expiry.

How dilutive was it?

We also know that the fund will receive gross proceeds of $44.3 million, which will boost its net assets from $153.9 million to $198.2 million, an increase of 29%. However, the actual share count outstanding will increase by 4.36 million, from 13.07 million to 17.43 million, a 33% increase. This is the maximum allowable share count increase for a 3-for-1 offering, so the managers will have been quite pleased.

However, how about for the common shareholder? The astute among you will have already realized that dilution would take place as the share count increased more than the net assets in percentage terms. Interestingly, ACP appears to have updated its post-dilution NAV already on the day of announcement, rather than when the new shares are issued (which would be November 19, 2019 according to the press release). We can see this because there is a steep drop of around -4.6% in the NAV going from 11/13/2019 to 11/14/2019, which I believe must be due to the presence of the new shares.

This means I don't need to remind members that the reported discount is underestimated (too wide) due to the impending shares to be issued and give my estimate of the current discount. ACP is showing a discount of -3.82% currently, up from -8.42% the day before the rights offering ended. Usually, it takes a while for the new NAV to be updated so there is a period of time where the fund appears to be cheaper than it actually is, for the reason I explained above.

You can see this clearly in the chart below. Notice the discount suddenly narrows as the NAV takes a hit, even while the price holds relatively steady. 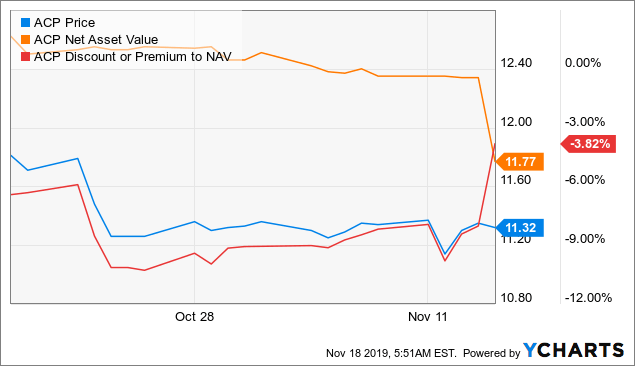 Our recommendation to sidestep the RO worked, again

Finally, let's do a quick calculation on whether our advice to sidestep the rights offering was profitable or not. As we recommended to our members shortly after the offering was announced in "ACP Rights Offering: Suggest To Sidestep If You Own The Fund":

I would sell ACP now if I owned it, and consider buying back later after the rights offering completes.

But how about subscribing for new shares at a discount? Since this was a 3-for-1 offering, you could, however, have subscribed for 100 new shares of ACP at the subscription price of $10.17, and assuming you could sell them all at the expiry price of $11.32, you'd offset the loss by $115, meaning that the actual loss would have been -$125 (-3.4%) instead. Note that this exceeds the NAV drop of -0.9% over the same time period, as well as the opportunity cost of foregone dividends from ACP (but in reality, you could have put the funds elsewhere to earn a similar return during this time frame). So overall, our recommendation to sell funds that announce right offerings has been proven to be correct, once again.

A member pointed out to me that they didn't mind holding through the rights offering and subscribing for more new shares, since they were mainly a buy-and-hold investor. My response was that's perfectly fine! But just like how our "compounding income on steroids" strategy can significantly outperform buy-and-hold with only one trade or two a month, it seems to me that taking the opportunity to generate 3% alpha on your investment with a few clicks of the mouse (sell now and rebuy later) is worth it given that that is the pattern that we have observed for the vast majority of rights offerings in the past.

For example, here is the total return performance of ACP compared to two high-yield CEF peers, the Western Asset High Yield Defined Opportunity Fund (HYI) and the PGIM High Yield Bond Fund (ISD) which we own in our portfolios. Following our recommendation would have achieved a substantial amount of alpha in only short period of time. Members would now have the ability to switch back to ACP and gain a significant amount of new shares "for free" should they desire.

Missed avoiding the big drop in ACP? Our members have our analysis of fast-moving CEF events as soon as they are released.

Closed-end funds news and recommendations are now exclusive to members of CEF/ETF Income Laboratory. We also manage market-beating closed-end fund (CEF) and exchange-traded fund (ETF) portfolios targeting safe and reliable ~8% yields to make income investing easy for you. Check out what our members have to say about our service.

Disclosure: I am/we are long THE PREMIUM PORTFOLIOS. I wrote this article myself, and it expresses my own opinions. I am not receiving compensation for it (other than from Seeking Alpha). I have no business relationship with any company whose stock is mentioned in this article.