The outlook for soybeans, as the title suggests, will mostly be dependent on how trade talks progress, as has been the case since early 2018. Any deal which sees tariffs on US soybeans removed would be constructive for CBOT prices, particularly with a somewhat tighter supply picture

It has been an eventful year for the soybean market. The toing and froing of trade talks has whipsawed soybean prices, with prices coming under pressure earlier in the year when trade talks broke down only to rally following a very wet spring delaying soybean plantings in the US. September saw renewed pressure on CBOT soybeans, with China retaliating to further US tariffs, by increasing them on US soybeans from 20% to 30%. However, Chinese buyers have returned to the market for US beans more recently, with the Chinese government providing tariff waivers. There are media reports, however, that these quotas are now fully utilised and it is unlikely that further waivers will be issued until a trade deal or at least further progress is made.

Right now, it does seem that trade talks are at a key juncture. Failure to come to a deal by 15th December would likely see the US impose further tariffs. If that's the case, a deal would appear to be somewhat further away, and that could have an impact on US soybean planting in 2020.

The waivers provided over the latter part of 2019 have seen flows from the US to China pick up once again, with at least 10mt worth of tariff waivers provided. In the 2019/20 marketing year, soybean export sales to China have totalled 5.56mt so far. This is up significantly from just 271kt at the same stage last year. That said, it still falls short of the almost 15mt seen over the same period in 2017/18, prior, of course, to the start of the trade war.

While tariffs have had an impact on flows, another factor which has weighed on total Chinese soybean demand is African Swine Fever, with the mass culling of swines reducing demand for soybean in feed. Soybean imports into China over the first ten months of this year totalled 70.8mt, down 8% YoY. However, the demand outlook does look more positive for the year ahead; while pork prices in China are still significantly above historical levels, they do appear to have peaked. That suggests we are starting to see an improvement in pork's domestic supply picture which should be supportive for soybean imports over 2020.

Looking at supply, expectation for the US soybean crop in the 2019/20 season is that output will total 3.55b bushels, which is down 20% YoY. There are two factors which have driven output lower: Firstly, with China largely becoming absent as a buyer, US farmers reduced the planted soybean area, choosing to increase corn plantings instead. The USDA estimates that US soybean plantings fell a little more than 14% this year. Secondly, yields have been hit as a result of the very wet planting season, with them estimated to be 7.3% lower YoY.

The longer the trade uncertainty lasts, the more likely it will have an impact on planting decisions for US farmers in 2020. If we enter the planting season, and there are still few signs of a deal, we are likely to see a further shift towards corn at the expense of soybeans, with farmers not wanting to take the risk of being unable to sell their crop. Looking at the soybean/corn ratio at the moment suggests that farmers should plant more corn for the 2020/21 season.

Turning to South America, and the region continues to produce near-record levels. For the upcoming 2019/20 harvest, Brazil is expected to produce a record 120.86mt of soybeans, up from 115mt in 2018/19. This stronger supply along with a weaker BRL should mean that Brazilian soybeans remain competitive to export markets. While any lifting of tariffs on US soybeans would likely mean we see weakness in Brazilian cash values.

In Argentina, there is growing uncertainty, following this year’s general election. Business-friendly Mauricio Macri was voted out of power, with Alberto Fernandez from the PJ party taking over, and whose running mate was Cristina Fernandez de Kirchner. The risk is that we see increased intervention from the new government (like when Kirchner was in power), and subsequently the potential exists for increased export taxes on agricultural products. Given the worries surrounding this, there has reportedly been increased selling from farmers in the country trying to beat any tax increase. Taking such action will have an impact on Argentina’s competitiveness to export markets.

Finally, the USDA estimates that US soybean ending stocks will total 475m bushels in 2019/20, down from 913m bushels the season before, while this is a significant decrease YoY, it is still well above the 13/14 -17/18 average ending stocks. Meanwhile, global ending stocks in 2019/20 are forecast to total a little over 95mt, down from almost 110mt last year. Tightening stocks should provide support to prices moving forward; however, trade developments are likely to trump fundamentals in the short term. 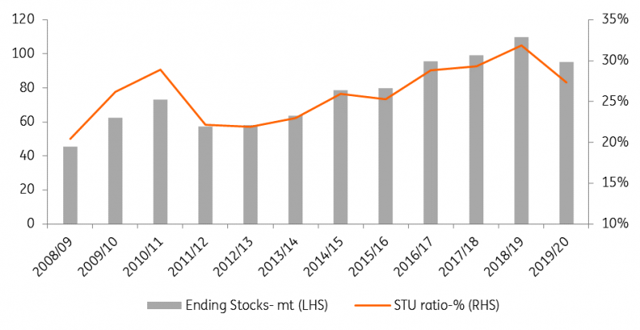 ING Economic and Financial Analysis
2.16K Followers
From Trump to trade, FX to Brexit, ING’s global economists have it covered. Go to ING.com/THINK to stay a step ahead. We’re sorry we can’t reply to individuals' comments.Content disclaimer: The information in the publication is not an investment recommendation and it is not investment, legal or tax advice or an offer or solicitation to purchase or sell any financial instrument.This publication has been prepared by ING solely for information purposes without regard to any particular user's investment objectives, financial situation, or means. For our full disclaimer please click here.
Follow