Scenario analysis - initial GBP reaction over one to three days unlikely to be long-lasting, as Brexit is seen as a largely domestic event.

GBP price action after the election will be asymmetric; less-pronounced gains on a market-friendly outcome vs. more meaningful losses on a non-market friendly outcome. A Conservative party majority should send EUR/GBP to 0.82/0.83 within a day. A hung parliament should lead to EUR/GBP spiking to 0.87. The asymmetry applies to spillovers into other G10 FX

Investors are awaiting the outcome of the UK general election (this Thursday), and the market is currently partly pricing a Conservative party victory. EUR/GBP is trading below 0.8500 (closing below this level for the first time since May 2017), and our short-term financial fair value model suggests a more than 2% positive Brexit resolution premium currently priced into GBP (Fig 1).The short GBP speculative position has been trimmed (currently 13% of open interest vs. close to 40% in mid-September - Fig. 2).

The EUR/GBP implied volatility term structure shows a heavily inverted curve, reflecting the anticipated two-way price action after the vote - either non-negligible appreciation or a meaningful depreciation. Indeed, EUR/GBP and GBP/USD breakevens point to a non-negligible and rather volatile post-election sterling reaction, at 140pips and 190pips, respectively. 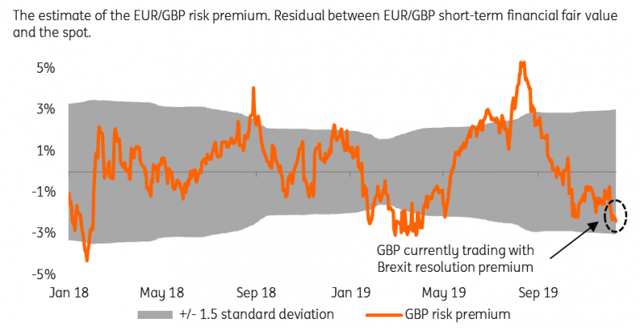 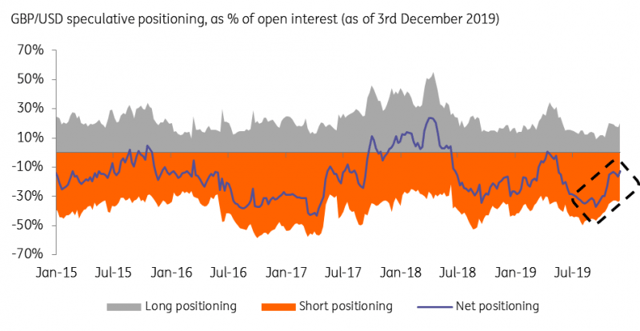 In Figure 3, we present an updated scenario analysis (initial GBP reaction over one to three days) reflecting the latest spot levels, market expectations as well as the parties manifestos (which were not known when we published our previous scenario analysis). 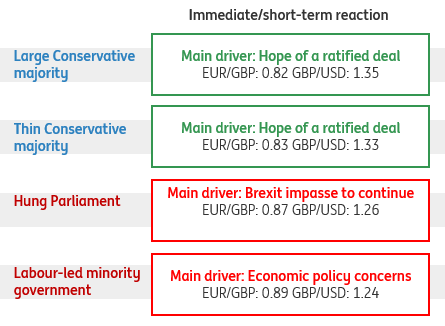 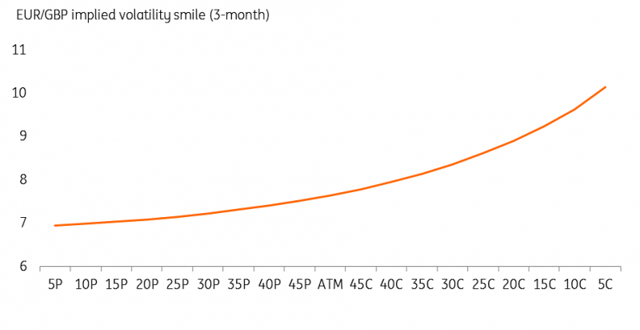 Spillover into other G10 FX: Also asymmetric, but unlikely to last long

In terms of spillover into the global FX space, there are two things to note. First, it is unlikely to be long-lasting, as Brexit is seen as a largely domestic event. Second, it's likely to be asymmetric as well, with a muted reaction on a market-friendly outcome (as this is expected) and a more pronounced reaction if the Conservative Party fails to achieve a majority or the election results in a hung parliament (as this would be a surprise, based on the latest polls and market pricing). 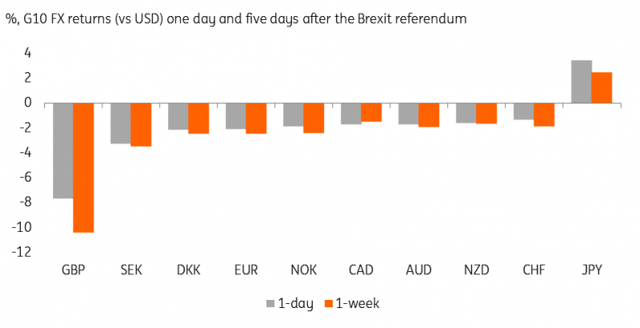 Figure 5 shows the G10 FX reaction vs. the US dollar after the 2016 Brexit referendum (the result was unexpected back then and not seen as market-friendly). The Japanese yen and US dollar outperformed, with the European FX segment coming under pressure. Of course, GBP was the prime casualty. As the same Figure 5 shows, the bulk of the reaction came on the day (of the referendum result), with one-week price action not dissimilar to the one-day price action. In contrast, after the 2014 Scottish referendum (when the outcome was in line with expectations and market-friendly), the reaction was far more muted (Figure 6).

Figure 6: ... as opposed to more muted reaction after the Scottish referendum 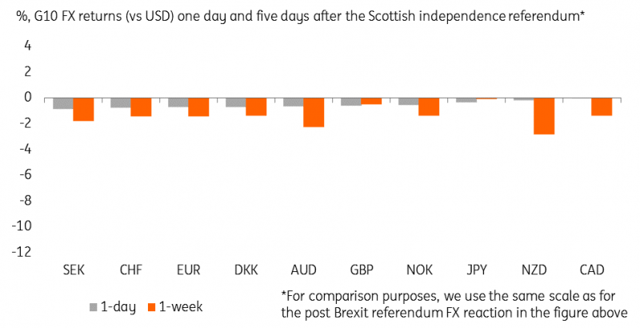 It's been a while since the UK was led by a government backed by a working majority. The last time we experienced this in the UK was the Conservative-Lib Dem coalition government of 2010-2015. Ever since Theresa May’s ill-fated general election in June 2017, the government majority and GBP have been sinking (Figure 7).

Typically, governments backed by small majorities have seen GBP underperform over the last 40 years. Weak majorities mean louder voices for the backbenchers and limited room for manoeuvre - e.g., for the governments of John Major and David Cameron. Large majorities, including those for Tony Blair’s two terms, have been welcomed by GBP.

Certainly GBP seems to be enjoying a "buy the rumour" rally on an expected Conservative majority in Thursday’s election. GBP could rally further if the Conservatives somehow deliver a 50+ seat majority.

We suspect the market would be less enamoured with a (however unlikely) sizable Labour majority this time around. Corbyn’s policy are diametrically opposed to those of the Blair government, where Chancellor Gordon Brown gave the Bank of England independence. Corbyn’s plans for massive redistributive tax changes and greater control of the private sector would likely see GBP hit hard should Labour enjoy a big win. 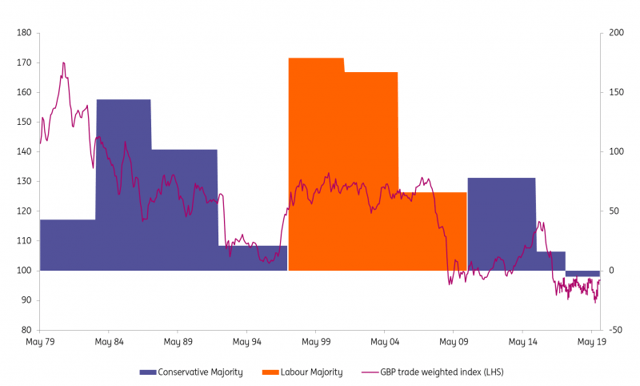 Follow ING Economic and Financial Analysis and get email alerts
+
Add a comment
Disagree with this article? Submit your own.
To report a factual error in this article, click here.
Your feedback matters to us!