Liquidity in the market is about to tighten significantly as we approach year-end, which could generate another volatility spike in the market despite the Fed’s interventions.

We think it would be more cautious to hold risk-off currencies such as the US dollar or the Japanese yen this month.

Even latest pools continue to give the Tories a nationwide lead, GBP longs could experience a sharp drawdown as a hung parliament cannot be completely ruled out.

The single currency also remains vulnerable in the short run, therefore we would suggest for long-term EURUSD bulls to wait for lower levels to buy the pair on dips.

US: In a recent note from Credit Suisse, Zoltan Pozsar writes that the liquidity in the market is about to tighten significantly as we approach year-end, which could generate another volatility spike in the market despite the Fed's interventions. Since the start of the QT in late 2017, US banks have shifted from owning reserves to collateral (mostly US Treasuries), leaving them dangerously low on reserves (For instance, JPMorgan spent more than $350bn on excess reserves on collateral in the past two years). We previously saw that the level of excess reserves in the system tend to have a negative relationship with the Fed Funds rate (figure 1, left frame).

As a result, the Fed has started to increase the size of its balance sheet by nearly $300bn since September and decided to buy $60bn a month of Treasury bills (5 to 52 weeks) until the second quarter of 2020 in order to increase the size of excess reserves in the system. However, US commercial banks don't own any T-Bills and hence don't have anything to sell to the Fed to boost their excess reserves ahead of year end. Hence, the already thin liquidity at year-end could get even worse in the coming two weeks as the current level of excess reserves is sitting $100bn below last December's $1,500bn. Secondly, banks will also try to reduce their G-SIB score in order to minimize their surcharges by regulators. The 2019 equity rally combined with the rise in Treasury holdings have drastically increased the G-SIB scores relative to last year (2018: higher excess reserves and lower equity valuations), therefore banks will have to swap assets or outright sell some Treasuries for excess reserves. Overall, Zoltan is urging the Fed to launch QE4 to smooth the year-end liquidity squeeze; hence, we think it would be more cautious to hold risk-off currencies such as the US dollar or the Japanese yen this month.

UK: The United Kingdom is set for general election on Thursday and latest pools continue to give the Tories a nationwide lead, the implied probability that the Conservatives party wins the majority currently stands at 71% according to William Hill. The British pound has continued to appreciate ahead of the vote and is currently trading at its highest level since May against the US dollar. We think that GBP longs could experience a sharp drawdown as a hung parliament cannot be completely ruled out.

Net short specs increased to 1.25M contracts in the week ending December 3rd, mainly driven by a rise on the 2Y (+90K) and on the 10Y (+76K). Even though the US 10Y has stabilized at around 1.80% in recent weeks, momentum indicators still indicate a positive trend and the ease in uncertainty should continue to push global yields higher. However, we could see a rally in US bonds in the short run as liquidity squeezes tend to be positive for safe havens such as Treasuries (see September episode).

EURUSD: The pair has been stuck in a narrow range in the past week and nothing really seems to be boosting the euro at the moment. Next resistances on the topside stand at 1.1150 and 1.1185, which represent the 200D SMA and the 61.8% Fibo retracement of the 1.0340 - 1.2550 range. The single currency remains vulnerable in the short run, therefore we would suggest for long-term bulls to wait for lower levels to buy the pair on dips. 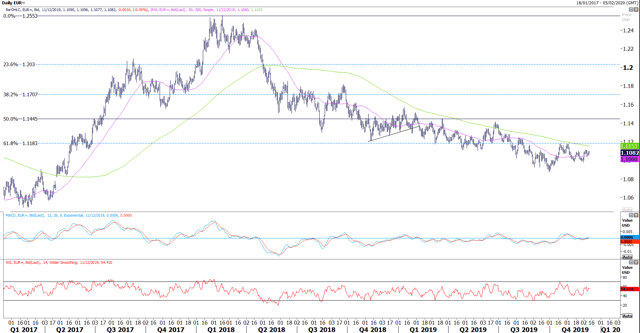 GBPUSD: The pound remains one of traders' favorite currencies ahead of the general election on Thursday, with Cable currently trading above 1.31, its highest level since May. We are not overly optimistic about the market reaction following the election's results (on Friday): Buy the rumors sell the news on Cable?

EURGBP: Even though we were stopped on our long EURGBP trade at 0.8450, we are still expecting a bull consolidation in the coming weeks. The pair is approaching the low of its 3-year range, with the next strong support standing at 0.83. We would wait for the results on Friday to open a position. 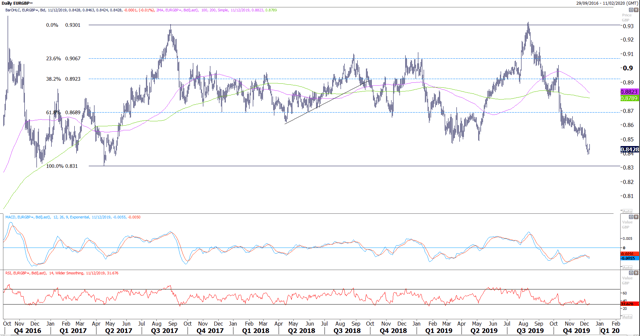 USDJPY: The pair has also been stuck in a tight range, oscillating around 108.80 in the past few weeks (200D SMA). We would slightly favor the Japanese yen as the year-end concerns may generate some preference for safe havens.

NOKSEK: We took a long position on the pair as we were speculating on a short-term rebound as NOKSEK was approaching a LT upward trending support. However, the pair broke its support line and the Swedish krona seems to be on fire these recent days. 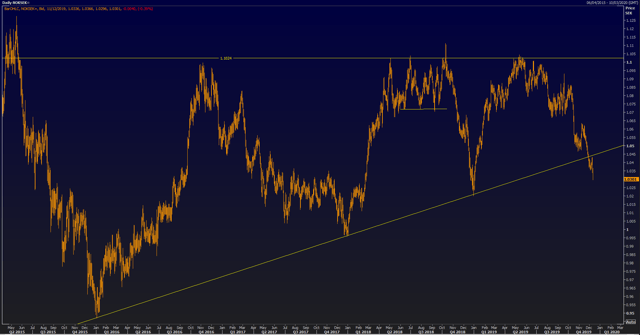 Chart Of The Week

In our previous publications, we argued that an ease in uncertainty in the first half of 2020 could continue to decrease the demand for safe assets such as the dollar or government bonds and therefore generate some USD weakness that would be offset by the appreciation of some significantly undervalued currencies such as the euro. However, we have noticed that in the past few quarters, the natural rate of interest (also called r-star) has started to weaken again in the Euro area (currently at 0.2% according to Holston et al. (2017)), while it has remained steady at around 0.6% in the US. As a consequence, the Euro-US r-star differential, which is one of the main drivers of the EURUSD exchange rate in the long run, has been trending lower in the past two years and is not favoring a rise in the euro in the medium term. This chart shows that the two times series have strongly co-moved in the past four decades (using a proxy for the Euro prior 1999) and we would need to see a positive trend in the r-star differential in order to be confident on our long EURUSD medium-term recommendation. 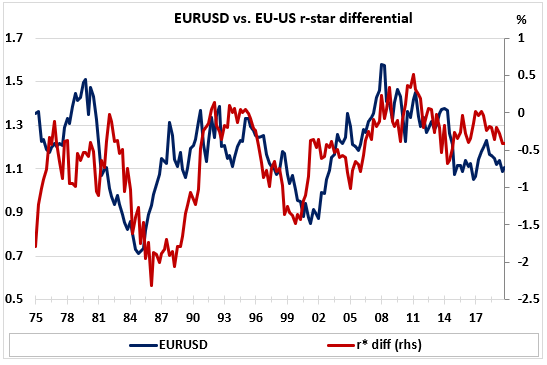 Disclosure: I am/we are long NOKSEK. I wrote this article myself, and it expresses my own opinions. I am not receiving compensation for it (other than from Seeking Alpha). I have no business relationship with any company whose stock is mentioned in this article.

Follow Rothko Research and get email alerts
+
Add a comment
Disagree with this article? Submit your own.
To report a factual error in this article, click here.
Your feedback matters to us!