Marvell (NASDAQ:MRVL) is a company going through a transition and the latest earnings report provides an opportunity to see how well it is managing the changes. While progress has been made on some fronts, there are areas that need to do better.

These acquisitions will assist Marvell in its quest for new growth drivers as management alludes to in the earnings call:

“The acquisitions of Aquantia and Avera are very strategic to broadening our semiconductor solutions portfolio for our infrastructure customers. We are well on our way to integrating both teams within our networking business”

A transcript of the FQ3 2020 earnings call can be found using this link.

These two acquisitions could boost revenue by a combined $400M with room for further upside.

The FQ3 quarterly report included the Wi-Fi business, which will no longer be included in the fourth quarter after conclusion of the sale to NXP.

“We expect our gross margin to return to more than 63% once we complete the divestiture of Wi-Fi business and a fully integrate Aquantia and Avera into Marvell supply chain.”

Once all these transactions have been completed, Marvell expects margin to improve to over 63%.

“We continue to expect our revenue in the current quarter to remain impacted by the U.S. government’s export restrictions on certain Chinese customers.”

It’s unlikely that these restrictions will be removed anytime soon, which means that Marvell will have to deal with these headwinds for the time being.

Marvell has a wide array of product lines, but hard disk drive (“HDD”) controllers are probably what most people associate with Marvell. It’s no coincidence that HDD manufacturers, such as Seagate (STX) and Western Digital (WDC), are some of Marvell’s most important customers. Unfortunately, the HDD market is declining with unit shipments going down year by year.

Nidec Corporation supplies most of the small precision motors used in HDDs. According to Nidec, unit shipments of HDDs will fall to 309M in 2019. This number used to be 564M as recently as 2014. Every segment of the HDD market is in decline except for datacenter where shipments are still increasing. All the other HDD segments (PC, external, consumer electronics and enterprise) are going down.

The shrinking market for HDDs is having an impact on Marvell and FQ3 was no exception. All three of Marvell’s business units presented a challenge, but storage was the biggest with a 29% YoY decline in revenue. Storage used to be the biggest contributor to revenue, but that is changing.

Marvell is trying to mitigate the adverse impact of HDDs by focusing on datacenter applications, a market that is still growing as reported by Nidec. From the earnings call:

“However, we did experience weaker than expected revenue from the edge market, with a softening in demand from gaming and video surveillance. We also continue to see a rapid conversion from HDDs to SSDs in the PC market, which presents a headwind for our client business. Despite challenges from current trends in the client and edge markets, our strategy to focus on the enterprise and datacenter market”

Marvell is also launching new controllers for solid-state drives (“SSDs”). However, competition is fierce in the SSD market with many competing solutions available. Marvell is unlikely to have the same position it could count on in the HDD market.

Marvell is looking for new growth drivers to replace old ones

Nevertheless, it’s clear that the future of Marvell does not lie with storage. Growth drivers will have to be found elsewhere and Marvell’s recent acquisitions are in line with this belief. For instance, the server processor market is worth tens of billions. Marvell thinks it can capture a slice worth several billions of dollars. From the earnings call:

“In addition, we recently announced that Microsoft has started to deploy servers based on Marvell's ThunderX2 server processors for internal Azure development workloads. We believe that this is an important milestone on the path to the broader adoption of ARM-based servers across the Azure platform. The progress of ThunderX adoption at our cloud and HPC customers gives us confidence and expecting revenue growth next fiscal year from our server processors starting from a base of low initial volumes and then continuing to ramp in the second half.”

Marvell got its hands on ARM-based server processors when it acquired Cavium and that acquisition is starting to bear fruit. While it may not amount to much at this point, expectations for the future are high.

However, the one area that could make the biggest difference in the short term is 5G. Marvell has high hopes for 5G. In fact, Marvell thinks that 5G could boost revenue by as least $600M. The company remains confident that it will achieve those numbers.

“A couple of quarters ago, we articulated the $600 million number which was really the business that we had already secured design wins for. We still feel very good about that opportunity.”

The good news for Marvell is that shipments of 5G products started in FQ3, a quarter earlier than expected. This was made possible thanks to an accelerated rollout of 5G in South Korea.

“In fact, one of our important growth drivers has already started to benefit us and I am very pleased that we shipped a significant amount of our 5G products in the third quarter, helping our key customer rapidly rollout base stations for the initial wave of 5G deployments in Korea. Of course, this is just a start of 5G deployments and we are looking forward to a lot more growth from 5G in the longer-term.”

However, contributions from markets other than South Korea are not expected to occur until the second half of next year. The markets Marvell is keeping an eye on are South Korea, Japan and the U.S.

“The third quarter was just the start of the 5G ramp for us as it was driven primarily by a single region. We expect these initial deployments in Korea to continue to be the main driver for our 5G revenue for another couple of quarters and we should start to see the benefit from other geographies later in fiscal 2021. By the time we approach the second half of next fiscal year, we expect a strong increase in our 5G-related revenue driven by continued Korea deployment and the start of 5G adoption in Japan and other countries such as the U.S. as they start to install 5G base stations in higher volumes.”

It’s worth noting that Marvell did not mention China even though the country is tops in the world in terms of 5G base stations. China should have 130,000 base stations by the end of 2019 and that number could rise to one million by 2020. That’s way ahead of everyone else. 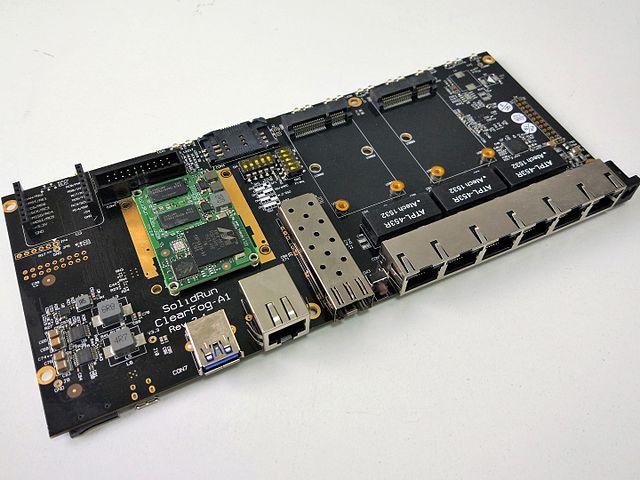 The latest earnings report from Marvell sends a mixed message. Progress has been made in some areas, but the top and bottom line have yet to move decisively in the right direction. For now, Marvell is a company going through a transition that remains a work in progress.

The company is dealing with structural headwinds that are affecting the storage unit. Marvell knows it needs new growth drivers to make up for these structural issues. The company has started the process of doing so and some accomplishments have been made. More progress will be needed if the company is to turn the ship around, but it’s not at all certain if or when that will be the case.

For instance, getting Microsoft to adopt Marvell’s server processors is a major milestone. But it remains to be seen how much market share Marvell can capture from Intel (INTC), by far the biggest supplier of such chips. So far, contributions here are not significant enough to move the needle.

In addition, other companies are looking to get a piece of the action. Amazon (AMZN) is one example. They have recently announced their latest processor, which is also ARM-based like Marvell’s. There are other companies that provide alternatives to Marvell’s solution.

Marvell will likely face stiff competition, which may limit its success in the market for server processors. The reality is that Marvell is at a disadvantage compared to other suppliers. Marvell is a relatively small company with fewer resources it can count upon in comparison to the competition.

Furthermore, the fact that Marvell has to rely on South Korea for 5G revenue is disappointing. Marvell does not expect that to change until the second half of next year, which is remarkable since a number of countries have started the rollout of 5G networks. This includes several countries in Europe.

This could be an indication that Marvell is indeed encountering the 5G headwinds as articulated in another article. It has been suggested that the ongoing trade war could restrict Marvell with regard to 5G. It’s probably no coincidence that the countries mentioned by Marvell as 5G markets also happen to be countries where base stations from China’s Huawei are not expected to compete. Marvell may not derive as much benefit from 5G as once thought.

Bottom line, being neutral on Marvell is appropriate. The company has yet to show that it’s on the path to growth. It remains to be seen whether Marvell has what it takes to make up for the persistent decline in HDD controllers. Marvell has made some progress, but it will need more of it if the quarterly numbers are to move in the direction the market wants them to do.

MarketGyrations
2.55K Followers
Welcome to my author's site. As an avid follower of SeekingAlpha, I take great interest in articles posted as the subject matter is often something that appeals to me. However, I will sometimes encounter an article that I might not agree with. My purpose is to present an alternative view to readers that they may want to take into account. I hope you find my articles interesting and informative.
Follow