On December 11, 2019, we learned directly from the company that current Jack in the Box (NASDAQ:JACK) Chairman and CEO Lenny Comma is looking to leave his post after nearly 20 years. While no timetable is set, a search process for his successor is underway.

It is widely understood that an upcoming vacancy in the CEO position can lead to M&A approaches by possible suitors, as a deal can quickly bring to a close a global search for new management. While it seems a deal is less likely than normal in this case, given that JACK not too long ago (May 2019) completed a strategic review process that did not end with an accepted buyout offer, JACK recent financial results have improved somewhat and we think potential buyers could still consider a formal approach this time around. Furthermore, we believe that global franchising leader Restaurant Brands International (NYSE:QSR) represents the best strategic option for the JACK brand.

We certainly understand that QSR's current ownership of Burger King would initially seem like a disqualifier for it to also acquire JACK, given that both serve the fast-food market in the U.S. and offer a variety of burger items, but JACK at its core is really not a burger-first concept. Additionally, QSR's buyout of Popeye's in 2017 suggests to us that some overlap in customers and food offerings is not a deal-breaker for them when it comes to M&A opportunities.

While food sourcing synergies are an obvious benefit when owning multiple brands that have some overlapping menu offerings, we think the real opportunity for the JACK brand, if owned by QSR, would be an acceleration of unit growth. QSR is known for jump-starting franchise expansion at brands it acquires, and it does so successfully on a global basis.

JACK, on the other hand, currently has zero international locations and even within the U.S. is highly regional. Consider their location footprint: 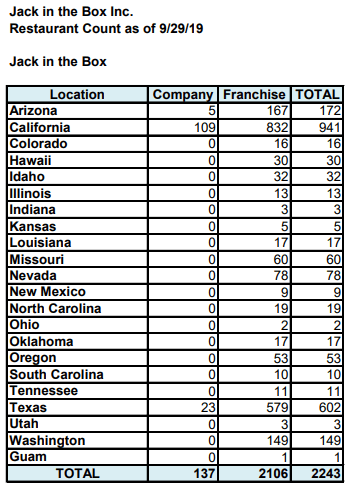 As you can see, out of 2,243 total units a whopping 83% are located in just 4 states (42% in California, 27% in Texas, 8% in Arizona, and 6% in Washington). The amount of geographic potential globally for this brand is enormous, but the company has never tried the growth approach. In fact, the opposite is true, as the chain actually has 6 fewer units in operation today versus in 2015.

If a company like QSR took over and unleashed its networks of global franchises, JACK could become a popular brand everywhere. Given their extensive experience doing so, we think QSR should totally consider making a bid for the company while the future of the management team is in flux.

As far as paying for a potential deal, which we estimate would cost about $2.5 billion (not very far off of the $1.8 billion price tag for Popeye's), QSR stock has been strong lately and could certainly be used in tandem with cash to avoid putting too much debt on the parent company:

Given where JACK stock trades today, investors would likely welcome a stock swap:

If you would like to receive all research notes and ratings changes in real-time, on JACK, QSR, and three dozen other publicly traded dining stocks, subscribe to our service today!

Dining Stocks Online
441 Followers
Dining Stocks Online (DSO) publishes investment research on the dining sector of the consumer discretionary industry. DSO's research is compiled and edited by investors with more than two decades of experience assisting in the allocation of capital to the public dining sector, both personally and for advisory clients. DSO aims to become a valuable provider of niche research exclusively devoted to publicly traded dining chains.

Disclosure: I am/we are long JACK. I wrote this article myself, and it expresses my own opinions. I am not receiving compensation for it (other than from Seeking Alpha). I have no business relationship with any company whose stock is mentioned in this article.