Thanks to OPEC rallying the troops last week, we have a positive driver for the oil price going into the new year. This was discussed in an internal DDR article last week. Here's some commentary from that strategy and how we've been playing it.

Now we have clarity...as much as we can ever have clarity when it comes to oil pricing. We will likely see an upward push through the $60 level for WTI and toward $70 for Brent as previously discussed. Oil will now default to the next most important driver- trade, and the ongoing discussions between the U.S and China for stability and future direction.

This is bullish for our energy stalwarts BP (BP), Shell (RDS.B), and Total (TOT). All have suffered adverse price action over the last year or so, and are in a position to rebound in the near future. And, let's not forget the three major service providers we follow, Schlumberger (SLB), Halliburton (HAL), and Baker Hughes (BKR). These companies have tremendous potential for rebound as they have beaten down to an even greater extent. We have been pumping these guys hard in the DDR over the past half year as being in a bottoming pattern and presenting good profiles for accumulation. 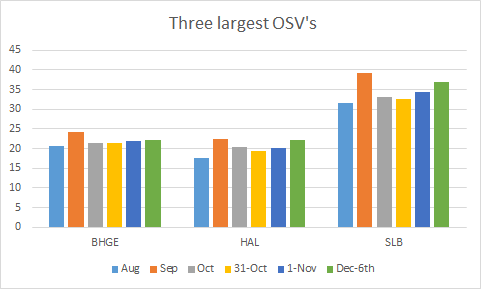 The other big driver for growth in the OSVs we cover is the trade negotiations that have put a damper on growth expectations for 2020. Any breakthroughs here and upward revisions for oil consumption will come. Something that will be very bullish for oil prices, as we expect supplies to tighten for a number of reasons in the new year.

We've been expecting some improvement here, as we have discussed in past articles. There is strong motivation on both sides to put away the knives and play nice. It could be coming together. Last, we opined thusly.

The drivers for both sides coming to an agreement as outlined above are pretty strong for both countries. Trump, heading into an election year needs a deal to bolster his campaign. China's economy has slowed for the seventh straight month and the pain is palpable amongst their workers. Add to this Xi Jinping's authoritarian crackdown and that the common folk are becoming restive. Popular unrest is avoided like the plague in autocracies.

As of the indications today, this "deal" between the U.S. and China seems to be moving toward a Phase I conclusion.

President Trump wrote in a Tweet on Thursday morning: "Getting VERY close to a BIG DEAL with China. They want it and so do we!"

Notes from The Oilfield Almanac: The Case for Big Red

One of companies we've really been high on as it has declined to multi-decade lows is Halliburton (HAL). Hally is priced like it is going out of business soon. Nothing could be further from the truth, and in actuality, we think the worst is behind them and growth will return in 2020. At current prices, Hally is a compelling buy.

Oil companies simply can't do their work without the service HAL provides. As they begin to restore Capex in the new year, HAL will see pricing pressure lessen, and margins will improve. Toward that day, they have been doing the prep work to fix the earnings statement and improve cash flow.

Hally has been in a cost-cutting mode that have some suggesting that it is a sell at these low prices. We beg to differ. It is a normal and necessary practice to lay off under-employed staff, mothball unused machinery, and close idle plants. That is what has been going on.

It's called 'right-sizing' the business, and while it's painful for the people whose livelihoods are affected, it actually sets the stage for a recovery in the business fundamentals.

Back in October, my co-conspirator in this blog, Badsha Chowdhury did a deep dive on Big Red. It is linked below for your review.

Hally bottomed in this recent cycle at $16.97/share. From this low in late August, it has rallied about 30%. We think it has further to go.

The drivers will be a bottoming in shale drilling that should occur in Q-1, 2020. Brighter prospects brought on by the OPEC deal and upward revisions in oil demand will spur a recovery in the stock.

Worth noting also is the fact that several industry analysts have called a bottom in Hally and expect a return to growth in 2020.

One of the companies we highlighted in the DDR recently on the operator side was China National Offshore Oil Company (CEO). Better known as CNOOC, they have aggressively moved to soak up assets globally that other countries are shunning. We wrote a very detailed and bullish article on this company a couple of years ago.

It was updated recently for DDR members with a buy target of ~$140/share. Since that original article, they have been aggressively picking up assets in Brazil, Mexico, and the Gulf of Mexico.

We were a little conservative here and probably aren't going to see this level if the OPEC deal holds and news about trade bears out.

Understand that CNOOC is an arm of the Chinese government and has a remit from the Party to pick up resources at almost any cost. This was discussed recently in a Bloomberg article. Essentially, with a huge pot of money that being semi-state owned gives them to distribute, cash strapped countries in Africa, Asia, and Latin America find a ready friend in China. Chinese development banks will take risks other commercial entities have waved by.

China's thirst for offshore oil has continued unabated, even post-$100 oil where economics are tougher. The backing by the government of the three main oil giants has meant they are better positioned than many other foreign oil companies to invest in pricey projects abroad. Money always tells a story and they have plenty to spread around.

The Chinese now have a massive footprint offshore globally and are looking to extend it. CNOOC is happy to oblige. CEO stock is very volatile, up and down, and this week, with positive news we've discussed, has popped strongly higher. In a stock as expensive as this one is, it is important to get it at the rock bottom price or wait for another opportunity to come along. That said, we are watching this one closely, but with patience.

There are some positive signs in the energy space. The first in a couple of years. It remains to be seen how the trade/demand driver will play out, but we are bullish about supply going into next year.

Our next benchmark will come Dec. 16th with the monthly release of the EIA's Drilling Productivity Report. In it, we expect further flattening of the shale growth curve and further reduction in the DUC inventory. Pulling DUCs out of inventory is the only thing that has kept production rising as drilling has declined.

We view the energy stalwarts like Halliburton as the way to play this improvement in the energy environment and feel that, even though it has rallied strongly, it has further to go, as we have discussed. Given the strength of the rally, we might exercise some restraint at today's price. Stock price movements are never straight up or down and a little bad news, and we could see a 10% drop in Hally's share price. Patience as always.

Even though we've focused on Big Red in this article, you can't go wrong with any of the big three at current prices. All will see share price improvement in the scenario we've outlined here. 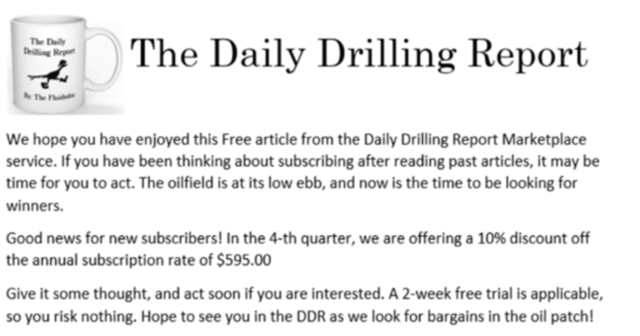 Fluidsdoc
8.47K Followers
Author of The Daily Drilling Report
40 years of oilfield and analyst experience to work to find you winners.

Disclosure: I am/we are long HAL. I wrote this article myself, and it expresses my own opinions. I am not receiving compensation for it (other than from Seeking Alpha). I have no business relationship with any company whose stock is mentioned in this article.

Additional disclosure: I am not an accountant or CPA or CFA. This article is intended to provide information to interested parties. As I have no knowledge of individual investor circumstances, goals, and/or portfolio concentration or diversification, readers are expected.