Virtu Financial (NASDAQ:VIRT) is a market-making firm that mostly profits from volatility and trading volumes. In a way, it's similar to stocks like the CME Group (CME) or the NASDAQ (NDAQ). The appeal of these types of stocks is that they tend to offer uncorrelated returns to investors. This is why I consider it's key to buy these types of stocks purely on a valuation basis, as they don't follow the market in any meaningful way. Moreover, VIRT also seems to be focused on growing through M&A. This strategy is successfully increasing its global reach while extracting juicy synergies. I believe VIRT is undervalued due to its attractive dividend yield and cheap valuation multiples. Hence, I believe VIRT is a surprisingly good dividend and value play on an otherwise expensive market. 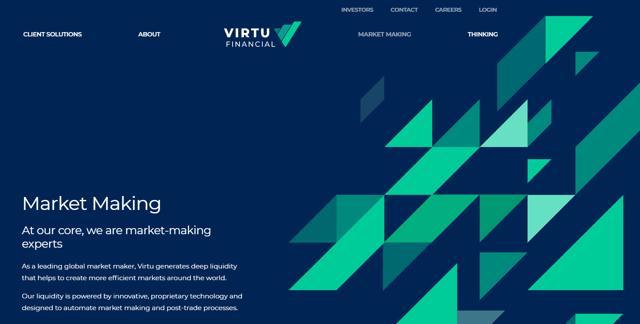 VIRT's revenues are broken down in execution services and market-making services. For context, the last quarter displayed was split 43% and 57%, respectively. This means that VIRT mostly profits from volatility and trading volumes. Naturally, this makes its revenues entirely disconnected from market returns and also makes its revenues unpredictable and highly volatile. For example, 2018 was a big year for VIRT as the markets went through extreme ups and downs. In particular, the market's pullback during the fourth quarter of 2018 was a great revenue contributor for VIRT. But, on the other hand, 2019 has seen the VIX (a good measure of market volatility) drop, which has been challenging for VIRT. 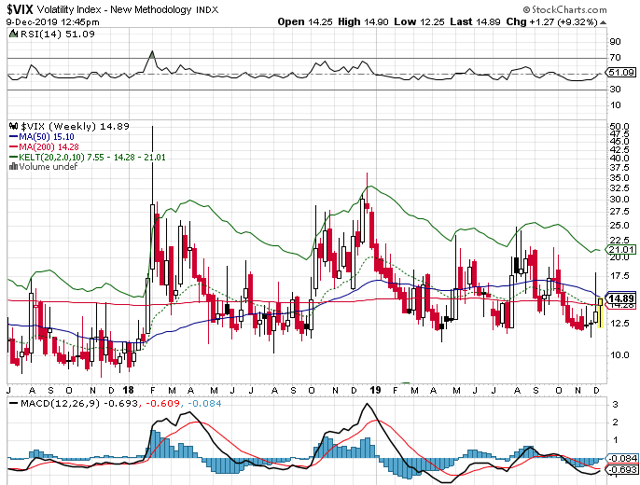 This is why an excellent way for VIRT to grow is through M&A. After all, this way, VIRT can quickly acquire new customers and revenue streams, while at the same time extracting synergies. Such synergies are mostly related to fewer employees and additional revenue verticals. However, this is not without its potential downside. You see, M&A only works when firms are, ultimately, capable of integrating their acquisitions on time and within budget. Otherwise, transaction costs, execution risks, and payback periods can quickly turn an accretive deal into a cash drain or worse.

As previously mentioned, 2019 has been a challenging year because volatility has returned to historical lows. Moreover, 2019 has a tough comparison versus 2018, which was a phenomenal year for VIRT due to a combination of factors. Plus, 2019 has been negatively affected by acquisition costs, while at the same time, the synergies from such acquisition have not yet been fully realized. For instance, severance and transaction costs have been substantial this year and have made a dent into VIRT's results. 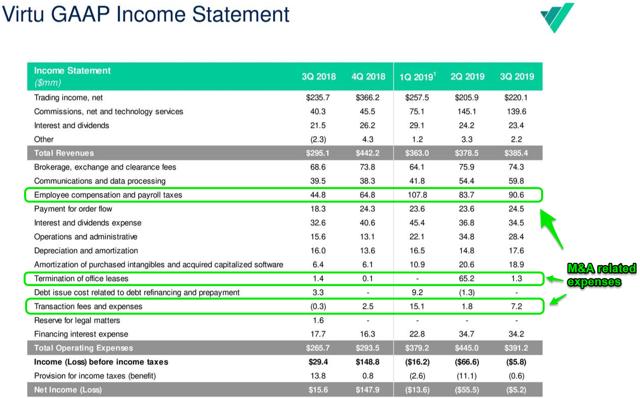 Nevertheless, going forward, VIRT expects that these M&A related costs will subside. Moreover, VIRT expects to extract substantial cost efficiencies and synergies that should become noticeable in VIRT's P&L by 2020. So, I see a clear path to recovery for VIRT. Yet, the market has been heavily discounting 2019's disappointing results.

For context, the stock has been battered down and has significantly underperformed the broader market. Moreover, VIRT has fueled this narrative by missing analysts' expectations for the past few earnings reports. I assume this has been mostly due to Wall Street underestimating the impact of low volatility and trading volumes, plus the fact that synergies haven't entirely shown up yet. So far, VIRT has had to pay transaction, severance, and lease termination costs to the tune of $169.8 million over the past twelve months. 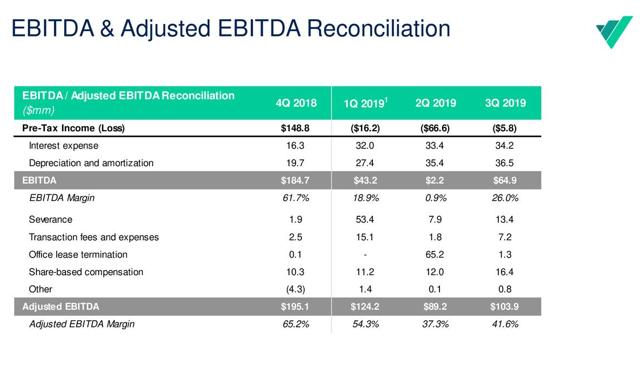 But regardless of the short-term pressures, VIRT has been benefiting from three specific trends. First, VIRT has focused on expanding its addressable opportunities through a wider global reach. This has been easily attained through M&A. Secondly, VIRT has also become much better at capturing rates, which improves the yield of those additional trading opportunities. And lastly, VIRT has benefited from a lower interest rate environment by refinancing roughly $500 million of outstanding debt, which reduced its interest rates from 6.75% to 4.80%. VIRT also extended its debt maturity from 2022 to 2026. Thus, as a result, VIRT now saves approximately $8.6 million per year. Therefore, all in all, VIRT's recent success has been a function of growing its revenues while enhancing efficiencies and benefiting from favorable interest rates. I imagine these trends are likely to continue into 2020. 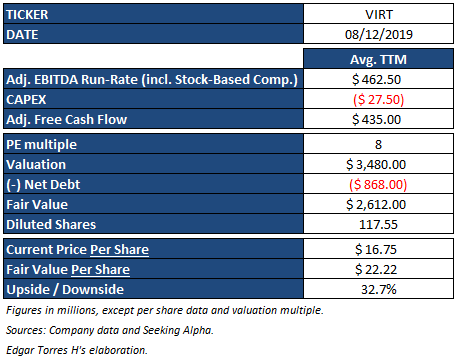 Furthermore, as you can see, my valuation model for the company shows that the current EBITDA run-rate should be about $460 million per year. I obtained this figure by merely subtracting stock-based compensation of the company's adjusted EBITDA metric for the past four quarters. I think my number is representative of what we can expect of VIRT going forward because the past two quarters already include the ITG acquisition. In fact, this run-rate figure might increase as VIRT extracts additional synergies, but that remains to be seen. Then, with that EBITDA run-rate, I can easily derive a VIRT valuation that implies a fair value of $22.22 per share and a 32.7% potential upside.

Furthermore, one of VIRT's main selling points is that its business' cash requirements are minimal as it can easily borrow whatever amount of cash it needs to fund its trades. Also, capital expenditures are relatively insignificant compared to VIRT's cash generation capabilities. Thus, this results in a very flexible business model that can scale rapidly if market conditions demand it. But also, this offers VIRT the flexibility to scale down without facing substantial losses due to high fixed costs. 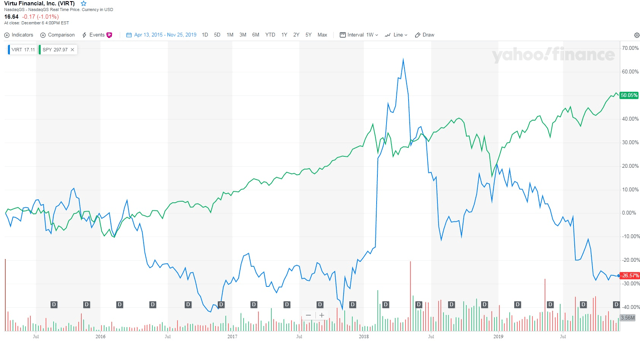 Source: Yahoo Finance. VIRT has significantly underperformed the market since its IPO.

So, the question, ultimately, is whether or not VIRT has a sustainable business moat. To answer this, I think it's important to consider that there are numerous viable competitors in the market-making and executing business. However, much of VIRT's success is due to its technology and scalability. In my opinion, these are significant entry barriers, which cannot be easily replicated. Thus, VIRT's business moat isn't perfect, but it's robust enough for investors to sleep well at night. Moreover, as VIRT keeps growing through M&A, its moat should keep strengthening.

The only issue I find with VIRT's business model is that the revenue streams are unpredictable because market conditions are ever-changing. Naturally, this makes VIRT uncorrelated, which is a plus. But, this also increases the stock's risk profile, which deserves to be discounted as well. Nevertheless, I feel the current discount seems excessive.

Finally, there's also the regulatory question regarding the Democrats trying to put on a 0.1% tax on every financial transaction. According to VIRT's management, this is a Damocles sword hanging over VIRT's outlook (and industry for that matter). They believe that if this tax went into effect, it would probably significantly hamper the US's capital markets. Moreover, it'd likely be a materially adverse impact on VIRT's business. So, management is very vocal when talking against this and also remains hopeful that, ultimately, they won't materialize.

It's really a tax on pensions and the middle class and the 401(k). That's ultimately who would pay it. (…) It really is a tax on the middle class. I would point out that Vice President Biden just this week, and his staff, put out a statement to that effect. So this is not a left or right issue. It's not a political issue, this is really a common sense and what's good for the markets and what's good for America kind of issue.

But ultimately, the most persuasive evidence of VIRT being undervalued is that the management itself feels VIRT's dividend is a must buy at these levels. Moreover, the CEO stated that VIRT's dividend should be safe for the foreseeable future and will always be one of his top priorities as long as he remains in charge. In fact, Mr. Cifu thinks VIRT is undervalued and investors should consider buying at these levels. In my view, it's typically a good buy signal when insiders say their stock is undervalued.

So all of the income investors out there, yes, they should buy Virtu.

Furthermore, I estimate VIRT's dividend yield is objectively high for today's standards. Currently, VIRT sports a very juicy 5.77% dividend and also trades at a forward PE ratio of 17.4. Moreover, its EV/EBITDA ratio is a mere 12.0. Also, VIRT's TTM PS multiple is low at 1.43. So, it's fair to say the stock does look cheap through multiple angles. 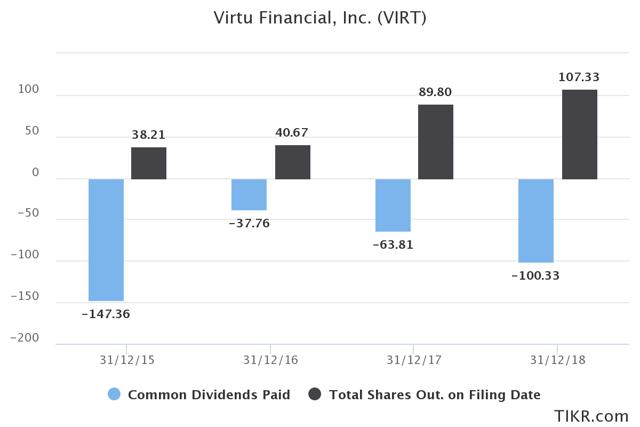 In my view, VIRT does have some critical risks to discount. For example, its revenues depend on market conditions, which are unpredictable and volatile. Additionally, VIRT also has regulatory uncertainties that could derail its success story and promising outlook. Still, I consider these risks are either unlikely or entirely mitigated by VIRT's positive aspects.

Hence, I believe VIRT's business model is robust enough to justify a long-term investment. Plus, its outlook should continue to improve due to its increasing synergies. And finally, the stock's valuation looks cheap, with a management team committed to supporting its fantastic dividend yield. Hence, I consider VIRT a viable dividend and value investment at these levels.

Thank you for reading and good luck.

Edgar Torres H
2.34K Followers
Follow me for analyses of undercovered/overlooked stocks. My takes are based on numbers but without completely ignoring the underlying story. I'm not uncomfortable holding unpopular opinions, nor do I seek them. I just want to get as close to the truth as possible.I've been an Investor for over nine years. I write to structure my thoughts. I worked on my country's stock exchange as an analyst for private debt prospectus. I worked as a sell-side analyst and also as a broker. I love the markets and everything related, and now I’m able to be a full-time investor. I'm very grateful for this. I hope my comments/articles are of use to someone else. - "Veritas Super Omnia."
Follow

Disclosure: I/we have no positions in any stocks mentioned, but may initiate a long position in VIRT over the next 72 hours. I wrote this article myself, and it expresses my own opinions. I am not receiving compensation for it (other than from Seeking Alpha). I have no business relationship with any company whose stock is mentioned in this article.