Applied Materials (NASDAQ:AMAT) stock has been in comeback mode in the fall of 2019. For those okay with collecting dividends, that is a bonus. For those seeking Alpha in the market, it is fair to consider whether the available alpha is in the rearview mirror or more is ahead.

My position is that, barring a major global recession or some unforeseen demand collapse in the semiconductor chip industry, Applied Materials is positioned to continue to grow profits faster than the overall market. The key to understanding this thesis (not mine alone) is the current state of Moore's Law. But first, a review of fiscal Q4 2019, ending October 27, numbers. Those results and guidance for Q1 2020 indicate semiconductor manufacturing equipment demand hit bottom this year and is now increasing. 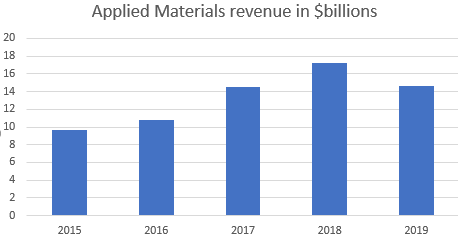 Failure of revenue to grow y/y, with falling non-GAAP EPS, would normally be a negative sign. However, the semiconductor equipment business tends to be somewhat cyclical, even outside of the macroeconomic cycles. Applied had record revenue in fiscal year 2018. Fiscal year 2019 revenue returned to near the 2017 level. Q4 fiscal 2019 indicated Applied could be past the bottom of the cycle. Guidance for Q1 fiscal 2020 (January quarter) is sending the same signal. Applied expects revenue to be $4.10 billion, plus or minus $150 million. That would be up from $3.75 billion in Q1 fiscal 2019. Non-GAAP adjusted diluted EPS is expected to be in the range of $0.87 to $0.95, which would be up from $0.81 in Q1 2019.

Applied Materials is in very good shape financially. At the end of the quarter, the cash and equivalents (including long-term investments) balance ended at $5.32 billion, up sequentially from $4.66 billion. Cash flow from operating activities was $826 million. Capital expenditures were $97 million. $194 million was used for cash dividends. $500 million was used to repurchase stock in the quarter. Long-term debt ended the quarter at $4.7 billion.

The End of Moore's Law

Moore's Law, named after former Intel (INTC) CEO Gordon Moore, is not a law of nature but the observation that the number of transistors per unit area on a semiconductor double about every two years. There are some variations on how it is stated, but it essentially says that technologies are developed on a regular basis that shrink the size of semiconductor circuits. As a result, the industry can rapidly make prior processors (and computers) obsolete by either making a unit of the same complexity on a smaller die space requiring less power or by using the same die space to create a more capable processor.

Moore foresaw that his law could go on to infinity, but when first stated in 1965, infinity was a long way away. It no longer is. In the real world, the release of new CPUs by Intel shows this law is approaching a wall, essentially due to the size of molecules. It is becoming more difficult to shrink to a new process node, with acceptable levels of quality and reasonable cost, at the present time. This is not just about shrinking masks, the images that mark out which parts of a silicon wafer gets treated to create transistors. It is about fundamental limits of materials.

New Opportunities for Applied and Competitors

The idea that the semiconductor equipment manufacturing industry would undergo substantial change as Moore's law comes to an end is not new, it has been a theme of CEO Gary Dickerson for at least 5 years. For a fuller account, see the Applied Materials Q4 2019 analyst conference transcript. It is also notable that in addition to traditional memory and processing ICs, the industry is seeing a transition to artificial intelligence processing, creating a need for even more, and more specialized, processing power.

To drive improvements in power consumption, performance, area, and cost while Moore's Law is slowing, a new set of capabilities is needed. These are: new architectures, 3D structures, new materials, new ways to shrink geometries, and new connection methods. Several years ago, Applied saw this future and began investing R&D dollars to address it. In addition to continuing to innovate in equipment for material deposition, removal, modification, and analysis, Applied is developing what it calls Integrated Materials Solutions. These new products will start to come to market in 2020. While specifics have not been released, the basic idea is to co-optimize the deposition, removal, and analysis processes.

Already Applied Materials technologies used for logic chips are being applied to create better DRAM, including advanced transistors and interconnects. These types of technologies are also important in specialized applications like IoT, automotive ICs, image sensors, and communications. Patterning is another area of innovation because as geometries shrink, new materials are needed that require coordinated deposition and removal.

One way to get more computing out of a given surface area is to move to 3D circuits. This has already taken place to an extent, notably with 3D NAND. The problem of getting accurate interconnections between components in 3D ICs is a major opportunity for Applied and its competitors.

This article has not addressed the competition, so a caveat is that one or more of the major competing semiconductor equipment manufacturers, or a small and nimble upstart, might eat some or all of Applied's lunch. The usual caveats also apply to future results and the stock price: market volatility, macro-economic volatility, trade issues, and unknown unknowns. However, given Applied's past performance, cash, and cash generation, I believe it is a relatively safe investment.

I believe the world will be consuming more silicon in coming decades; there is no end in sight. Artificial intelligence requires more powerful processors, better communications, and more memory. With process nodes coming further apart in time and perhaps terminating around the 2-nanometer mark, the chip manufacturers will be needing ever-more sophisticated equipment, working with new materials, to continue to deliver performance improvements. Applied Materials has a proven capability to deliver the innovation needed for the coming epoch. I foresee fat profit margins and higher volumes of sales, leading to very, very good returns for investors. I conclude that, most likely, more alpha can be captured by those investing at the current AMAT price.

William Meyers
6.35K Followers
I provided stock and bond research and analysis to a small cap specialist investor, Lloyd Miller, from 2002 until his death in January 2018. For my own account I invest mainly in technology and biotechnology stocks. My technology and investment web site is openicon.com, where readers can view the notes I take to make decisions and to write articles for Seeking Alpha.
Follow

Disclosure: I am/we are long AMAT. I wrote this article myself, and it expresses my own opinions. I am not receiving compensation for it (other than from Seeking Alpha). I have no business relationship with any company whose stock is mentioned in this article.