Welcome to Orchid's Platinum Weekly report, in which we discuss platinum prices through the lenses of the GraniteShares Platinum Trust (NYSEARCA:PLTM) and the Aberdeen Standard Physical Platinum Shares ETF (NYSEARCA:PPLT)

The marked appreciation in platinum prices so far this year (+16%) has prompted investors to question the sustainability of the rally considering the significant increase in monetary demand for platinum (whether it comes from speculators or ETF investors) in contrast to the weak fundamental demand stemming from the automotive sector.

While we acknowledge this concern, we wish to provide on this platform a short-term outlook for platinum prices. Our analysis shows that platinum is currently being mainly driven by the macro, and as such, if gold goes up, platinum should go up too. In the current trading regime, we find that the fundamentals of platinum do not matter much to assess the near-term price direction of platinum prices (~3 months).

Our positive macro outlook for the precious metals complex, due to the elevated uncertainty on the trade front and the too deep complacency among investors most of 2019, leads us to believe that platinum prices should continue to move higher in the near term, alongside gold and silver.

In this context, we expect PLTM to PPLT to retest their 2019 highs by year-end, suggesting an upside potential of at least 6%. 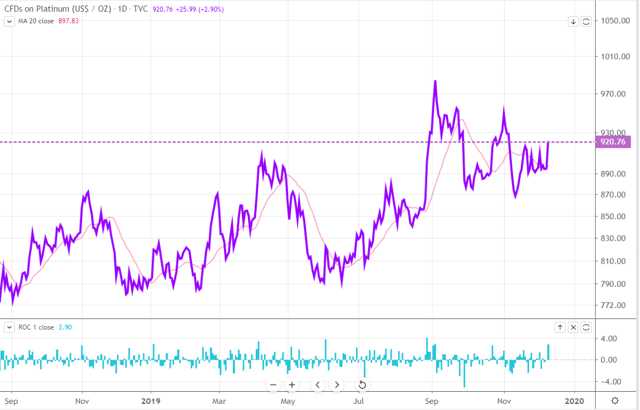 The GraniteShares Platinum Trust, which was created in January 2018, is directly impacted by the fluctuations of platinum spot prices because the fund physically holds platinum bars in a London vault and custodied by ICBC Standard Bank.

The investment objective of the GraniteShares Platinum Trust is to replicate the performance of the price of platinum, less trust expenses (0.50%), according to the official GraniteShares' website.

The physically-backed methodology prevents investors from getting hurt by the contango structure of the platinum market, contrary to ETFs using futures contracts.

Also, the structure of a grantor trust protects investors since trustees cannot lend the platinum bars.

PLTM is the lowest-cost ETF on the market, with an expense ratio of 0.50%. PLTM competes with the Aberdeen Standard Physical Platinum Shares ETF, which was created in October 2010, which is however more expensive considering that its expense ratio is at 0.60%.

Taking into account the total cost, however, PLTM is more costly than PPLT due to the higher spread (0.10% for PPLT vs 1.08% for PLTM over the past 60 days).

But given the lower expense ratio for PLTM, we expect more flows into PLTM. As such, the higher level of liquidity of PLTM will reduce the spread.

Consequently, we believe the total cost for PLTM will ultimately move below than for PPLT. 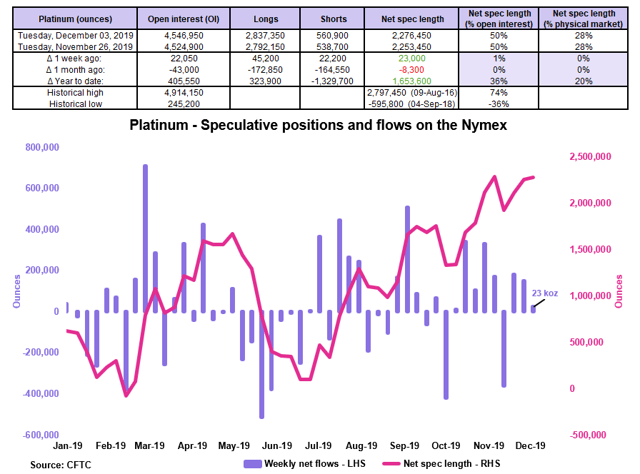 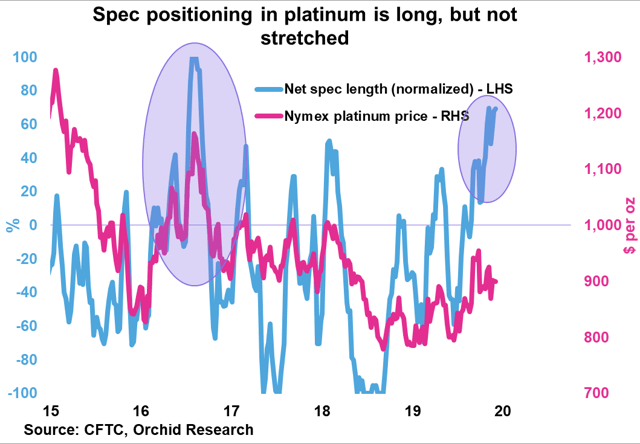 This suggests that there is still some dry powder among hedge funds to deploy on the long side of the platinum futures market.

Implications for PLTM, PPLT: Because platinum's spec positioning is not stretched, we continue to see some room for additional speculative buying in platinum. The impact on platinum spot prices and PLTM should be positive. 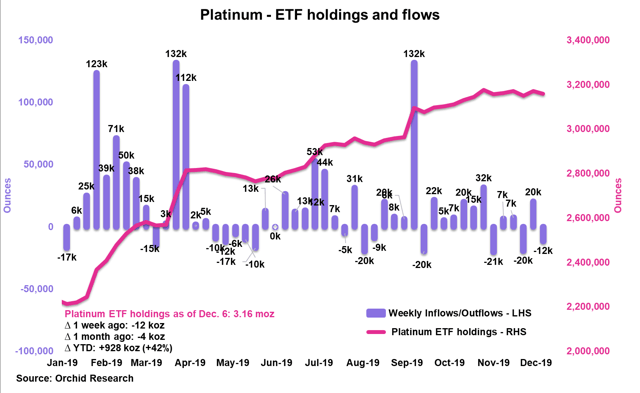 ETF investors slashed their platinum holdings by 12 koz last week, after buying 20 koz in the prior week.

Platinum ETF holdings have stabilized at 3.1 moz so far in Q4, after substantial buying in the first half of the year.

So far this year, ETF investors have accumulated 928 koz of platinum, marking a 42% increase in platinum ETF holdings.

Across the precious metals space, ETF investors have been relatively the most bullish on platinum this year.

The substantial surge in investment demand for platinum is driven by the unusual price discount of platinum to palladium and gold.

Implications for PLTM, PPLT: Because platinum remains "cheap" compared to the other precious metals (especially palladium) and is currently viewed as a safe-haven (see section below), we think that ETF investors will continue to accumulate platinum should the macro backdrop for safe-havens remain favorable. This should tighten the refined balance of the market, which in turn would lend support to platinum spot prices and thus PLTM.

Ignore the fundamentals in the near term

In this section, we would like discuss the outlook for platinum prices in the near term (around 3 months). 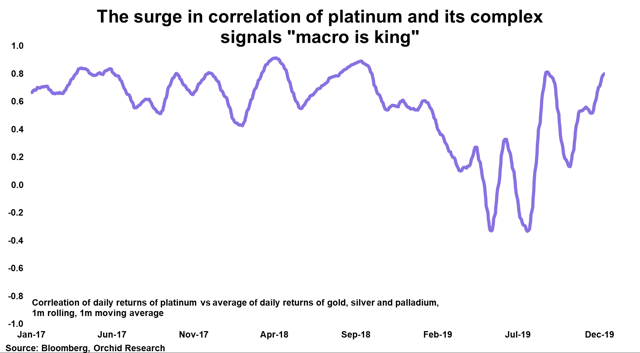 In the current trading regime, we find that platinum is highly responsive to the macro environment, which is evident in its very high correlation with the rest of its complex (gold, silver and palladium). As a result, common factors driving the entire precious metals space will likely be the most impactful on the fluctuations in platinum prices.

Given our bullish macro view for the precious metals complex, we believe that platinum prices are likely to move higher in the months ahead. Although we acknowledge that whether platinum acts as a safe-haven or not is subject to debate, our statistical analysis shows clearly that at present, the macro is king when it comes to platinum pricing.

Implications for PLTM, PPLT: Since we believe that the macro will be the main driver of platinum prices in the near term, our positive macro outlook for the precious metals space leads us to think that platinum prices are likely to trade higher in the months ahead. This should therefore be supportive of PLTM and PPLT.

We are bullish on PLTM and PPLT in the coming months, not due to the fundamentals but due to our bullish macro expectations for the precious metals space. It is crucial to understand what is currently driving platinum prices in the current regime and our answer to this question is the macro. Since we have a bullish macro outlook for the precious metals space, we believe that platinum prices will move higher in near term, despite the fact that monetary demand for platinum has already surged significantly so far this year.

We expect platinum, PLTM, and PPLT to retest their respective 2019 highs by year-end, representing an upside potential of at least 6%.

Orchid Research
5.6K Followers
Orchid Research focuses mostly on commodity and macro analysis, with a particular emphasis on the metals markets and China. We conduct research on supply and demand trends across commodities. We also analyse global macro dynamics and their reflexive interactions with the commodity complex. With 10+ years of experience in macro and commodity research, Orchid Research seeks not only to deliver unbiased views and accurate forecasts, but also to identify trade opportunities generating α.
Follow