At the beginning of this month, I made the argument that the CAD/USD could be due for a rebound, given that the Bank of Canada does not seem likely to trigger a rate cut given a rebound in domestic demand.

As expected, the Bank of Canada decided to hold fire on a rate cut, keeping the overnight rate at the present level of 1.75 percent. However, while the CAD/USD saw a brief rise to 0.76 on the news, the pair quickly stabilized at a level of 0.7558 at the time of writing – which is not too much higher than the level prior to the announcement that a rate cut will not take place. 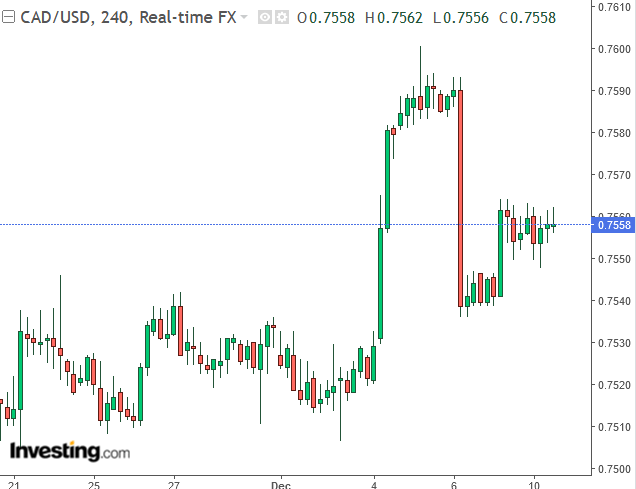 In this regard, the prospect of no rate cut appears to have already been priced in by the currency. That said, what can we expect from here?

To answer this question, it is important to understand the context in which the recent rate decision was taken. Specifically, inflation rates have been trending near the 2 percent target over the past two years. In this regard, the Bank of Canada did not see the need to join other central banks (e.g. the ECB) in cutting rates further to stimulate growth.

However, even though domestic demand in Canada is strong, it is notable that personal insolvencies in Canada are now at a 10-year high. Should this ultimately harm domestic demand, then the Bank of Canada may have no choice but to reduce rates further – and we would likely see the CAD/USD drop significantly as a result.

In this regard, we could be approaching a point where we see asymmetric risk as far as the CAD/USD is concerned – the CAD/USD has little upside but could be exposed to significant downside in the event that the Bank of Canada is forced into a rate cut due to low growth – we could be looking at a drop below the 0.75 level under this circumstance. For this reason, I take a bearish view on the CAD/USD at this point in time.

Discount Fountain
4.04K Followers
I am an independent investor with an interest in analyzing stocks across the consumer, finance, telecommunication, and travel sectors. As a data scientist, I also have a great interest in using data tools to better understand a company's financial position.Some examples include:- Analysing ADR and RevPAR trends by brand for Hilton Worldwide Holdings (HLT) using SQL: https://seekingalpha.com/article/4517248-hilton-worldwide-holdings-an-analysis-of-adr-and-revpar-trends- Building a Monte Carlo simulation in Python to analyze loss ratios for Zurich Insurance Group (ZURVY): https://seekingalpha.com/article/4459821-zurich-insurance-stock-solid-insurance-company-still-faces-risks- Using PostgreSQL to aggregate quarterly churn and ARPU data for Deutsche Telekom (DTEGY) and analyse trends over time: https://seekingalpha.com/article/4516805-deutsche-telekom-growth-potential-remainsDisclaimer: All of the author's articles are written on an "as is" basis and without warranty. They represent the author's opinion only and in no way constitute professional investment advice. It is the responsibility of the reader to conduct their due diligence and seek investment advice from a licensed professional before making any investment decisions. The author disclaims all liability for any actions taken based on the information contained in any articles published.
Follow