With many emerging markets battling the deflationary force of low commodity prices, this fall’s crude oil rally is a welcome sign. Oil prices are threatening to break out above the benchmark $60 level, which would be good news for the world economy. In this report, I’ll make the case for being bullish on oil’s intermediate-term (3-6 month) outlook based on some rather timely geopolitical and fundamental developments.

After peaking at $77/barrel last November, oil prices have had a tumultuous 2019. The rebound from last December’s low price of around $45 to its April 2019 high of $65 was a volatile ride for traders. The subsequent drop in oil prices to around $50 this summer, and the most recent rally back to the $60/barrel level, nearly completes what has been a dizzying year for the energy sector. 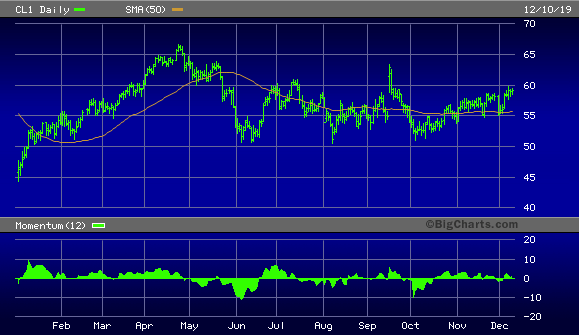 Yet, despite the periodic rallies in crude price this year, 2019 will largely be remembered as a “down” year for oil. At least that’s what it feels like to many nations whose economic fortunes are dependent on higher oil prices. One such nation is Russia, whose reserves of crude oil are among the world’s largest. The country is also one of the world’s largest oil producers, and crude petroleum accounts for its biggest export. Not surprisingly, it’s in Russia’s best interest to have higher oil prices. To that end, it has joined a coalition of OPEC and non-OPEC allies in an effort to reduce the output of crude oil.

At a recent OPEC meeting, Russia agreed to increase its previous supply cuts by an additional 70,000 barrels per day in the first quarter of next year. Alexander Dyukov, CEO at Russia’s Gazprom (OTCPK:OGZPY), anticipates the production cuts will result in the oil price remaining in the U.S.$55-65/barrel range in Q1 2020.

Populist unrest in Iran is another geopolitical factor which could easily result in higher oil prices in 2020. Iran is currently experiencing its bloodiest disturbance since the 1979 Islamic Revolution. According to a Reuters report, thousands of Iranians have been wounded, with more than 1,000 killed in recent protests. The protests began, ironically, over after Iran’s government increased fuel prices by as much as 300%.

U.S. economic sanctions against Iran are reportedly hurting Iran’s economy, and the resulting attacks on oil tankers and pipelines have already had a discernible impact on oil prices. Recent drone and rocket attacks against Saudi Arabian oil pipelines have been linked to both the Yemen and Iran. The attacks have resulted in the temporary disruption of crude oil supply and have contributed to this month’s rise in prices.

Another factor that could result in higher energy prices in 2020 is the reported reduction in output from the U.S. shale industry. According to a report by Nick Cunningham, the U.S. shale industry is “cutting back amid heightened financial scrutiny from investors” even as expensive drilling procedures become less economically feasible in light of this year’s lower oil and natural gas prices.

On a related note, a November report from the Institute for Energy Economics and Financial Analysis (IEEFA) found shale producers in the Appalachian region of the U.S. were suffering significant financial setbacks in 2019. The report revealed that:

Seven of Appalachia’s largest producers collectively spent half a billion dollars more on drilling than they realized by selling oil and gas last quarter.”

Profitability has definitely become a problem for many domestic exploration and production companies. While many oil and gas ETFs on Wall Street have dropped by more than 30% in 2019, the share prices of many individual oil and gas producers have seen far greater declines.

Below is a graph which illustrates the magnitude of the drop in several major energy stocks this year. The implication of the IEEFA report is that many domestic energy producers will likely cut production in the coming year. 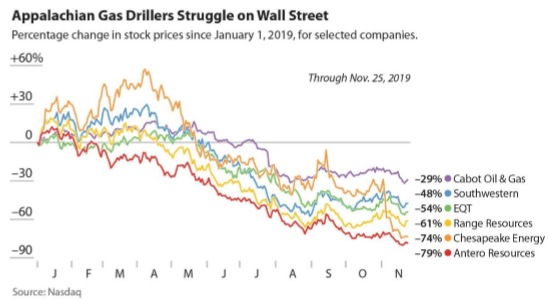 Yet another potential contributor to higher oil prices in 2020 is the growing likelihood of weaker U.S. dollar index (DXY). As the Trump administration has begun labeling some nations as currency manipulators, the president has made clear his intention to weaken the dollar through policy intervention. Moreover, a mutually beneficial outcome to the U.S.-China trade war - which many economists anticipate - would also likely result in a softer greenback. A weaker dollar would put upward pressure on commodity prices, including oil. 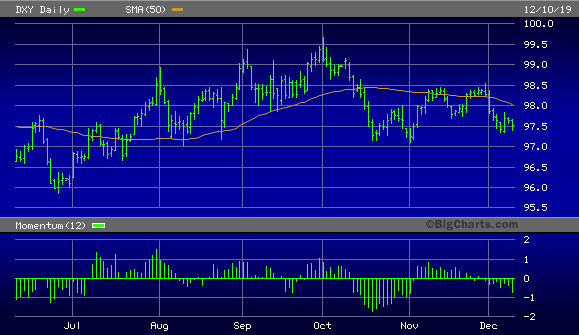 With several important fundamental and geopolitical factors converging right now, the likelihood of higher oil prices in the coming months is strong. A weaker dollar would almost certainly result in higher energy prices, as would the growing supply constraints (foreign and domestic) discussed here. Accordingly, investors should embrace a bullish intermediate-term outlook for oil and position themselves accordingly.

On a strategic note, I’m currently long the Invesco DB Commodity Index Tracking ETF (DBC). After confirming a technical breakout signal in early October, DBC remains above its rising 15-day moving average as of December 10. I’m using the $15.25 level as an intraday stop-loss on this trading position.

Disclosure: I am/we are long DBC. I wrote this article myself, and it expresses my own opinions. I am not receiving compensation for it (other than from Seeking Alpha). I have no business relationship with any company whose stock is mentioned in this article.