The earnings recession is worse than it looks on the surface. While GAAP earnings are down 1% over the trailing 12 months, core earnings are down 6%. The difference is earnings distortion, which just hit levels not seen since the last two market crashes. However, as is always the case, investors should not throw the baby out with the bathwater. There are sectors that are more profitable than they appear because earnings distortion is much lower or negative.

Figure 1: Earnings Distortion Rankings by Sector as of December 3, 2019

The takeaway is that while the largest, high-profile sectors have hidden risks. There are opportunities to be found in some of the less hyped, more defensive areas of the market.

In particular, the Consumer Non-Cyclicals sector, with -2.3% earnings distortion as a percent of assets, stands out as having the most understated earnings.

As we wrote when we put Mondelez (MDLZ) in the Danger Zone in April 2019, many large companies in the Consumer Non-Cyclicals sector have a declining competitive advantage due to the rise of e-commerce and shifting consumer tastes. There are real challenges facing companies in this sector, which is why KHC and others have taken significant write-downs.

Still, these write-downs may be leading some to believe that the profits in this sector are falling off a cliff, when in reality they are still fairly stable. Don’t let the headlines trick you into painting the entire sector with the same brush.

Figure 3 shows that the increasingly negative earnings distortion for the Consumer Non-Cyclicals sector is part of a longer trend. From 1998-2007, average earnings distortion stayed near zero, while over the past decade the difference between GAAP net income and core earnings has increased significantly. This trend aligns with the findings of the HBS and MIT Sloan paper “Core Earnings: New Data & Evidence,” which shows that the average number of income statement adjustments per company is rising significantly. Financial filings are becoming more complicated, and GAAP earnings are becoming a less reliable measure of profitability.

It’s more important than ever for investors to get high-quality research that analyzes more than income statements and press releases, which managers often dress up to appease investors in the short term.

General Mills (GIS) has some of the most understated earnings in the Consumer Non-Cyclicals sector and earns our Attractive rating. GIS’s TTM earnings are understated primarily due to three large non-recurring expenses:

Further, the stock looks undervalued compared to the rest of the market. At its current valuation of $53/share, GIS has a price to economic book value (PEBV) of 0.8. This ratio means the market expects after-tax operating profit (NOPAT) to permanently decline by 20%. This expectation seems pessimistic for a company that has grown NOPAT by 4% compounded annually over the past decade.

If GIS can maintain its 2019 NOPAT margin of 13% and grow NOPAT by just 4% compounded annually over the next decade, the stock is worth $100/share today, an 88% upside to the current stock price. See the math behind this dynamic DCF scenario.

The market seems to be valuing GIS based on its declining GAAP earnings, but diligence shows that core earnings are continuing a long-term trend of steady growth.

Analyzing Earnings Distortion Across the Rest of the Market

Figure 4 shows average core earnings grew by 24% compounded annually from 2015 to 2018, driven by rising commodity prices. From 2018 to TTM, core earnings declined by 21%

Figure 5 shows earnings distortion for the sector has remained relatively low for most of the past 20 years. The only exception is from 2012-2015 when volatility in commodity prices drove significant write downs. TTM GAAP earnings understate core earnings by an average of $56 million, or 14%, for the 146 companies in the sector we currently cover.

TTM core earnings are down for the Consumer Cyclicals sector after six consecutive years of growth from 2012-2018. Average core earnings declined 6% from 2018 to TTM, while GAAP net income is down just 2%.

At $24 million over the TTM, the average earnings distortion is the highest in the sector since 1998. Non-recurring gains are masking some of the real challenges Consumer Cyclicals firms face.

Similar to the Basic Materials sector, core earnings in the Energy sector rebounded from 2016-2018 due to rising commodity prices, but declined by 21% from 2018-TTM.

Aside from a couple of big troughs during commodity crashes in 2008 and 2015, GAAP earnings have been relatively accurate (minimal earnings distortion) in the Energy sector. The TTM trend in GAAP net income (down 27% since 2018) looks slightly worse than core earnings (down 21% since 2018).

Average core earnings are down 2% in the Financials sector from 2018-TTM, while GAAP earnings are up 8%. Investors who rely on GAAP likely think profits are better than they really are.

One reason for the spike in earnings distortion over the TTM period is the recent adoption of the accounting standard ASU 2016-01. The rule, which went into effect in 2018, requires unrealized gains and losses on securities to be recognized directly on the income statement, rather than waiting until the securities are sold. Due to this rule, Berkshire Hathaway (BRK.A) (BRK.B) has nearly $40 billion in unrealized investment gains artificially increasing its net income through the first nine months of 2019.

Average core earnings declined by 23% between 2018-TTM for the Real Estate sector, while funds from operations (FFO) – the preferred metric used by REIT investors – declined by 15%. 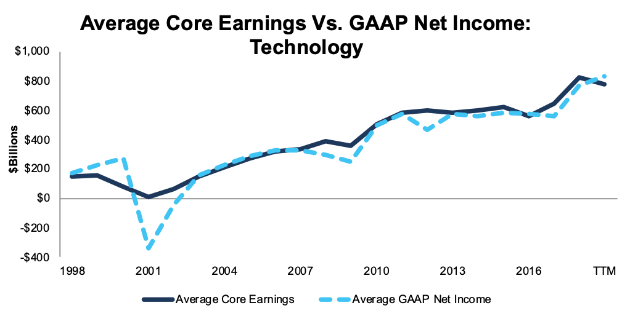 Despite the solid core earnings growth in the sector, average TTM GAAP earnings are down sharply, which leads to significant value opportunities for diligent investors. We recently made Verizon (VZ) a Long Idea due in part to its understated earnings from non-recurring restructuring and write-down charges.

Utilities also have rising core earnings and declining GAAP net income. Average core earnings are up 2% from 2018-TTM, while average GAAP earnings declined by 8%. Despite the core earnings growth, we still have an Unattractive rating on the sector due to its low ROIC and negative free cash flow.

Historically, Utilities have rarely had overstated earnings. 1998, 2004, 2007, and 2008 are the only years out of the last 20 when the sector has had positive earnings distortion.

This article originally published on December 4, 2019.

Get our long and short/warning ideas. Access to top accounting and finance experts.

This paper compares our analytics on a mega cap company to other major providers. The Appendix details exactly how we stack up.

2. Ernst & Young proves the superiority of our financial analytics over Capital IQ & Bloomberg.

If these prestigious institutions trust us so much that they decided to publish official papers to prove the superiority of our research, then you can safely trust us, too.

David is CEO of New Constructs (www.newconstructs.com). David is a distinguished investment strategist and corporate finance expert. He was a 5-yr member of FASB's Investors Advisory Committee. He is author of the Chapter “Modern Tools for Valuation” in The Valuation Handbook (Wiley Finance 2010).