Silver has been making lower highs and lower lows since hitting a peak at $19.54 per ounce on the continuous COMEX futures contract in early September. Gold rose above its level of critical technical resistance at the July 2016 high of $1377.50 in June and reached a peak at just under $1560 per ounce in September. However, silver did not challenge its July 2016 high at $21.095, as the precious metal underperformed gold.

Gold corrected to its most recent continuous contract low at $1446.20 in mid-November. Meanwhile, silver fell to a lower low during the week of December 2 at $16.475.

The many issues that face markets across all asset classes over the coming months and year could cause another surge to the upside in gold and silver prices. During the final weeks of 2019, silver is on sale at its current price, and risk-reward favors the upside for the beginning of the next decade, which is only a few short weeks ahead.

The current price weakness could be the perfect time to buy the ETFMG Prime Junior Silver ETF product (NYSEARCA:SILJ) as silver mining shares typically outperform the price of the metal when it rises.

Silver falls to a lower low

Silver continued to lag the price of gold over the recent weeks. While the yellow metal declined to a low at $1446.20 in mid-November, silver probed to new lows in December.

The weekly chart highlights that silver fell to a lower low at $16.465 per ounce on the continuous futures contract during the week of December 2. The price action was bearish during the first week of the final month of the year as silver put in a bearish reversal on the weekly chart. The price rose to a higher high than the prior week and then closed below the previous week's low. During the week of December 9, silver held the low as it fell to $16.47 and was trading last Friday at the $16.86 level. Anyone who has been trading silver for years knows that the precious metal loves to make head fake moves that confuse technical traders. Silver tends to experience lots of false technical breaks on the up and downside.

The end of the year tends to be weak in silver

Both gold and silver have exhibited seasonal price weakness at the end of the year.

The monthly chart illustrates that the silver futures market experienced selling pressure during the final months in 2014, 2015, and 2016, which led to price recoveries in January of the following years. 2019 has been a bullish year for gold and silver, but the prices of the two precious metals have been correcting and consolidating since making highs in early September.

Oversold and ripe for a January recovery

At below $17 per ounce as of Friday, December 13, technical metrics could be telling us that silver is setting up for another move to the upside in 2020.

The weekly chart displays that the total number of open long and short positions in the COMEX silver futures market declined from 239,093 contracts in August when silver was on its way to the high for the year at $19.54 to 204,359 contracts late last week. In a futures market, falling price and declining open interest is not a technical validation of a bearish price trend.

Price momentum declined to the 18.1 level, which is a deeply oversold condition for the precious metal. The last time the metric fell to the current level was in late May when the price was at $14.245 per ounce. Relative strength at just under the 46.90 level is marginally below a neutral level. Weekly historical volatility at around the 20.47% level has been elevated since May as the average weekly trading ranges in the silver futures market have expanded.

The bottom line is that the technical position of silver at the end of the year is a sign that a price recovery is on the horizon.

Silver tends to attract the most speculative trading activity in the precious metals arena. Since silver tends to move more than gold and other precious metals on a percentage basis, speculators often flock to silver when it looks like a trend is developing. Massive price movement does not frequently occur in the silver market. However, the history of price explosions and implosions drive market participants into the silver market in herds at times, which exacerbates price movement.

When it comes to the path of least resistance of the price of silver, the market's sentiment is critical. The crucial levels to watch over the coming weeks and months is the 2015 low at $13.635 and the 2016 high at $21.095 per ounce. Gold broke out above its 2016 high in 2019 and is still well above that technical level that stands at $1377.50 per ounce. Therefore, the price action in gold continues to put the spotlight on the upside in silver and the resistance level at just over $21 going into 2020.

Mining shares on sale during the holiday season

While silver can be a highly volatile precious metal, silver mining shares tend to move even more on a percentage basis. Most silver production comes as a byproduct of other precious and base metals primary mining. However, silver miners continue to explore for and produce the volatile investment and industrial metal.

Junior silver mining shares can be even more volatile than the leading companies that extract silver from the crust of the earth around the world. Selecting a specific junior silver mining stock can be a challenge. Idiosyncratic factors such as management, the location of mining properties, and government policies at production locations can impact share prices.

ETFMG Prime Junior Silver ETF product is a diversified product. The top holdings of SILJ include: 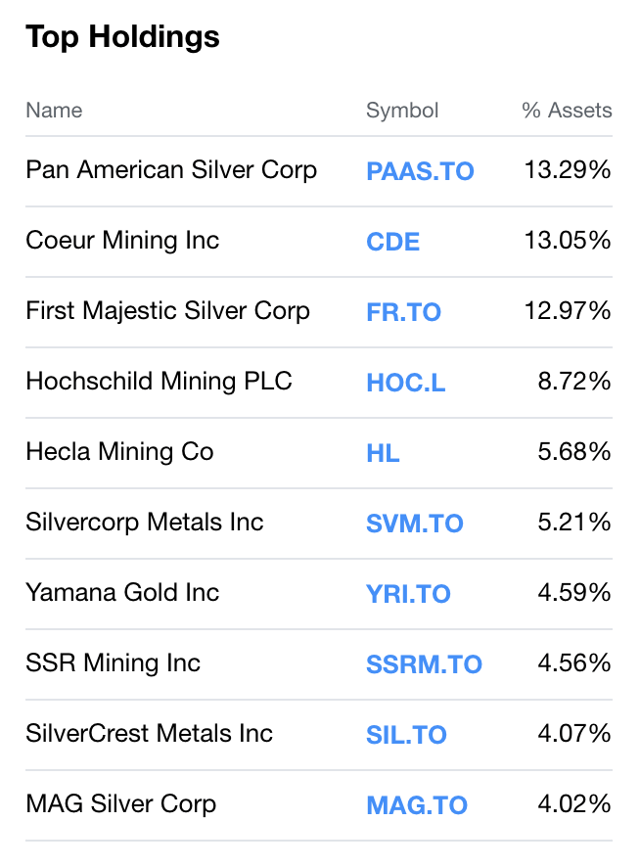 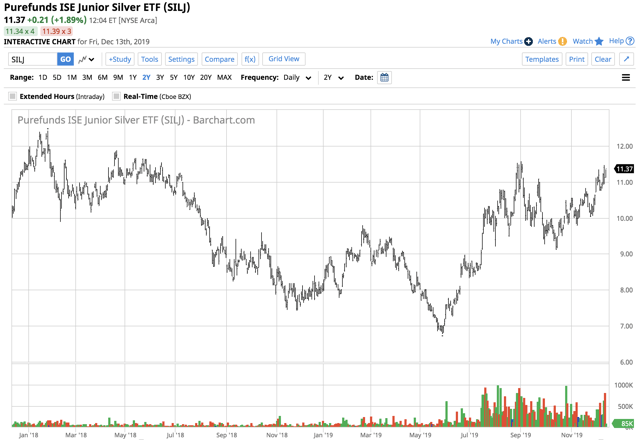 Over the same period, SILJ moved from $6.77 to $11.57 per share or 70.9%. SILJ delivered over a double percentage gain compared to the price action in the futures market.

In what could be a highly bullish sign for the silver market, the shares have continued to outperform silver during the current correction. Silver was trading at the $16.86 level on Friday, December 13, 13.7% below its early September high. At the same time, SILJ at $11.37 was 1.7% below its peak for the year.

For those looking to load on silver during the current sale period, junior silver mining shares could turbocharge results if 2020 is going to be a golden year in the silver market. The SILJ product diversifies risk in the highly volatile junior silver producer share arena.

I am offering a 20% discount for an annual subscription to my service, The Hecht Commodity Report, through December 2019. With the holiday spirit in mind, I am offering a free trial to the service. You can sign up via this link.

Andrew Hecht
27.9K Followers
Author of Hecht Commodity Report
Weekly commodities commentary and calls, from a Wall Street veteran
Andy Hecht is a sought-after commodity and futures trader, an options expert and analyst. He is the #2 ranked author on Seeking Alpha in both the commodities and precious metals categories. He is also the author of the weekly Hecht Commodity Report on Marketplace - the most comprehensive, deep-dive commodities report available on Seeking Alpha.

The author is long silver