"If tragedy never entered our lives, we wouldn't appreciate the magic." - Nikki Rowe

I have had a few questions around mid-cap oncology concern Exelixis (NASDAQ:EXEL) recently as the shares got a boost from the buyout of ArQule (ARQL) to start the week. A full investment analysis is presented in the paragraphs below as we revisit this name.

Exelixis is an Alameda, California-based oncology-oriented biotechnology company that focuses on forms of cancer that are especially challenging to treat. Leveraging research on model system genetics, the company has developed a commercially viable platform. Thus far, the company has brought to market three FDA approved products. Cabometyx and Cometriq were derived from Exelixis' flagship molecule cabozantinib. Cotellic, a formulation of cobimetinib, is marketed via a collaboration with Genentech. Furthermore, in January of 2019, Daiichi Sankyo (OTCPK:DSKYF) announced the marketing approval in Japan for Minnebro for the treatment of hypertension, which was developed by Daiichi Sankyo, but was one of the compounds identified during the research collaboration with Exelixis. The company's pipeline is comprised of its two lead compounds cabozantinib and cobimetinib, and the company also has two early-stage assets known as XL092 and XL888. Exelixis trades for around $18 a share and has a market capitalization of roughly $5.4 billion.

Cabozantinib is a targeted agent that inhibits the activity of receptor tyrosine kinases such as MET, AXL, VEGF Receptors, and RET. The RTKs are involved in normal cellular function and in a variety of pathologic processes: oncogenesis, metastasis, tumor angiogenesis, and the tumor microenvironment. Exelixis has exclusive rights to commercialize the product in the United States, but Ipsen has exclusive commercialization and development rights for current and future cabozantinib indications outside the United states, except in Japan, where Takeda (OTCPK:TKPHF) has exclusive rights. 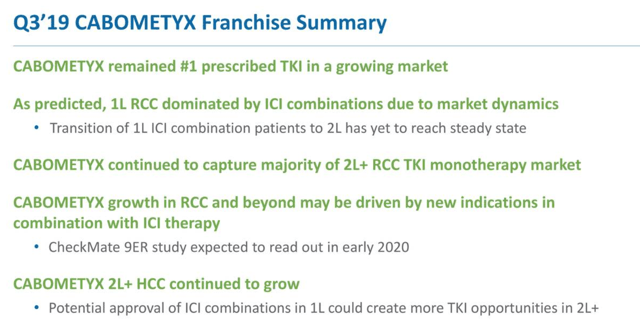 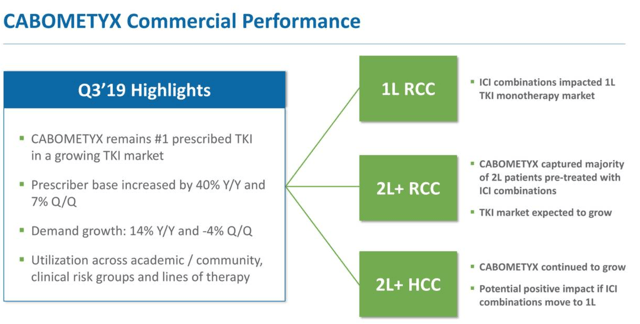 On the most recent earnings conference call, management stated that it responded to the Cabometyx ANDA by filing a lawsuit to enforce intellectual property rights. Thus far, management thinks that the ANDA filer is not challenging its composition of matter patent, which expires in mid-2026. The company hopes to achieve a few things through the lawsuit, but chief amongst them is for the FDA to not approve the ANDA until the company's primal patent expires. Management didn't want to discuss its litigation strategy beyond what it did in its prepared remarks; however, it stated that it has been preparing for this moment for the past 12 to 18 months as it is an all too common part of business with a successful small molecule. Furthermore, management said that it feels "very good" about its team of legal experts and it has "a high degree of confidence" in the IP and the data backing the IP. 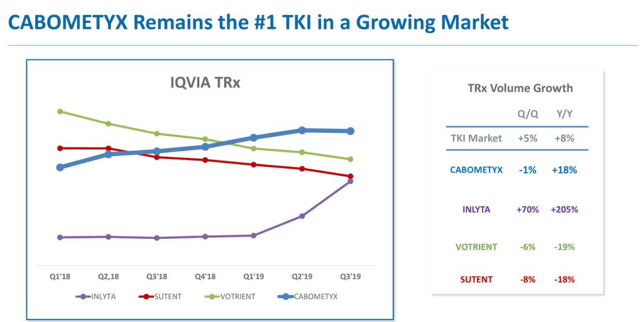 Currently, Cabozantinib is being evaluated in four ongoing pivotal, Phase 3 trials: CheckMate 9ER, COSMIC-313, COSMIC-311, and COSMIC-312. Key data from some of the trials should be available in 2020. Additionally, the company will be launching new pivotal trials in 2020 in an effort to further expand the cabozantinib franchise. Also, the company's partners continue to work diligently on expanding the market for cabozantinib overseas. In April of 2019, Takeda completed its NDA filing with Japanese regulatory authorities for cabozantinib in patients with advanced RCC.

Cobimetinib is a reversible inhibitor of MEK, which is part of a pathway that is often dysregulated in human tumors. Cobimetinib is being developed by Genentech. The drug, trade name Cotellic, is approved in the United States, European Union, Canada, Australia, Brazil and Switzerland to treat specific forms of BRAF mutation-positive unresectable or metastatic melanoma, in combination with vemurafenib. The drug is currently being tested in numerous indications and is being tried in a variety of combination regimens. 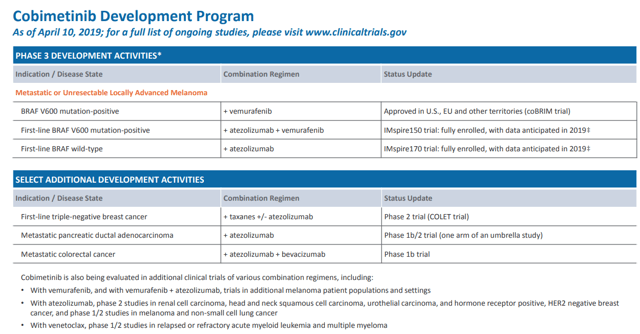 The company beat estimates on both the top line and the bottom line. Revenue came in at $271.1 million, up 20.5% year-over-year. However, of the $271.1 million, $79.9 came from its collaboration partners Ipsen (OTCPK:IPSEY), Takeda, and Genentech. Also, for the first time, the net revenue for the global cabozantinib franchise exceeded $1 billion over four consecutive quarters if one includes collaboration revenues. Overall, the company had a net income of $97.5 million in the quarter compared to approximately $125 million in the same period of last year mainly due to increase in R&D expenses as Exelixis advances several trials. 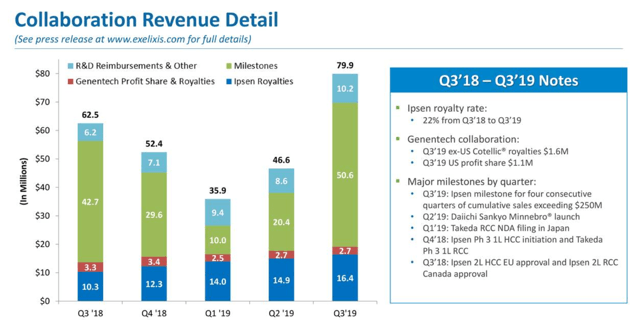 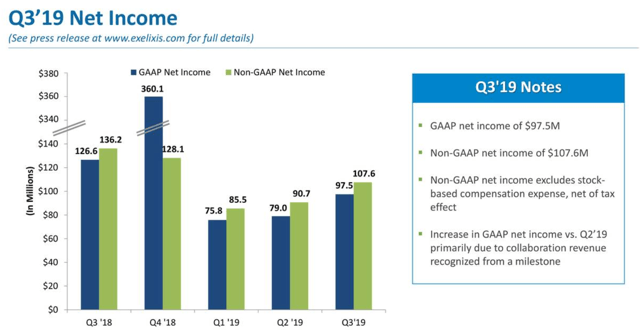 Cabometyx sales came in with only a three percent sequential rise for the third quarter and an approximate 18% year-over-year increase. Until additional indications are approved, Cabometyx probably will be a $800 million year drug not counting milestone payouts. If you take out cash of approximately $1.2 billion, Exelixis' market cap is around $4.2 billion, so the company is priced at five times recurring revenues.

The company is much cheaper on a free cash flow basis as it has generated north of $100 million on average per quarter this year. Accounting for cash, that is an approximate 10% free cash flow yield. In addition, that cash flow should increase nicely as additional indications are approved which will increase revenues and significantly lower R&D expenses.

Outside a buyout, EXEL is probably range-bound until new trial results come out or until progress is made on the patent litigation front. I think there is some good longer-term value in this name and it can be accumulated slowly on dips. I also think it makes an ideal buy-write candidate at these levels and that is how I have added to my core position in recent months.

I present and update my best small-cap biotech stock ideas only to subscribers of my exclusive marketplace, The Biotech Forum. Try a free 2-week trial today by clicking on our logo below! 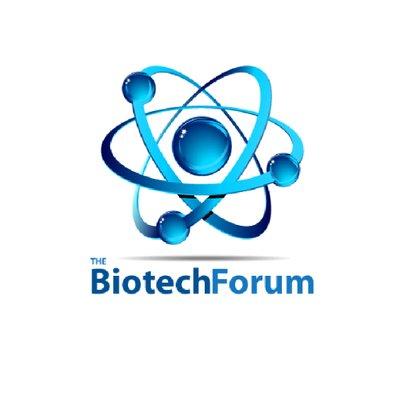 Disclosure: I am/we are long EXEL. I wrote this article myself, and it expresses my own opinions. I am not receiving compensation for it (other than from Seeking Alpha). I have no business relationship with any company whose stock is mentioned in this article.