Gold has been going through a correction for months now.

Yes, it is still all about the Fed.

Gold could trade down to around the $1,400 before going higher again.

Nevertheless, the Fed will still need to expand the monetary base due to America's massive national debt problem and the likelihood of an upcoming recession. 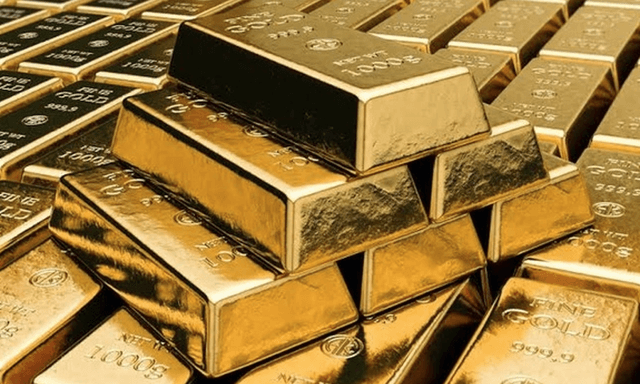 Gold has been in a downtrend for more than three months now. Ever since the yellow metal hit a price of roughly $1,566 in early September, gold has been melting, making lower highs and lower lows. Gold is now roughly 6% below its recent highs and appears to be stuck in a prolonged downward sloping trading range. 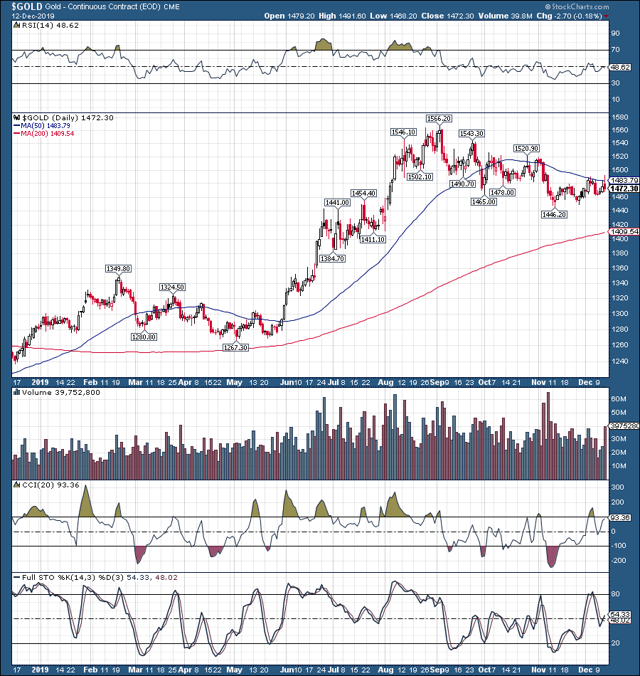 The problem? The economy seems to be back in stable mode, the employment picture is robust, inflation is in the Goldilocks zone, and the stock market is back at new all-time highs. Therefore, the Fed is not likely to cut rates any time soon, which is putting pressure on gold and other precious metals (PM) related prices.

However, this may be a short-term phenomenon, as the economy could start to weaken once again in 2020. Furthermore, the economy has shown an inability to function effectively with interest rates at marginally higher levels. Additionally, fundamentally not much has changed from a long-term perspective, as the U.S.’s national debt continues to spiral out of control and the inevitability of a recession are still on the horizon.

Despite the likelihood of a period of relative calm and subdued price action in the gold, GSM (gold/silver/miners) market, this segment is likely to do particularly well long term as prices are likely to appreciate substantially over the next several years as well as decades.

Yes, It’s Still All About the Fed

I recently wrote about the remarkable resilience of the U.S. economy, as the latest employment, inflation, and perhaps most importantly consumer data has been coming in stronger than expected. The bottom line is that with an “official” 3.5% unemployment rate (lowest in about 50 years), inflation below 2%, and with the stock market raging on to new all-time highs, the Fed is not going to lower rates.

In fact, if we look at what market participants are expecting now, it’s that there is only about a 53% chance that the Fed will come through with any rate cuts next year. The market provides about a 47% probability that rates will remain where they are today essentially throughout all of 2020. 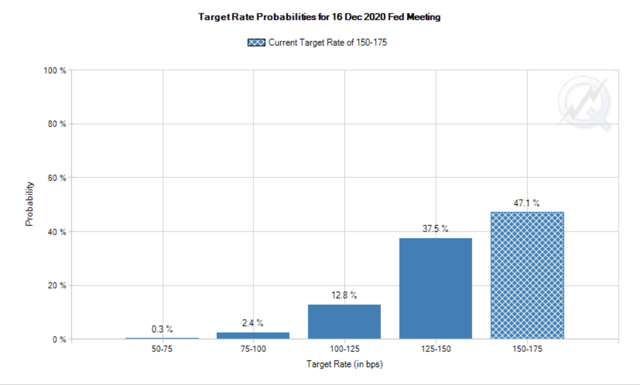 This is not great news for gold, but on the other hand, it is not terrible either. It appears that the market has figured out that the economy is not likely to withstand higher rates, thus, no rate hikes are priced in for next year. We also saw a significant slowdown when rates were slightly higher in 2018. In addition, there is the massive national debt that needs to be serviced continuously and would likely substantially weaken the U.S. economy in a higher interest rate environment.

Fundamentally, Long Term Nothing Has Changed

Longer term essentially nothing has changed. Despite the relatively robust economic image now, the economy could begin to stall and require more monetary stimulus at any time. In fact, rock bottom unemployment, and other metrics like sky high consumer sentiment are typical towards the end of an economic cycle. You can read in more detail about this phenomenon in my article here.

Gold Moves in Tandem with the Money Supply

Despite the dollar and the global fiat monetary system being decoupled from gold, gold prices essentially move in tandem with the U.S.’s ever expanding monetary base over time. You can read more about the correlation in this detailed analysis here. It is not likely that the Fed will decrease the monetary base as it was previously thought the Fed would. QT and higher interest rates illustrated that the U.S. economy couldn’t grow effectively under such conditions in 2018.

Therefore, it is likely only a matter of time until the Fed is confronted with another round of easing as the current expansion cycle ultimately begins to show signs of fatigue once gain. This may happen sometime in mid to late 2020 in my view. Thus, the Fed will likely bring rates close to or down to zero and will likely implement QE like programs to attempt to prevent a recession, then try and engineer a soft landing, and to ultimately attempt to stimulate the U.S. economy out of a recession.

Out of Control Government Debt

Another factor why the Fed will probably not raise rates and will instead have to lower them and introduce fresh rounds of QE is the enormous $23 trillion national debt. The national debt is simply remarkable, as it is now at about 107% of GDP, and the “actual” federal budget deficit is roughly $1.3 trillion. The servicing payment on this debt is going to be roughly $400-$500 billion just this year alone, as the national debt is largely comprised of 5-, 10-, and 30-year treasuries. 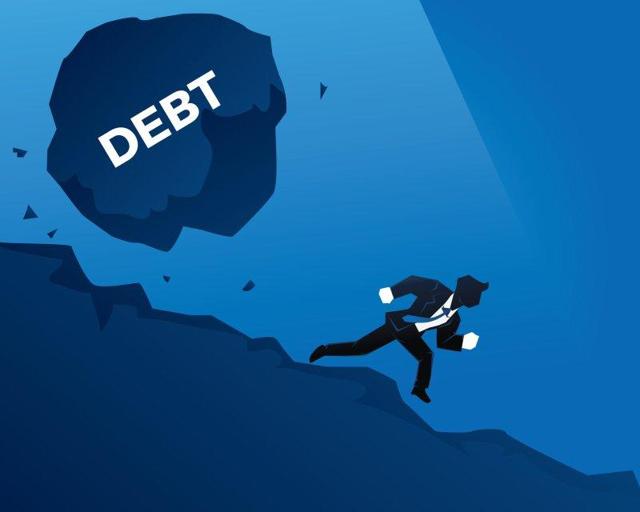 Just for reference, national debt to GDP was at about 35% in 1980, and was at 55% in 2000. Now, at 107%, it is starting to impact the ability of the U.S. economy to grow. Furthermore, the higher the debt to GDP ratio grows, the more pressure the debt and its servicing will weigh on the U.S. economy. It’s a good thing that rates are relatively low.

Let’s imagine for a second that the 10-year was at around 3%, the 5-year was at about 2.5%, and the 30-year was at 3.5%, not very high by historical standards, yet that would imply the servicing payment on the U.S. national debt would be roughly $700 billion in one year, and that’s if we use the current $23 trillion figure. We can see that with higher rates, the picture with the national debt could quickly get out of control and possibly create a prolonged low or no growth economic environment much like we’ve seen in Japan for decades now.

Therefore, the Fed will likely need to lower rates not only to try to avert (engineer a soft landing) and stimulate the economy out of its next recession, but also prevent the U.S. from defaulting on its national debt. After all, the Fed can print as many dollars as it wants, lower rates to zero if it pleases, and essentially inflate the debt away eventually. This scenario appears like it will probably need to play out within the next 5-10 years, which is extremely bullish for gold and the entire PM complex.

Another factor I wanted to mention was the gold to silver ratio. Despite recently coming down from an unprecedented level of nearly 95, to around 87, the ratio is still extremely elevated by historical standards. This implies that we are still likely in the early stages of the current bull market cycle in gold and other GSM related assets. We’ve seen extremely high gold to silver ratios lead to major rallies or bull markets in the past, like in the early 2000s, around 2009, in early 2016, and most recently several months ago. It is possible that the ratio may have topped out earlier this year, and the next wave higher in gold prices may be coming relatively soon. 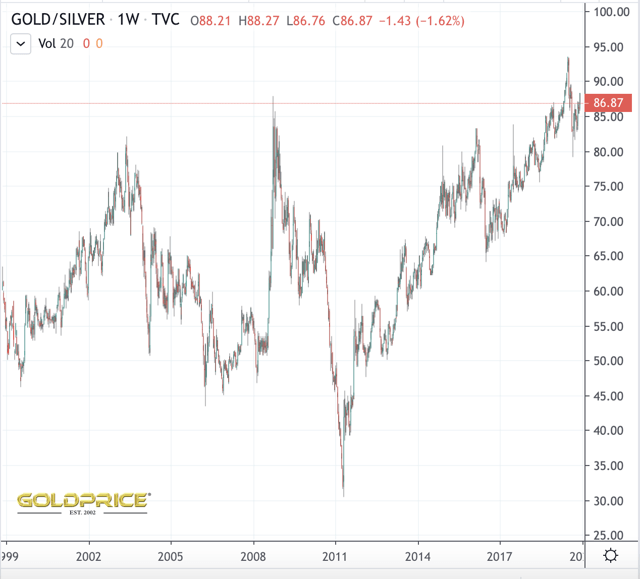 It appears like the Fed and other favorable factors have stabilized the U.S. economy for now. Despite it being late in the cycle, the employment picture looks strong, inflation is not too hot nor too cold, the consumer still appears relatively healthy, and stocks are at all-time highs. Thus, the Fed has no reason to continue to lower rates or increase the monetary base substantially by providing QE right now or possibly any time in the next 6-12 months.

Therefore, gold is likely to trade around for a while. We’ve seen about a 6% correction, but it would be nice to see a real pullback of around 10%. This would be healthy for the market, would bring gold down to around the $1,400 level, and would likely create a very compelling long-term buying opportunity in my view.

Nothing material has changed long term. The U.S. still has a huge national debt problem it will need lower rates to service effectively. The recession may have been put back a few quarters, but it will still likely arrive within the next year or two. Also, many market participants likely realize that the “new normal” economic reality is an economy with much lower rates. Furthermore, the Fed will likely substantially increase the monetary base through QE like programs to stimulate the economy before, during and after the next economic slowdown and to “help” with the national debt problem.

Regardless of short-term gyrations, gold is very likely moving a lot higher over the next several years, and likely decades.

Want the whole picture? If you would like full articles that include technical analysis, trade triggers, portfolio strategies, options insight, and much more, consider joining Albright Investment Group!

Disclosure: I am/we are long GOLD AND OTHER GOLD RELATED ASSETS. I wrote this article myself, and it expresses my own opinions. I am not receiving compensation for it (other than from Seeking Alpha). I have no business relationship with any company whose stock is mentioned in this article.

Additional disclosure: This article expresses solely my opinions, is produced for informational purposes only and is not a recommendation to buy or sell any securities. Please always conduct your own research before making any investment decisions.

Follow Victor Dergunov and get email alerts
+
Add a comment
Disagree with this article? Submit your own.
To report a factual error in this article, click here.
Your feedback matters to us!