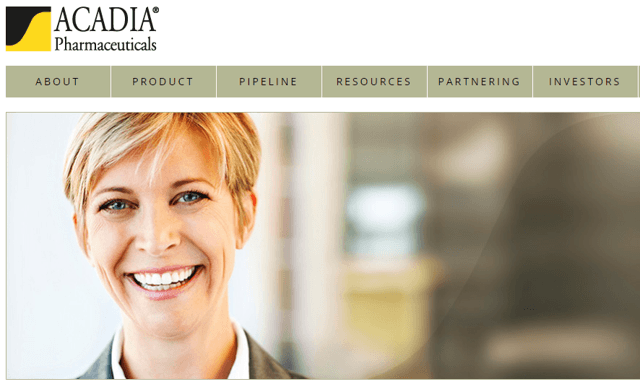 Acadia And Proteostasis: Risk On?

Since June of 2017, I have presented my system's top 10 names to my Marketplace subscribers each week. So far, we have full six-month performance numbers for 106 of those top names cohorts, and they have outperformed the SPDR S&P 500 ETF (SPY) by 2.4% annualized on average. Last month, I described changes we made in our ranking process (Finding Alpha In Security Selection). Those changes essentially prioritized less risky names. So why did two biopharmaceutical companies, Acadia (ACAD) and Proteostasis (PTI), appear among the top 10 names I presented to my subscribers on December 5th? In this article I explain why. First, a brief explanation of our security selection process, and a note about risk as I'm using the term here.

Our selection method starts by assuming that securities returns tend to revert their long-term means. So we start by looking at the average six-month return of a security over the long term (the last 10 years, in most cases) and its most recent return, and assume, initially, that the return over the next six months will be the average of both. Then we adjust that assumption up or down by gauging options market sentiment by looking at the cost of hedging the security over the next six months in different ways.

Risk is often used interchangeably with volatility, but I think this can be misleading when discussing individual securities, because they can suffer catastrophic losses and not recover. When I used risk above, I meant it as a shorthand of a measure of risk: namely the cost of hedging a security with optimal or least-expensive put options. As I mentioned in my article last month, we had found that securities hedgeable against declines of >9% with optimal puts outperformed those that couldn't be hedged that way by about 3% over six months (see the figure circled in red below). We also found that names that could be hedged against >6% declines that generated an additional outperformance of about 5.26% (figure circled in blue below).

These were our top 10 names on December 5th. In addition to PTI and ACAD, the other top names were Equity LifeStyle Properties (ELS), Anixter International (AXE), the iShares QQQ Trust (QQQ), Toyota (TM), the iShares Silver Trust (SLV), the iShares MSCI Taiwan ETF (EWT), The Southern Company (SO), and Acacia Communications (ACIA).

Note the column I've circled above: "AHPx". The numbers in that column indicate the smallest single-digit decline threshold at which it's possible to hedge that name over the next ~6 months with optimal puts. There is a "6" in that column for each of the top 10 names except for PTI and ACAD, for which that column is blank. The reason why PTI and ACAD appeared in the top 10 despite that is explained by the column titled "w/Cap Drop" (circled in blue, below).

In the case of PTI, the w/Cap drop figure was 78%, and in the case of ACAD, that figure was 46.7%. What that meant in the case of PTI was that it was possible to hedge it over the next several months against a >9% decline with an optimal collar capped at 78%. In other words, you could hold PTI in such a way that your best-case scenario was a gain of 78% by next July and your worst-case scenario was a decline of 9%. That ratio of potential upside to potential downside is extremely rare in collared positions. In the case of ACAD, the ratio was 46.7% to 9%. After deducting the cost of hedging, those ratios were still very attractive: ~71% to 9% for PTI, and ~41% to 9% for ACAD.

Wrapping Up: A Nuanced Approach

We've found that less risky securities (as we define them, by hedging cost) tend to do better than riskier ones on average, and we've quantified the extent to which they do better. Because we've quantified that, we don't automatically disqualify riskier securities. Instead, we're able to weigh the average performance advantage of less risky names against the upside potential of riskier names. In the case of PTI and ACAD, their greater upside potential earlier this month won out.

Since I presented these names to my Marketplace subscribers on December 5th, ACAD is up 0.84% and PTI is up 12.14%. To see this week's top ten names, you can sign up for a free two-week trial here.

David Pinsen
18.78K Followers
I developed the hedged portfolio method of investing at Portfolio Armor, and I run a Marketplace service at Seeking Alpha based on it called Bulletproof Investing.